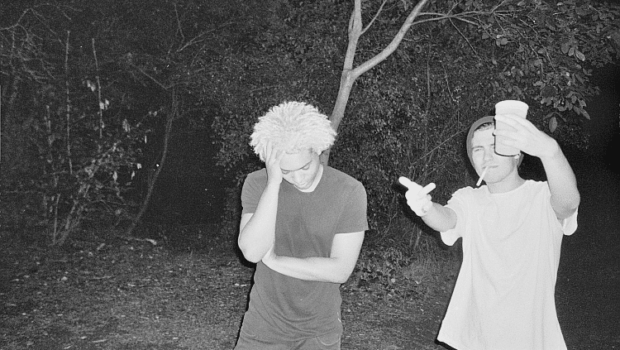 Well, the results are in. Law students as well as old school hip-hop fans have decided that CRACK IGNAZ truly is King of the Alps. In 2015 he released his pink coloured debut album “Kirsch” (Cherry) and in January 2016 he released his second LP “Geld Leben” (Money Life), a cooperation with his colleague WANDL. Julia Philomena spoke with the man JUICE Magazine declared to be the “Rap-Messiah”.

You presented your latest album as part of a free show at the Electric Spring Festival in the Museum Quarter in Vienna. The audience was a mix of random passersby and fans. How did that go?

Crack Ignaz: I think there were a lot of people there who had never heard of me. With an audience that is hearing your music for the first time, it isn’t as much fun as with one who knows your songs and what is going to happen. You can interact with them and build the show better. It doesn’t bother me if people aren’t receptive to my music, but the energy is different. When the right energy is there during a show, it’s killer.

Why does Crack Ignaz like to work with Wandl and other colleagues?

Crack Ignaz: I like making music with others, because it’s better live. The more people on stage, the more fun the show. And I make music with Wandl because we have been friends for, I think, three years and he is a super producer and live DJ. That says everything.

How does your collaboration work?

Crack Ignaz: We recorded “Geld Leben” at Wandl’s place in his studio. Although, when is a room a studio? No, he doesn’t have a studio (laughs) What helps is our lifestyle similarities. We like to go out together, have similar interests and are inspired by life in Vienna.

It seems like the world is your oyster. Or at least, Austria and Germany. Why?

Crack Ignaz: Because I make dope shit! No, I actually believe that in reality everyone loves hip-hop. If someone doesn’t, it’s probably just because hip-hop isn’t easy for everyone to decipher. You have to be open for aggressive hip-hop for example. The aggressive scares a lot of people right away. I also have aggressive tracks. Actually, I have covered almost every base in the hip-hop genre. That, naturally, can’t appeal to everyone equally.

How important is it for you that hip hop stays true to its roots?

Crack Ignaz: I think it is important to know about hip-hop’s roots. But you also have to understand them. It’s probably even more important to understand what hip-hop stands for. For me it was always something very progressive…I don’t think any other music genre has changed so much while keeping the same name. Rock and it’s hundreds of variations are totally different.

According to our parents generation America was the land of opportunity and every dishwasher could become a millionaire. How should we understand your fascination with money?

How important is it for musicians to have a media strategy?

Crack Ignaz: I think band logos, music videos, the whole thing surrounding the music is really important for commercial success. Just music is great, but it’s not enough to build an audience. People need some things to connect with. Consumers need something to identify with. Visuals are really effective for quick success. And of course social media and YouTube. It’s a way for people to become popular who never would have been able to before.

The golden age of MTV and the era of the 00’s, with the squeaky clean US productions, Britney Spears, Backstreet Boys, 50 Cent, are over. There isn’t just one channel for music video any more. There are thousands. But popular music isn’t so terribly sterile and packaged anymore either.

I am only rarely interested in the person behind the music.

How genuine is the person behind Crack Ignaz? We don’t know your name or your age. Why don’t you share more about yourself?

Crack Ignaz: Because I don’t feel I need to. I am only rarely interested in the person behind the music. That frequently destroys things. I celebrate the persona in my head and am happy with that. I can understand that some people want to know which soup Justin Bieber had for lunch; curiosity is natural and sharing personal stuff can be good marketing. But I’m still not going to share, I don’t want to be a fucking b-list celebrity (laughs).

So what is your goal?

Crack Ignaz: World domination! (laughs) Honestly, I don’t have a goal, because I don’t think I am ever going to quit. World domination really would be the only possible goal that doesn’t have anything after it.

How important is provocation as a stylistic element?

Crack Ignaz: I love to provoke! It makes people think and it is fun. The reactions can be so ridiculous sometimes, it’s funny. My track “König der Alpen” (King of the Alps) is pure provocation. A lot of people don’t notice it, but there are people who get really upset that a “Neger” claims to be king of the Alps. There is a whole category of really evil comments to the video.

What was your personal musical highlight on “Geld Leben”

Crack Ignaz: It’s always changing, but right now “Wellen” (Waves). I’ve always thought that track was the most likeable. The whole album is a snapshot of Wandl and me. An impression of the patterns that result when you throw us up against a wall. But depending on my mood I like some cuts better and some worse…

Any future plans together?

Crack Ignaz: I can’t force it. whatever will be, will be. I am looking forward to the second round of the NASA Universe tour with LGoony mid May though.

In an interview you said once that Crack Ignaz could imagine doing pop. What are your plans?

Crack Ignaz: Well, the track „LE PREMIER PRINTEMPS“ was pretty kitschy. And it’s true that I wouldn’t shut myself off from any music genre because you can learn so much through music. Emotions can be called up that you never experienced before, and you can begin to see the world through other peoples eyes, people you might never actually get to meet. And it is especially interesting with pop, to filter out and understand the elements that appeal to the mainstream. And to analyse why they work.

Why are you the best rapper in Austria?

Crack Ignaz: There are always a handful of people who are best at whatever. In this country, no one has ever claimed to be the best rapper. So I did. (laughs) I said it years ago, and everyone knows it. I invite everyone to challenge me (laughs)