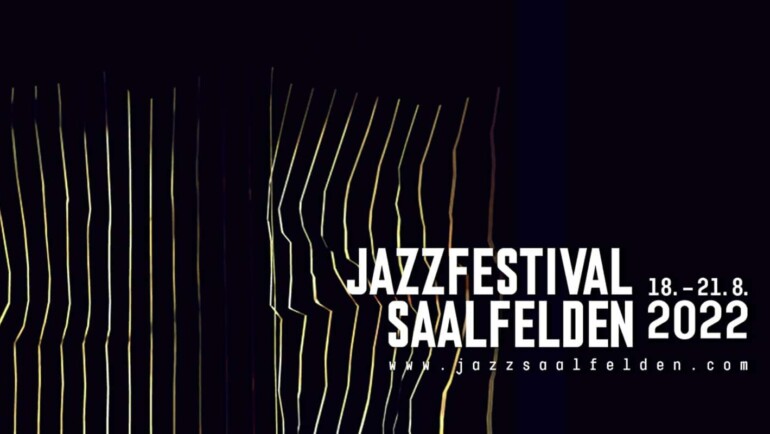 From August 18th to 21st, 2022 the 42nd INTERNATIONAL JAZZFESTIVAL SAALFELDEN will take place! What’s in store, you ask? A nature-infused musical playground with around 60 concerts – in the city, the woods and meadows, music hikes in the midst of the idyllic alpine mountains and, of course, plenty of surprises! This year, the festival has chosen not one, but two Artists in Residence: Austrian musician Katharina Ernst and Norwegian artist Gard Nilssen, who will each present four projects. For all the yummy festival details and look into the lineup, read on!

About the 42nd edition:

With the Mainstage and the Short Cuts, the festival returns this year with those stages that are especially dedicated to international formations. Last year, the Otto-Gruberhalle, a vacant industrial hall from the 1950s, was used for the first time as a stage. The Otto-Gruberhalle is also an integral part of this year’s edition and will be integrated into the Mainstage concert ticket for the first time. The bookbindery Fuchs and the stage in the forest Kollingwald will once again become a place for spontaneous musical encounters. Furthermore, the roofed city park as well as the evening concerts in the Kunsthaus Nexus will become the meeting point with free admission. For the first time, the restaurant Brücklwirtshaus in Saalfelden, a historic building that was first mentioned in a document around 1400, will be a venue as well. Two impro sessions will take place there on Saturday and Sunday.

Mario Steidl, the artistic director of the festival, has nominated two Artists in Residence, Austrian musician Katharina Ernst and Norwegian artist Gard Nilssen, who will each present four projects.

Irritation and composition, the overarching and attacking art of combination, seem to be paramount for the percussionist and painter. Born in Vienna, studied in France and living in Berlin, Katharina Ernst particularly appreciates the performative and chaotic, the polyrhythmic and polymetric aspects of her often electronically supplemented drums, her instrument of choice since the age of nine. Music, art and choreography complement each other in her work, from the theater stage via the gallery or the concert hall to the club. Always moving, always in motion, as can be witnessed in her various projects as part of her “artistic residency” at the Jazzfestival Saalfelden 2022.

This year, the Austrian bassist and composer Lukas Kranzelbinder (Shake Stew, Mario Rom’s Interzone) is once again hiking together with the audience on various hiking paths in search of a sound that is open in all directions and to give the mountain as a place of tradition a new musical facet. On Thursday, he has gathered no one less than Astrid Wiesinger, Cuong Vu and Ted Poor around him to climb the idyllically situated Lettlkaser Alm (1,442 Hm) not only musically. On the hut, a beautiful final concert and a tasty snack with homemade products as well as a magnificent view of the Leoganger Steinberge and the Saalfelden basin await you.

For more than two decades, the groove giant from Graz has been bringing the classic sound of Jimmy Smith’s or Brother Jack McDuff’s Hammond B3 organ trio into our times. Supported by his “Soul Gift Band” with Enrico Crivellaro, guitar, and Eric Cisbani, drums, as well as the legendary soul singer Gisele Jackson from Brooklyn, known for her work with Ray Charles or James Brown, Raphael Wressnig transfers the Funk, R&B, and Boogaloo from his organ-izing fingertips and soles straight to the audience’s dancing legs. Party Factor 100%.

Gypsy music and folk melodies from the Balkan region fuel the (belly) dancing energy and elegance of this geographically and culturally border-crossing project. Founded by the late percussionist Alexander Zechbauer and refined during his extensive travels through Southern Europe, the OstBeatBend revives the fascinating spark of these powerful traditions with their unique interpretations at each of their rousing concerts.

VENTIL is a discharging pack of energy, an “audio-visual band”. Delicate, shimmering and solid sound particles are combined with powerful and complex rhythmic structures, visually framed by live-generated video and light architecture. The intersection of sound and vision conjures up an immersive vortex of tremendous intensity, manifesting itself in a musical monolith drawing on influences from industrial, sound art, techno, tribal and shamanism, exciting audiences from jazz to club and sound art festivals.

PILED UP by Tanrikulu

The singing force of nature that is Cansu Tanrikulu can hardly imagine bigger favorites on bass, guitar and drums, than the three gentlemen in her band “Piled Up”. The fact that the “pile” in the band name originally meant something closer to “arrow” makes sense: all four members of “Piled Up” are spearheads of the improvisational scene, as well as being multidimensional multi-instrumentalists. “A new opportunity for me to test my current compositional ideas,” as the leader explains.

Once upon a time there was a traditional gypsy trio. Because they also liked folk, jazz, metal, rock, hip hop, reggae, Wienerlied or Austro-Pop and had cultivated sarcasm as well as skillful nonsense, they adulterated their Gewürztraminer with a mixed (brass) set. Ever since then, this ten-headed hydra has been inspiring audiences as a mixture of party-patrol and romance laboratory, always a boundless and emotional force of nature.

With the opening of the Jazzfestival Saalfelden, the Vienna-based saxophonist, who found his second musical home in New York early on, is fulfilling a lifelong dream. The premiere of “observer” with his new band RUCKER brings together some of the exceptional artists that Rucker, himself “a revelation” for Allaboutjazz, has met on his journey so far. They combine energy and expressiveness, an unmistakable sound and the driving pulse of their music, which stylistically oscillates openly between tradition and modernity.

Hip Hop meets pop, Indie joins Rap: the musicians not only overcome and combine genres in their interaction – as Sharktank they also open up a niche on the German-speaking music market that we didn’t know existed until now. In a place where playful feel-good beats and light-hearted instrumentals meet conscious rap and melodic vocals, this band from Vienna has found its colourful, unique sound – jump in, if you dare, and swim along!

This year, the Austrian bassist and composer Lukas Kranzelbinder (Shake Stew, Mario Rom’s Interzone) is once again hiking together with the audience on various hiking paths in search of a sound that is open in all directions and to give the mountain as a place of tradition a new musical facet. On the second hike on Saturday, the idyllically situated Steinalm (1,268 Hm) is climbed not only musically. On the hut, a beautiful final concert and a tasty snack with homemade products as well as a magnificent view of the Saalfelden basin await you.

Felix Kramer is a Viennese songwriter who plays on the dark strings of life and sings heart-wrenching songs of heartbreak and abandonment, as well as the callousness and brutalization of society and politics.

Extrametric is the name of the 2018 debut solo record by drummer Katharina Ernst, who currently lives in Berlin. She explores polyrhythms in several ways, ranging from groovy tracks to abstract compositions and ecstatic outbursts at the drum set. After numerous shows throughout Europe, Extrametric will now be presented for the first time at the Jazzfestival Saalfelden.

Stravinsky, Zappa or Gil Evans, composers in general, “who are themselves confused about their influences, who are simply full of curiosity and not afraid to venture into new territory” inspire the work of Christoph Cech, winner of the (musical) Art prize of the Republic of Austria and significantly involved in the Austrian big band scene for over thirty years. With his seventeen-piece jazz orchestra project, put together for the Porgy & Bess in his hometown of Vienna, the composing pianist brings his musical visions to life in an exciting and sonorously satisfying way.

An aluminum-foiled mystery on bass and vocals, together with the international rhythm prodigy Herbert P. from Vienna, tears the roof off this mother. Electro-Soul and balladesque P-Funk with lyrics that are only superficially funny, combining “bass, drums and dirt” – a thought-jump cloth of joyfully uncomfortable odes versus body-shaming (“Dick) or patriarchy (“Penis”).

From Vienna via Graz to rural seclusion in Eastern Styria, the two brothers from Yukno create a sound that creates a danceable sound with indie pop and electronica, full of lyrical sophistication. After working with Lina Maly, Girlwoman or musicians in Zanzibar, they recently released the single “Risse” with Betterov and their Mixtape Eins – melancholic dance music for the here and now.

Those who have been lucky enough to experience the festival’s closing in previous years have witnessed legendary evenings at the Nexus Bar.

Under the direction of the Austrian bassist and composer Lukas Kranzelbinder (Shake Stew, Mario Rom’s Interzone), various musicians will bundle the energies they have gathered over the course of the festival and unleash them on the audience.

Lyrical suites about guardians of dragons or moon jackets – the “Instrumental Art Pop” of the duo “Sinfonia de Carnaval” creates mini-symphonies with accordion, cello and trombone, as dreamlike and sad as the morning after the carnival. With Anna Lang and Alois Eberl, elements of jazz and pop meet electronic sound universes and the full spectrum of classical playing techniques, appropriately inspired by Latin American rhythms, funk and rock.

The end of the festival has always been a legendary evening full of surprises at the Nexus Bar, especially since the Spiritual Unities were launched. Under the direction of the Austrian drummer Lukas König, various musicians will bundle their energies gathered during the festival and unleash them on the audience. Unite des spirits!