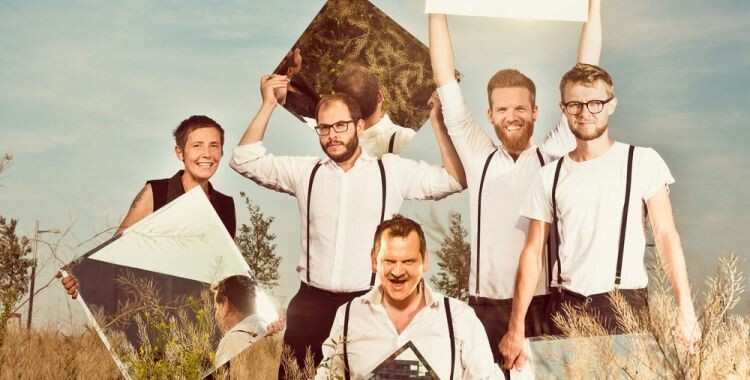 In 2015 the Austrian music scene will once again showcase its outstanding musical qualities on an international stage. Following Austria’s turn in the spotlight at the 2014 edition of Eurosonic Noorderslag Festival in the Netherlands, the coming year will continue in that vein at the Internationale Kulturbörse Freiburg, the international trade fair for stage productions, music and events (January 26 – 29, 2015). As the focus country of the Internationale Kulturbörse Freiburg 2015, the emphasis will be shifting to the Austrian world music and jazz scene and will feature its tremendous talents – among them 5/8erl In Ehr’n.

5/8erl in Ehr’n are considered as the inventors of “Viennese Soul” and are consistently praised in the Austrian media as a combination of “catchy, witty, sad and funny”. This very special kind of Soul (roughly comparable with the zealous analogies between Viennese Song and Blues) is continued throughout their recently released fourth album “Yes We Does!”. On the new album 5/8erl in Ehr’n responds to the simple question “How do you do?” with a mischievous and disarming “Yes we does!” and manages to create a beautifully disturbing reflection of themselves, the world and Austria, the country they call home.

Austria as a condition can leave you with a lot to think about, but at the same time can still be easy-going and exhilarating when it snuggles up to your ears: “Many will enthusiastically jump around their living rooms, even though the talk is about homophobia, contamination, Lipizzaner horses and shallow celebrities”, it says in the program notes of the band’s last tour.

In a live setting 5/8erl in Ehr’n do not want to present themselves with a showcase concert. They prefer to have a common experience with the audience and ask their listeners to: “Sigh and moan collectively. Experience communal hate that will make you a better person, and please – yes, please! – laugh at the two singers. Their dialogues between the songs – foreplays that you will never forget – are reminiscent of legendary duos on the Hollywood screen.”

It goes without saying that the musical style of 5/8erl in Ehr’n sometimes takes a zig-zag course. Obviously this band is very entertaining, but there is more to this band than meets the eye and the ear:

“With all this fun, you are almost in danger of overlooking the musical quality of this quintet. Hanibal Scheutz virtuosically plucks the double bass, while Clemens Wenger magnificently transforms the accordion into a rhythm instrument, which beats are vivaciously supported by Miki Liebermann on the guitar. The vocals of Slivovsky and Gaier travel right through the ears, into the blood, and into the heart of the listener.” (Süddeutsche Zeitung)