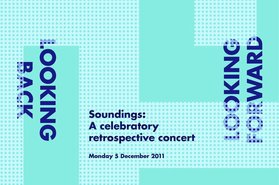 This year Soundings is celebrating its 8th anniversary with some of the most notable composers and musicians who were a part of this unique platform for contemporary music in the course of its history. Initiated in 2004 by the Austrian Cultural Forum London, the Soundings series presents and portrays young composers and artists from Great Britain and Austria in various symposia, workshops and performances and has become a benchmark in the London event calender. In recent years, Soundings has repeatedly drawn a lot of exciting artistic collaborations and projects, many of which continue today.

The series was broadcasted several times on BBC Radio 3, and during a performance in Vienna also broadcasted on television by the Austrian Broadcasting Corporation. Besides broadcastings, Soundings has also made guest appearances in Venice and Bayreuth.

The unique concept of Soundings unites composers and musicians from two very different stories of artistic backgrounds and creative spheres. On the one hand, Austria, with its rich musical heritage and the diverse classical traditions of the Second Viennese School, which has forever changed the further development of music, in contrast to the British artists with their innovative and creative interpretation of the contemporary music scene.

This year’s program will feature compositions by Ed Bennett, Joe Cutler, David Fennessy, Robert Fokkens, Emily Howard and Claudia Moltior from the UK, as well as compositions of the Austrian composers Reinhard Fuchs, Elisabeth Harnik, Gerhard Krammer, Johannes Maria Staud and Joanna Wozny. All of these composers have been awarded with prestigious awards and are among the most performed and most celebrated composers of their generation. Both Emily Howard and Joe Cutler are 2 of only 20 composers who have been selected to create a 12-minute composition for the Cultural Olympiad 2012.

This unique opportunity offered to artists by Soundings result in outstanding performances of new compositions, discussion and innovation, due to weeks of strong and intensive collaboration and exchange.

The concert will feature selected works from the past 8 years and will take place on Monday, the 5th of December 2011 at Kings Place, Hall Two, 90 York Way, London.