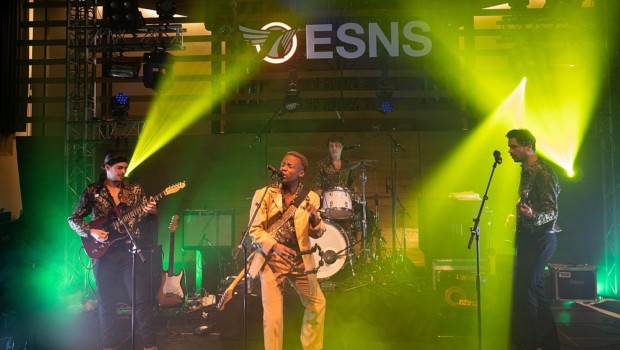 If you want to know which up-and-coming musicians not to miss out on in 2019, you have to travel to the north of the Netherlands, to Groningen, at the beginning of the year, to the Eurosonic Noorderslag Festival. This is where the “who’s who” of the European pop world meets. At Eurosonic 2019, taking place from 16 to 19 January, one could discover hot new bands for the 33rd time. With a total of nine acts, Austria was represented by more acts than ever, showcasing 5K HD, AT PAVILLON, AVEC, DORIAN CONCEPT, MAVI PHOENIX, MOLLY, NAKED CAMEO, PETROL GIRLS, and THORSTEINN EINARSSON. Proof that the upward trend and the density of promising acts in this country is now also recognised abroad.

What does Europe sound like? A look back at ESNS 2019

There were some innovations at the festival this year. The conference, which is an integral part of ESNS, focused on diversity and sustainability. Over 4,000 industry representatives and music professionals from 44 countries attended the festival. A total of 342 acts could be heard in 42 locations, this time with a focus on Slovakia and the Czech Republic.
From an Austrian perspective, Eurosonic 2019 was a success from the very beginning. At the Music Moves Europe Talent Awards, which replaced the EBBA Awards, two local acts were among the 12 winners. AVEC (in the category Singer/Songwriter) and STELARTRONIC (in the categories Electronic Music as well as Public Choice Award) were awarded the coveted trophies. AVEC received the award during the show and was impressed by the atmosphere: “It was wonderful to be at Eurosonic, the moment we got the award is one I will never forget. For me, ESNS 2019 is an exchange of great new music and a discovery of wonderful, talented artists and musicians”.

45 MINUTES THAT HAVE TO BE PERFECT

On the first evening the Tyrolean band MOLLY played at the renowned club Vera. MOLLY tells us about the moment in retrospect, “…just before we went on stage. You drive so many kilometres, rehearse for so many hours, invest so much money and it is distilled down to 45 minutes that have to be perfect. You get nervous, but after the first song we were fully into it.”

It was exactly this moment, the band in anticipation of their performance, that was also remembered by Bernadette Karner, their manager. “As well as looking for familiar faces, such as media representatives, national and international promoters, in the audience and the positive feedback in the following days during a festival that was anything but short of good bands,” she adds: “For me, Eurosonic 2019 means the achievement of an intermediate goal. MOLLY were able to prove their strengths under the best possible conditions at an important time, shortly before the release of their debut album. It was possible for the professional audience to form a unbiased opinion without any restrictions”.

For the Austrian industry representatives, the second festival day started at the Austrian Networking Lunch, organized by Austrian Music Export and Factory 92. There, many took the opportunity to make new contacts and to meet and talk to promoters, festivals and booking agents from all over Europe in a relaxed atmosphere.

In the evening all artists from Austria were busy on the stages of Eurosonic Noorderslag. Thorsteinn Einarsson performed in the Doopsgezinde Kirk, a church. Thorsteinn Einarsson describes his favorite moment of the performance: “Right at the end when the outro of “Swingset” was built up. The mood became better and “bigger” the more the outro built up and at some point all hands were up, everyone clapped along and we all lived and shared this “moment” in this church. That was very special.”

The gig of Mavi Phoenix on one of the main stages of the festival, the Grand Theatre, was mentioned again and again as a “must see”. The hype was also obvious by the likes und comments on the festival app. Needless to say, the venue was well filled when Mavi Phoenix entered the stage and gave a convincing performance. She proved that she is definitely an artist to watch in 2019.

A little later Naked Cameo stood on stage in the Barn. The band, whose sound oscillates between electronica, pop and R&B, including organic beats and extended synths, also performed at Reeperbahn Festival in Hamburg in autumn.

At Pavillon‘s main goal in Groningen was to establish connections to neighbouring countries at ESNS. Their gig – and recent debut album – certainly helped this idea. The band was able to convince the audience and received positive feedback by locals and attending industry delegates alike. And what exactly does the other side of the stage, the audience, look like? Zock, the drummer of the Petrol Girls explains: “Eurosonic 2019 was a good opportunity for us to play in front of an almost unfamiliar audience, which is a rare and exciting challenge, especially for our singer Ren. Within our scene, concert goers are used to hearing political announcements between songs, which seems rather unusual at a showcase festival“.
The designated artist village was also a nice addition for the band: “After a stressful day of travelling we found the extremely generous artist area including artist boats. We are normally quite rarely spoiled with such pleasant conditions. The Poolcentrum as a venue was also a pleasant surprise – it was definitely the perfect size and atmosphere for our show”.

In the Groninger Forum, a location normally used as a cinema, 5K HD had a huge stage for their show. The top-class ensemble, consisting of the renowned musicians of the Austrian band Kompost 3, Martin Eberle (wind), Benny Omerzell (Keys), Manu Mayr (bass) and Lukas König (drums) as well as the singer Mira Lu Kovacs from Schmieds Puls, gave a terrific performance in the well-filled venue where some international festival bookers had gathered.

The very last gig with Austrian participation was held by Dorian Concept. Performing alone, he made the Simplon’s floor shake and the visitors bounce with his virtuoso skills on microKORG. Even the spectators in the back rows of the Simplon were able to follow the dexterity and the unique use of the microKORG via the sophisticated live visuals.

Now we excitedly wait to see what the gigs at ESNS 2019 will bring to the acts that performed this year – and we also have an insiders´ tip: The festival regularly publishes ETEP results, lists about bookings and radio airplays of the bands that are represented at the respective editions of the festival. With their appearances at Eurosonic 2019, the bands from Austria have definitely put themselves on display in a highly professional manner at one of Europe’s biggest showcase festivals.