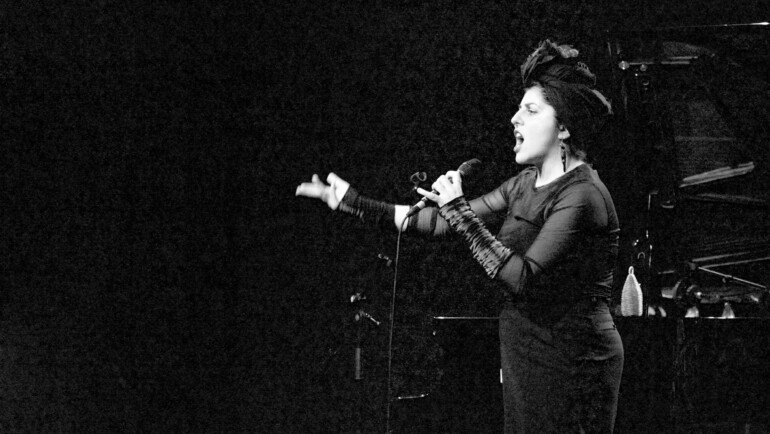 At the beginning of December 2018 the third edition of the KICK JAZZ festival took place in the renowned jazz club Porgy & Bess. On two evenings, young local musicians were not only offered a stage with international appeal as a venue, but also given the rare opportunity to play for an international audience. More than 20 festival promoter from all over Europe accepted the invitation of Austrian Music Export to discover Austrian Jazz & World Music for themselves – and perhaps to book them for their festival at home.

What does it take to be recognised on the international market as an Austrian jazz band? “It’s not enough to be very good,” says Helge Hinteregger in an honest and perhaps sobering statement. Local musicians also need opportunities to get in touch with international festival organisers, to be seen and heard by them. With Kick Jazz, mica – music austria and the Austrian Music Fund, which have launched the joint export initiative “Austrian Music Export”, have been offering local jazz musicians a festival with a strong international focus since 2015. In just three years, Kick Jazz has made an excellent name for itself. In 2018 more than 20 international festival organisers, curators and bookers from 15 European countries accepted the invitation to join one of the few domestic showcase festivals for jazz and world music.

Time to listen, time to work

Helge Hinteregger explains: “The special thing about Kick Jazz are the live concerts. Our guests get a filtered selection, they can enjoy the concerts and don’t have to choose between 40 different bands and parallel programmed concerts“. And isn’t that something music needs? Time. Time to listen, time to work. And a little atmosphere. From the very beginning, Porgy & Bess, which celebrated its 25th anniversary in 2018, was an important partner here as host. Without the renowned jazz club as a strong partner, a festival of this size and quality would not be possible.

The first evening of Kick Jazz was dedicated to world music. The evening was opened by the Trio Infernal, a group organised around the accordionist Christian Bakanic which had dedicated itself to the conquest of jazz and folklore. Golnar & Mahan followed after a short break. The expressive voice of Golnar Shahyar, which was virtuously accompanied by Mahan Mirarab and Amir Wahba, captivated the audience. The novel Britschgi Quintett also proved to have a strong stage presence, not least because they are humorous masters of interaction with the audience.

The second evening moved along the boundaries of jazz. It went from the experimental jazz of the Synesthetic Quartet, to the roots of contemporary music of the formation KVIN and which surprised with original compositions by Philipp Kienberger. The instruments of the two strings Matthias Bartolomey (cello) and Klemens Bittmann (violin, bass) are a little more considered to be classical instruments, but what BartolomeyBittmann do on stage is almost like a rock concert in terms of energy.

A window to internationality

“I find Kick Jazz extremely important for Austrian musicians, it is nothing less than a window to internationality,” says Mario Steidl (International Jazz Festival Saalfelden). Steidl, whose festival celebrates its 40th anniversary this year and who established it as THE hot spot of the international jazz scene, is also among the invited festival organizers and a long-standing collaborator. “Both festivals present Austrian artists, both are a meeting place for promoters. And both of them are concerned with positioning Austrian artists internationally”.

The business that should be started with these evenings can be imagined as a domino-effect. With the invitation of international promoters to Kick Jazz, gigs at their festivals abroad become possible, many of the performing bands are invited to other festivals all over Europe. We are excited about what 2019 will bring.