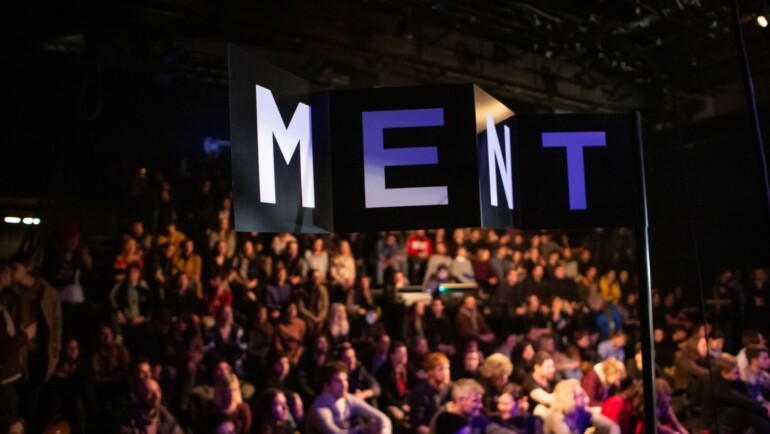 MENT LJUBLJANA has made a name for itself within the European music industry since its foundation in 2015. The three-day showcase festival represents a link to the global music world for bands from Eastern and Central Europe in particular. A handful of selected acts from Austria have been featured in the line-up every year since its inception. In 2019 MICKEY, SCHMIEDS PULS, TENTS and JEROBEAM FENDERSON & HANSI3D were on the programme of the Slovenian festival. AUSTRIAN MUSIC EXPORT and WAVES VIENNA hosted a well-attended “Austrian Heartbeats Reception”.

Every year MENT Ljubljana attracts local music lovers and international music professionals. During the day, MENT Ljubljana offers conference participants a varied programme of lectures, discussions and workshops. In this year’s edition the Austrian bands Mickey, Schmieds Puls and Tents could prove their live qualities on the different stages of MENT Ljubljana.

The electro-acoustic musicians and video artists Jerobeam Fenderson & Hansi3D presented their work in a darkened cinema auditorium. The duo surfed the retro wave with “Oscilloscope Music”. In the crowded cinema Jerobeam Fenderson & Hansi3D conjured luminous shapes, points and curves on the screen, which were controlled by sound. The audience was able to follow the direct relationship between light beam and sound live.

Tents played a dynamic concert in the Orto Bar and delivered a compact showcase with exactly 40 minutes of stage show. With “Sabbatical” as opener, Tents had full stage presence from the first second on and gave it their all. Tents are now experienced professionals. That’s exactly what is expected of a band that wants to succeed internationally.

The later hours were even wilder with Mickey‘s show. With their art pop project, the two former members of Gin Ga, Alex Konrad and Klemens Wihlidal, earned themselves a name that stands for fat old school beats, playful effects and clever lyrics. At live concerts, a cheerful portion of madness flashes through Mickey’s “survival pop”. Konrad and Wihlidal gleefully cross boundaries live – and this energetic enthusiasm is definitely contagious.

Mira Lu Kovacs was on familiar ground with her band Schmieds Puls, as she first played MENT Ljubljana in 2018 with 5K HD. She seemed to be happy to be back in Ljubljana. The busy singer, who possesses a true gift with her voice, proves with Schmieds Puls that she has a knack for choosing her co-musicians and band members. The role that Lukas König plays in 5K HD is taken over by Christian Grobauer (drums) in Schmieds Puls.

During the warm atmosphere of the concert given by the trio Schmieds Puls in the large hall of the former Stara Mestna Elektrana power station, Kovacs joked with the audience. The short stories, which the concise song titles can evoke in the spectators’ minds, provided enough reason for this. Kovacs always lets personal things shine through. “Superior (Fuck you)” and “Don’t Love Me Like That” from the current, third album “Manic Acid Love” were on the programme as well as “Play Dead”, a favourite from Schmieds Puls’ very first album. Let’s hope that Schmieds Puls and 5K HD will not have to compete for their singer someday.

Afterwards Austrian Music Export and Waves Vienna hosted a well-attended “Austrian Heartbeats Reception”. The international guests could get to know each other in a nice atmosphere, deepen their conversations and make new contacts for the future. All in all, Austrian labels, organisers and festivals were well represented. We are looking forward to seeing you again at MENT Ljubljana 2020!