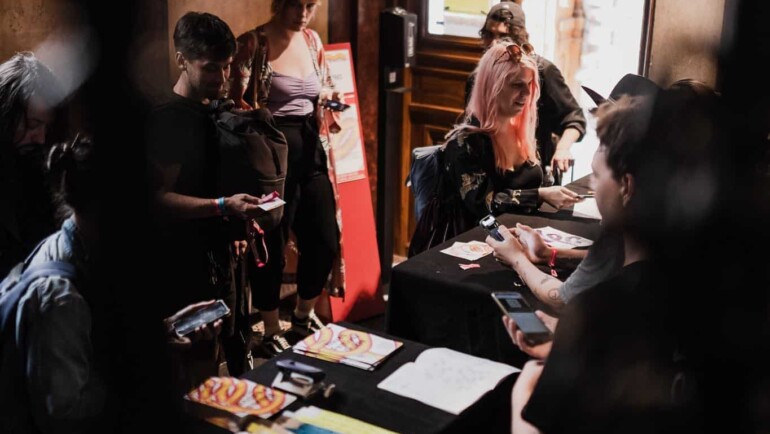 Climate change is no longer deniable. The summer of 2022 was one of the warmest and driest on record. It is high time to take this development seriously and to tackle the internationally agreed upon measures to achieve the climate goals with vigor. What can the music industry do in this context? What ideas does it have, and what has already been done, in concrete terms? What do possible sustainable strategies for the industry look like? These questions were explored at the WAVES VIENNA CONFERENCE Panel “No Music on a Dead Planet”.

Fay Milton, musician, producer and co-founder of Music Declares Emergency in Switzerland, begins the panel with a look into her personal past, and when it became clear to her that something had to be done about climate protection and sustainability. She admits that it was a long process for her as well until she became aware of the issue. At 19, she worked for BMW for a summer as an IT intern. One day, she asked her supervisor whether BMW was already producing electric cars, to which she was told that they had already developed the technology but were not yet installing it because their competitors were not doing so either. They wanted to wait. This statement shocked her. Over time, however, the topic receded into the background until, many years later, she, as a musician, met activists who encouraged her to bring Music Declares Emergency to life in Switzerland – which she did, with others.

In Austria, Music Declares Emergency, started in April 2022, can be traced back to the commitment of Las Vegas Records boss Andreas Jantsch, who, after Fay Milton’s introductory words, described his motivation for founding the initiative in Austria. A friend of his, who works for the WWF and had already heard about other Music Declares Emergency initiatives in Europe, asked him why nothing was being done to this capacity in Austria; whereupon he asked himself the same, and decided to look for partners with whom he could also run the initiative here in Austria. The goal of Music Declares Emergency in this country is to influence the music industry, to make suggestions and to implement projects. Artists, labels, in fact, the entire industry, should take on pioneering roles. And this should happen through a positive voluntary approach, without prohibitions.

Artists, labels, in fact, the entire industry, should take on pioneering roles.

The moderator of the panel, Paulina Paranov, asks why the topic of environmental protection and sustainability has only belatedly become one of the music industry, although it has been discussed everywhere for a long time. Fay Milton replies that this question should actually be put to the audience present, after all, she does not represent the entire music industry. In the course of preparing for the panel, however, she did some research and discovered that the last Waves Vienna panel on this topic took place in 2014. When she started with Music Declares Emergency in Switzerland, she did a lot of research and found a significant well of interesting ideas and projects, but very few of them were implemented in the music industry – and that bothers her.

Paulina Paranov wants to know from Sohail Arora, the founder of the Echoes of Earth festival in Bangalore, India, which is also considered to be the greenest festival in his country, what awareness of environmental and climate issues is like in his home country and how he, himself, as an organizer, deals with this issue. India, he says, is definitely still ten to fifteen years behind Europe in terms of awareness of the issue. But nevertheless, slowly but surely, something is moving in India as well. With his festival, he is definitely trying to make a contribution to raising awareness.

There aren’t necessarily “big” measures being implemented, but many small ones which add up to a lot […]

The idea is to show that even a large-scale festival – Echoes of Earth has 25,000 visitors – can be held in a sustainable manner. Among other things, all stages are made of recycled materials, scrap metal and other junk. About 80 percent of the entire festival uses these materials. In addition, Echoes of Earth is also a completely plastic-free festival. For example, cups and bottles are made exclusively from recyclable materials. They also offer workshops on the topic. There aren’t necessarily any “big” measures being implemented, but many small ones which add up to a lot, and become more and more each year. The festival pursues the goal of constantly improving.
It invites acts from all over the world, but at the same time it has started to cooperate mainly with partners and organizations that help to reduce the festival’s carbon footprint by reducing the number of artists who travel by plane.

Ways to reduce the carbon footprint

According to Paulina Paranov, traveling – and musicians and audiences do a lot of it – emits a lot of emissions and leaves a significant carbon footprint. She wants to know from Andreas Jantsch what answers Music Declares Emergency has to the question, especially regarding audience travel. There are no simple answers here, says Jantsch, but this is where politics has a greater role to play. The main issue is to make travel by public transport more affordable – perhaps through subsidies. He can also imagine that one can perhaps travel cheaper or even for free with a purchased festival ticket. But also on the role of the musicians could start with tour organization and promoters. You can ask yourself: If I produce, tour, etc. in a climate-friendly way, am I not also entitled to a higher subsidy?

Questioned by Paulina Paranov, if she already practices the idea of climate-friendly touring, Fay Milton says that she has already completed an entire concert tour with Deutsche Bahn (German train system). And that was really easier than one might have imagined beforehand. But she adds that it’s a little easier for electronic musicians because they can carry their equipment in a small suitcase. Bands, of course, have a harder time with that. A drummer won’t be able to carry his instrument back and forth so easily by train. Touring by train is admittedly not the cheapest option, but you have to look at the other advantages. For example, you don’t have to rent a bus, including the driver’s fee. In addition, the trips, themselves, are much more relaxed. Overall, she has had a good experience so far.

Fay Milton wants her actions to motivate others to do the same. She is not only interested in minimizing her own carbon footprint, but also in setting an example and persuading others to do the same. Such role models play a special role. One is a cultural influencer through one’s own actions, and this is an asset that should be used. For example, artists could convey that traveling by train is ‘cool’. Another point is that it would be helpful if organizers could perhaps provide part of the backline, which some already do, to some extent. It would be nice if this could happen voluntarily, or as a rule.

This is what the Echoes of Earth festival, among others, does, as Sohail Arora continues. The challenge he faces, however, is that international artists have to travel from very far away. That’s where you have to fly people in, you can’t change that. What you do, however, is that you let local artists, especially local newcomers, travel by train. And that’s despite the fact that India is a very large country.

For Andreas Jantsch in this context, it is interesting that, for example, many jazz clubs have long provided a standard backline that can be used by everyone. In contrast, this is not the case with many indie clubs. Why it doesn’t happen in the indie sector in particular, he can’t say. But you can see from the example of jazz clubs that there would be potential.

Las Vegas Records, Andreas Jantsch’s label, also provides tour buses for bands, says Paulina Paranov. Unfortunately, a tour bus is sometimes the only way to manage concert tours, says Jantsch. But at least it is more climate-friendly and sustainable than traveling with several cars or minibuses. But as much as possible, alternative travel options are of course preferred. Jantsch adds that it is also a question of cost, because traveling by car is often simply cheaper.

Would artists, if they had more money available for a tour, possibly through funding, be more willing to resort to sustainable and thus somewhat more expensive travel options, Paulina Paranov wants to know. Fay Milton doubts that. The financial framework of many artists is simply tight, and if suddenly more money were available, it would not be saved, but spent immediately. One would perhaps have to find other incentives.

Sustainability also plays a role in merchandise production. Paulina Paranov wants to know how the three panel guests deal with this issue. For Sohail Arora, the question of the sustainable production of merchandise articles still plays a subordinate role, since festivals are financed 60 to 70 percent by brands, and advertising through merchandise, in reality, makes up a very small share. The main focus is on travel and the sustainable running of the festival.

Sponsors have a huge influence and could exert their power it if they wanted to.

Fay Milton responds to Sohail Arora’s statement that the festival is largely financed by brands. Sponsors have a huge influence and could exert their power it if they wanted to. She said she was very upset when she visited a festival and saw that a large beer producer was still handing out plastic cups to the audience. Surely, such large companies could afford to offer alternatives.