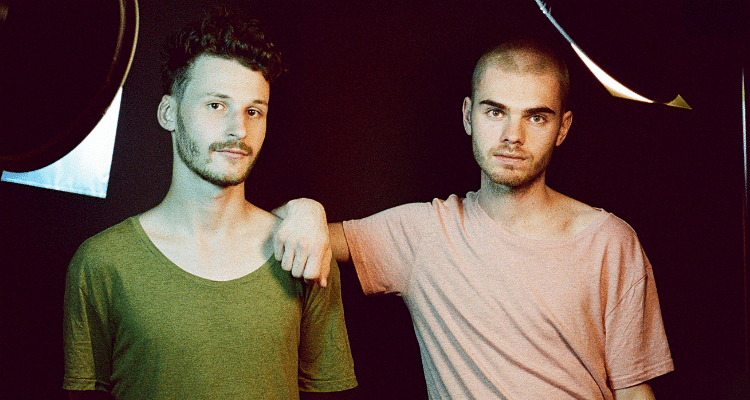 TOBIAS KOETT and MARCO KLEEBAUER released their ANT ANTIC debut “Wealth” (Seayou Records) in June, 2017. Their sound, an enthralling mix of synths, beats, and a charismatic voice, is the embodiment of the sound of our times. In September, Ant Antic will perform at Reeperbahn Festival and Waves Vienna. Sebastian Götzendorfer spoke with Tobias Koett in a WHATSAPP chat about the Zeitgeist, autodidacts, and wealth.

How satisfied are you with the new album?

Tobias Koett: I don’t think we would have released it if we weren’t super satisfied with it or couldn’t stand behind it. We spent a lot of time on it.

You can hear that you spent a lot of time on it. The extent of the professionalism, both the sound and the songwriting, is impressive. You were also the producer and played a sort of double role on the album, what effect did that have?

Tobias Koett: I think that is one of the advantages that Marco and I have. That we keep the album in our hands all the way through to mastering. That means we don’t just have complete control over the arrangements and songwriting, but we also have 100% control over the production and mixing, which allows us a certain creative freedom. It was also a year of trying and learning.

THERE ARE EVENINGS […], IN WHICH WE JUST TALK ABOUT ABLETON.

As far as I know, Marco Kleebauer enjoyed a comprehensive musical education in Linz. What about you? Are you, especially in the area of producing, an autodidact?

Tobias Koett: Producing is a learning process for both of us, in which we try something, fail, try again, do it better, and then talk about it. There are evenings, especially together with Max Walch (from Monophobe) in which we just talk about Ableton. Those are good nights, if not the most sociable. I have also had a classical music education. But the instruments and tools that I am now using to make music don’t have much to do with that.

All musicians probably know nights like that. But it sounds like a good working dynamic and atmosphere. Can you explain a little more closely how it works with you two? Marco lives in Vienna and you live in Berlin.

Tobias Koett: It’s usually always the same. One of us produces a rough idea that we then either work on together or let the other develop further. The last 50% is then usually worked on together in the same room. That is still the same despite the distance. Of course there are certain tracks that come primarily from Marco’s, or primarily from my pen. Once the track is done it’s my job to add the vocals. I usually know from the very beginning what I want to do with the vocals already, and plan it into the production.

That sounds like a well balanced working style. Since you mentioned vocals: they are responsible for a large part of your sound. In my review of your album I wrote, “A voice that is melancholic enough to get the broody types on board, but also manly enough to provide a certain sex-appeal for a female audience.” Can you do anything with that?

Tobias Koett: I had to smile when I read that. I think, as long as the voice and the lyrics are able to express an emotion and aren’t meaningless, you at least haven’t done anything wrong.

I meant it as a compliment. Right now my favourite song on the album is playing. “Histamine”. I think the melodies are really well developed. What can you tell me about that? Or do you, as a composer, have any personal favourites?

Tobias Koett: “Histamine” is super. It was also the second track we made together. That song is really relaxing.

It’s also an excellent closer for the album.

Tobias Koett: One of my favourites is “Take”. That arrangement really stands out on the album and is one of the songs that we composed together in the same room, from beginning to end. I like “Juggernaut” too, because I have always wanted to make a club track with a post-rock arrangement. “4 Pole” is one of my favourites, because it is polarising. I think music could easily be more polarising.

I was a little surprised to see you write “post-rock arrangement”. What do you mean?

Tobias Koett: Not so much the structure but the use of the chords on top of a longer or uneven rhythm sequence. It’s not really anything new because almost every Mogwai song is like that. You don’t hear it that often in electronic music. But it shouldn’t be obvious to the lister while listening to it either.

Interesting. Mogwai as an inspiration for Ant Antic?

Tobias Koett: I have to admit I am a pretty big fan.

EXPAND OR BREAK THE BOUNDARIES OF POP.

It’s interesting to find out just which influences can show up in electronic music. In my review I also wrote that the band’s sound, that danceable electro-pop, really captures the current zeitgeist.

Tobias Koett: I find that the interesting thing about electronic music is that you can bring a very non-mainstream sound-design into a radio friendly structure and use that to expand or break the boundaries of pop. But we wilfully create music from and for 2017. There are enough bands and musicians that want to sound like the 80’s, both in synth- and Austro-pop.

Your sound is definitely modern, and it looks like everything is working according to plan. Similar to Leyya, Marco’s second band. Are you a fan?

Tobias Koett: A huge fan! We are all really close and excited about what is happening with both projects.

It’s wonderful when you can all be supportive of each other. And congratulations on the success and resulting good fortune. Reminds me a little of your track “Wealth”. What does wealth mean to you?

Tobias Koett: Wealth is a huge word that can mean both everything and nothing. Our parents had a different definition of wealth than we did. Wealth doesn’t have to be connected with money or happiness. And as a topic for a very melancholic and self-critical album, the word has an almost ironic effect.

What are your plans now that the album has been published?

Tobias Koett: Playing a lot of concerts. We will be playing a lot in Europe starting in September. And I am enjoying having my head free for new songs. I have the feeling the second album won’t take too long.