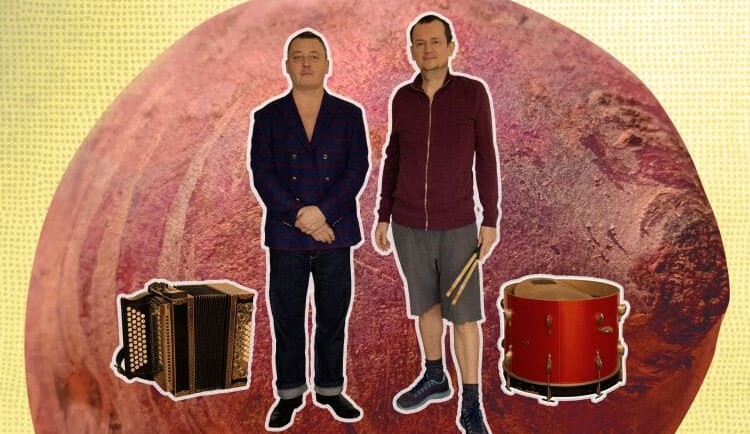 Recently HANS-PETER FALKNER and MARKUS BINDER of ATTWENGER released “Drum”, their first album in 6 years. Between “Spot” and “Drum”, a release tour and readings took place, as MARKUS BINDER had published the book, “Teilzeitrevue” in 2017  (Verbrecher-Verlag, Berlin). Jürgen Plank talked to MARKUS BINDER about political content and songwriting tricks for ATTWENGER lyrics.

When did the work on the current album begin?

Markus Binder: In June 2018 it started with the songs for the new album, with the song “Leider” (“Unfortunately”), which needed to be done most urgently. We have been working on the album since summer 2018, in parallel with the concerts. The mixing of the album was done last summer and all the graphic work as well.

You mentioned the song “Leider”, what kind of urgency did it have? Why did this song have to happen?

Markus Binder: It’s the most political song on the album. Since we always were a band that articulated itself politically, the time was ripe again for me to make a decidedly political song. In other words, to make a current assessment of the political situation. How I’m seeing the situation. And it actually strikes me that I have been talking about a right-wing tendency in society since the beginnings of Attwenger, for about 30 years now. This right-wing tendency always manifests itself in different shapes, in different terms. I was interested again to articulate the current situation, keeping a focus on: How does that sound like? Because I believe that a political song should not sound like a political song. It already has been written about us that one can also dance to our political songs. I think that’s very well understood, that’s the point. There’s always the question, how can I get serious socio-political content across in a groovy way.

How do you think that can be done?

Markus Binder: It’s important that there’s always humour and „gfeanztheit“ [note: means something like cunning]. The song “Leider” is special, it stands out quite a bit on the album because there’s a very reduced and roughly one hundred year old sample in there. It’s a three- to four-part choir, from the 1920s, from the U.S.A., the choir only sings “Mhm,” “Mhm,” but in a blues format. I liked that: To put a melody on top of such a reduced sound, and lyrics that are constantly condensing themselves.

You’ve already touched on the socio-political aspects, for example in the song “Leider”. I noticed that economy, business and money are the recurring themes. One song is called “Happinessbisness” and there’s even a word like stocks, which is very rare to find in a lyric. Why were these economic aspects issues for you?

Markus Binder: What you’re talking about is symptomatic of a social situation in which the principle of performance is placed above everything. That means that the social question, the question of solidarity, cooperation, and global solidarity are also being discussed. But I think the business aspect has obviously come to the fore. That’s why it comes up again and again, and  individual aspects of this issue are addressed on the album. In the song “A weng weniger” the competition society, the performance society are being addressed. Consideration being not really important, the social question is pushed back further and further. Precarious jobs are on the rise. You can hardly hear anything about how society is dealing with increasing automation. Not all the jobs that are eliminated by automation can be replaced by the creation of other jobs. There are social upheavals underway, and social issues are being strongly raised. But you don’t hear much about that, unfortunately, which is why the song is called “Leider”.

THIS RECORD IS A PLEA FOR RELAXATION AND RETHINKING

On the other side of the meritocracy are the songs “Kredit” and “Schuidn”. Are they related to the current Corona crisis which is also an economic crisis?

Markus Binder: Well, you’re hearing all the time that a lot is being bought on credit. So, buying is important and owning is important, and somehow the credit will be paid back. Credit also refers to our planet: that the last resources are being exploited although everything is already collapsing, and the sea level and the temperature is rising. Nevertheless, one has the impression that we are heading for the wall at full speed. “Schuidn” ends with the proposal to cancel all debts. These are allegorical stories that I’m telling. The Greek crisis comes to mind, Greece was put under massive pressure, also by Germany, with evergrowing credits and interest rates, and as a result Greece suddenly had so many debts. My point is to say: Let it be with your money stress and your performance stress. We’re already living in a burn-out society in which everybody is already on the brink, because this performance principle is only exhausting people and the Me-Businesses are all buckling anyway. This record is a plea for relaxation and rethinking.

If one reads the song titles in sequence, some new contexts arise, for example: “Leider” “Völlig wurscht”. Or: “I mog” “Olle de i kenn”. How did that come about?

Markus Binder: You can always do that with Attwenger’s albums: create contexts out of the titles and make stories. First and foremost, it’s about finding a good title for every single song. That’s not so easy. Secondly, you create the sequence according to aspects of sound and tempo and make sure that there’s a nice variety. Only as a third aspect the question arises whether the sequence of the titles creates a kind of short story.

Concerning the song lyrics, I’ve noticed that you often place the central message or punchline at the end and thus create a surprise with it. Is that a writing trick you like to use?

Markus Binder: That’s a very thoughtful observation. I’ve noticed that I’m doing that in my books, too: a story is going on over one page, and another page, however long, and at the end a sentence comes up that invalidates or turns the whole story round or creates a punch line. I used this principle in my literary work to an even greater extent compared to the Attwenger lyrics. I like it because the context of the whole piece is changed. With that I’m saying: everything is not exactly the same after all. That’s what I meant earlier by „gfeanztheit“. There’s also a certain humour to it, showing that it’s all just a story with a false bottom.

MY PROBLEM IS NOT WRITER’S BLOCK, BUT THE FLOOD

In addition to song lyrics, you are also writing literary texts. Do you have writer’s block and what does your experience with it look like?

Markus Binder: Simply by not writing. [laughs] Since the new album has been released, I’m not thinking at all about writing literature. It just doesn’t work out in my head, but it doesn’t matter. I’m a pleasure writer, so to speak, both regarding Attwenger and my books. If nothing wants to be written, that’s fine too. On the contrary, my problem is that I always have too many lyrics. Same thing with the new record: the last record “Spot” already had quite an amount of lyrics, I thought. And then you also have to learn the lyrics by heart. I actually wanted less lyrics, “A weng weniger”, as the song already says. And what happened? More lyrics than on the last record, exactly one third more. My problem is not writer’s block, but the flood.

How did you set up the new album musically? There’s also quite an amount of electronics and not all the drum parts have actually been recorded in a studio, haven’t they?

Markus Binder: The ratio is about half and half. Out of fifteen tracks, seven of them are done electronically, they’ve never seen a typical recording studio with recording spaces. I just did them on the laptop, of course I have a microphone of a quite good quality, so that the vocals come across well. But overall you can say that half of it was produced purely electronically and for the other half we went into a studio, because of course I can’t record a drum kit in my living room.