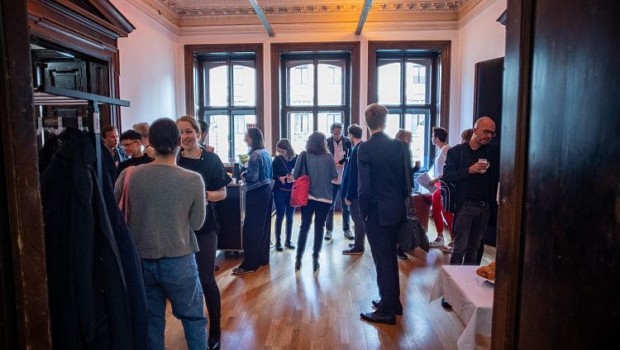 Are world premieres a fetish, where is the audience, how can fair payment be made, how can equality be achieved? The AUSTRIAN MUSIC THEATRE DAY in Vienna looked for answers.

A WELCOME CULTURE FOR MUSIC THEATRE

Not everyone has to love new music. There was an eager nod when a middle-aged gentleman reported what had previously been worked out at a theme table. Outside the WUK the sun was shining and inside the WUK about sixty enthusiastic people stuck their heads together. Even though not everyone has to love new music, people still should to be able to gain experience from it. This received an eager nod. Only how contemporary music theatre can become more accessible, there seemed to be less agreement about that. The opinions were manifold. The audience would be absent from very experimental material, some themes would be too depressing, too far away from society, the attitude too patronising. Advertising and communication, better memes and better contacts, are also avenues to reach people. Others, on the other hand, wanted to go out into public space and improve the descriptions of works in the programmes. Music theatre could inspire in this way. This is how inclusive culture can work.

The Austrian Music Theatre Day 2019 opened early with a keynote by Ulrike Kuner from the Kulturrat. Back in the early nineties, she said, the contemporary piece “Die Soldaten” by Bernd Alois Zimmermann would have been performed at the Vienna State Opera. The conductor would tell the orchestra in rehearsal: “You are the Philharmonic, you must be able to play that.” A lot has changed in the echo chamber of the opera in recent decades. All the talks were worthwhile, said Kuner, today there is a functioning network and trust of decision-makers, plans can be tackled immediately. Together we make a lasting impact.

Afterwards, discussions took place at tables on how contemporary music theatre functions, what production realities look like, how the role of the artist is changing, and what gender equality is all about. Women, it was reported, are hardly to be found in management positions at the big houses, while middle positions are predominantly held by women. In Northern Europe the situation would be better than in the South, young women would have a better environment today. Solutions were also sought. There needed to be discussions about occupations, discussions about who decides according to which criteria, and these had to be conducted at relevant levels, in the large media and with political decision-makers. For a repertoire that also offers women important roles, the Bechdel test from the film industry could be adapted. Works are scanned for a minimum of representation of women. Mandatory transparency of salaries in management positions can also clarify how good or bad the gender pay gap is.

Singers were currently at the bottom, was the complaint at another thematic table, when it comes to fees. If there is little money, musicians are under payed. Sometimes sound engineers wouldn’t be well-payed, dancers earn even less than actors, and there aren’t enough commissions for female composers. In general, creative people would too often be treated like business people. The fact that for a long time there was no money at all outside the established houses in Ukraine, but only sheer enthusiasm for a cause, was no consolation for those present.

In the afternoon, four people with very different perspectives discussed how productions and cooperations work. Among the panelists, Hermann Schneider is the director of the Landestheater Linz and controls the largest steamboat. There are 800 employees, 40 new productions and a total of 900 performances per season on five stages. Musicals such as “Sister Act” and “Les Miserables” will be profitable productions. This creates financial security, so that Heiner Müller’s production of “Tristan und Isolde”, for example, can be elaborately reconstructed. The rights of use are in Bayreuth, which is why a co-production was necessary here alone. Another production will be supported by the EU this year. Apart from Linz, Modena and the Serbian Novi Sad are also involved, producing parts in parallel. And “Medea”, as a co-production with Opera de Nice, saved considerable costs for costumes and stage design.

Hermann Schneider said that this marketplace was used for dealing, supply and demand. And while large institutions and the EU may have a lot of money, it is still incredibly complicated to get it. In Linz, people are hired to do this, but small houses can hardly do it. And that is not fair. Therefore, knowledge about funding and networks in the universities as well as cultural and music management should be taught. Co-productions in Linz would have to close a gap in their own offerings and, of course, fill places. Hermann Schneider has to raise a paltry 10 million euros a year.

The approach of Airan Berg from the Festival of Regions is different there. He puts the same energy into every production, whether it is played three or three hundred times. In many cases, this needs the right partners, namely those who suit the content and understand the vision. Over the years, with experience, one feels and ultimately decides with one’s gut. Residencies help the festival to be better anchored on site. Laura Artoni (proscena Milan), on the other hand, works all by herself, but she needs networks and cooperations. When a project goes on tour, it takes on a life of its own.

Guy Coolen from Rotterdam brought in the perspective of a middle house. Many productions wouldn’t even work outside the Netherlands, he said, as a producer he must first believe in artists, then in the project. If they want to work internationally, he shows them how it can work. He sees himself as a link to larger houses. He likes to forego premieres and takes pieces gratefully when they come to him ready to go. One problem, however, is that exclusivity is often demanded, usually for a whole country for a whole year. Airan Berg got involved with this. It has happened to him that big festivals no longer invite groups, even if they guest with another piece in Austria. He believes that the audience doesn’t care at all about such vanities, instead it just want to see good theatre.

In the end, Hermann Schneider added a pinch of fatalism. People die. Opera houses will disappear. After all, today we virtually only perform dead composers, there are hardly any living ones that are performed more than once, and you will never hear from the others again. So he doesn’t want to cry. And instead he may even come back next year.