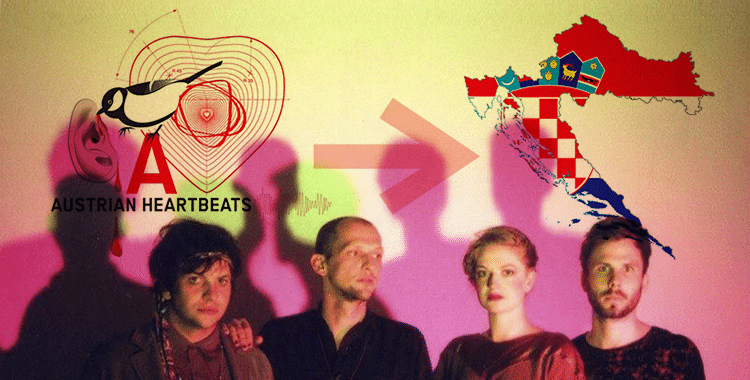 DUST COVERED CARPET is a Vienna-based downer-wave band revolving around songwriter Volker Buchgraber. On their recently released 4th album, ”Pale Noise“, the four multi-instrumentalists have created a reduced and mature sound, with a mixture of chamber-rock and synth-wave elements that are characterized by an almost equal interplay of voices and instruments. The new album documents an evolution and marks the quartet’s inner conflict between the satisfying experience of creating enchanting pop moments and the nerdy passion for weird noise experiments.

The musical roots of DUST COVERED CARPET lie in multi-instrumental folk pop, which has for many years become synonymous with the U.S. label Saddle Creek and its artists. Brass instruments, cellos, choirs and fragile percussion complement the melancholic melodies of singer and songwriter Volker Buchgraber. On “Pale Noise” the band seems to have taken two directions. “Linnahall” and “Grey Formations” are well crafted and solid indie hits – with a driving beat and engaging wave synthesizer instruments. “With this song I was thinking about straight forward synth anthems that have these videos in which the protagonists go on wacky adventures in front of a green screen,” Volker explains about the song “Grey Formations”. The minimalistically instrumented song “Polar Romantic” is quite the opposite, with elongated harmonies that suck the listeners in and refuse to let go for 12 minutes.

The 10 songs on “Pale Noise” were created in the northern winter in the Estonian capital Tallin, where Volker had withdrawn himself for a few months to let the creative juices flow. The insomniac walks through the city not only inspired the first sketches and notes for the songs and lyrics, but were also a great source for various field recordings of ambient noises that have had a huge impact on the mood of the album. The lyrics lead us to the core of Volker’s emotional microcosm. Here personal inadequacies are larger than life apocalypses (“Meteor”), the circle of friends full of vulnerable, emotionally wounded (“All Of You”) and every effort only seems to delay the failure.

In summary, one can say that “Pale Noise” is an album that slowly enfolds its melancholic beauty and intensity the more you listen to it. The profound songs keep you guessing and have the perfect guise for your autumn playlists. Highly recommended.