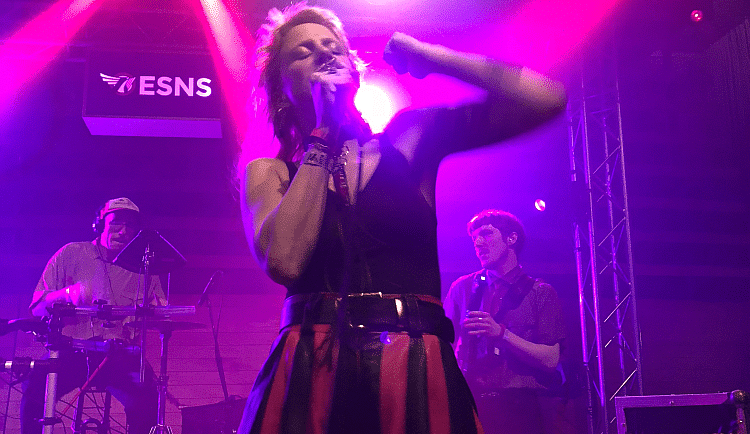 How to blow them away at EUROSONIC FESTIVAL, and how to get the most out of your trip. A report from Europe’s most important platform for the live-music industry.

There are many metaphors for Eurosonic Festival. Casting show, cattle market or a three-day comparison of who has the biggest – list of deals to make of course. Every year in January about fifty people travel to Eurosonic from Austria. The AME office is present, some labels, the public broadcasters, the relevant booking agencies, and of course bands.

This year there were six groups: Ankathie Koi, Avec, Cari Cari, Hearts Hearts, Nihils and Thirsty Eyes. They had to compete with 346 others, among them seven names that were just selected by the BBC as the most promising newcomers of the year. It was surprisingly easy to get into the shows of Sigrid and IAMDDB, while the queues for Nilüfer Yanya or Superorganism stretched around the corner.

Whoever wants to play Eurosonic usually does so for free. The selection is strict: you have to apply, you may not yet be internationally established, and you have to be professional. Eurosonic does not pay a fee, but it provides a hotel room for one night and a little backline. So if you have special technical requests – pyro, laser, bengalos – you have to bring them with you.

The organisation is very good, but with a total of 52 stages it is also a bit chaotic and not too sentimental. The storm-front Friedericke just made things more complicated this year. Flights were cancelled and trains stopped for a few hours, performances were cancelled and rescheduled. But the festival is considered an important springboard that can help musicians lay the foundation for their career. This is why Austrian Music Export helps bands with their travel expenses.

“Ten or fifteen years ago, Eurosonic was actually the place to discover something, everyone was curious. The business has changed, the run-up takes much longer, especially with the big acts we already know what we have in January,” says Hannes Tschürtz of ink Music. He has been coming to Groningen in the northeast of the Netherlands since 2003. For ink Music, Elektro Guzzi and Leyya were the bands that caused the most excitement here. Tschürtz thinks Eurosonic worked out well for them.

Normally it is in the course of the following year that it becomes clear what the performance has achieved for the bands. This year the crowd at Cari Cari was enormous, even people with a special VIP band had to wait to get in. The duo made several appearances in Groningen, including a spontaneous session with an ORF camera team. There is no album yet, they want to build suspense, work on the numbers. “From a band’s point of view, it is becoming increasingly difficult to fill gaps in festival line-ups, and the festival system has changed considerably. It takes a lot of preparation, here we confirm the existing image,” says Hannes Tschürtz.

“On average, we’ve booked about five acts that have played at Eurosonic. At Waves Vienna, on the other hand, the same number of people performed first and then played here,” says festival director Thomas Heher. He is here for the tenth time, plans under 30 meetings at first, but only because Stefan Weinöhrl and Susi Fellner from the team are there and take over a lot. Networks – that is the answer you get from everyone when you talk about why they come here. Most of the time it is bookers and agencies that meet. For Thomas Heher, export agencies are also important as they want to promote bands and musicians from their region. Becoming a focus country at Waves depends on which office wants to bring how many acts to Vienna and how much it is willing to spend. And of course the quality has to be right, which is already clear.

Stefan Baumschlager is in Groningen to introduce the startup Record Bird, a kind of early-warning system for the latest releases that will meet your tastes. Two years ago Record Bird was able to get a six-digit investment, now they need partners. At dinner, the manager of Ankathie Koi tells us again where she sees the musicians strengths, where she could still improve and who could produce the next songs. Meanwhile, Ankathie Koi herself is being interviewed by a Dutch television team. On the way back she played two concerts. ”The most convincing 80’s concert since New Year’s 1990“, the Stuttgarter Zeitung wrote afterwards.

“The show was pretty sick, in a planetarium with huge visuals, the people were lying down, didn’t really look at me. My German booking agency saw me there for the first time. There were talks before, but live is something else,” says Wandl about his performance in 2017. His album “It’s All Good Tho” was the fourth-best last year, behind The xx, Kendrick Lamar and Wanda, according to the German music magazine Musikexpress. Wandl has “… commented on the current state of electronic music, not copied current developments, but extended them.”

You can certainly achieve a lot at Eurosonic. Elektro Guzzi and Sohn took advantage of their opportunity. Their music clearly stood out here, their live shows were incredibly tight, and in preparation they did what they had to to make sure that the right people made it to the concert. More than 400 representatives of different festivals were at Eurosonic and at least as many from the media. It is also easy to go unnoticed.

A lot has happened at Barracuda lately. The biggest live promoter in Austria came under pressure when DEAG and Arcadia tried out new formats and founded new festivals. At Barracuda, old partners broke away and many young people came on board. “They have a lot of expertise, which is noticed, the bookers ask for it, they are very open-minded to building up new acts, there is a good variety of tastes “, says Gerald Hollerer, who does online promotion there. He attended Eurosonic for the second time, and the conference is of particular interest to him. From other showcase festivals one would often come back as informed as one arrived, here the guests have something to contribute. They exchange information about bots that are supposed to answer requests from fans or about how to bypass platforms that buy tickets for popular shows and resell them at higher prices.

Eurosonic has something for everyone. Also musically, be it jazz, electronics, danceable, abstract dancemusic, R’n’B, rock’n’roll with sexy self-destructive singers, neo-grunge, or indie. This year’s programming was based on current trends, there was more metal and more hip hop. Those who really want to discover new music can do so on stages that are within walking distance. And it is not uncommon to discover a band that will later dominate the festival stages in Europe.

In four years time, Eurosonic organisers want 50 percent of the people on all stages and all podiums to be female. People failed to take action for a long time, without a radical act nothing would change. The Keychange initiative is committed to making that change, has met with many festivals, including the Waves festival, which has been putting equal visibility of both sexes into practice for several years.

You don’t hear too much about #metoo. In the field of classical music, there have been some cases where sexual harassment has led to consequences, but this is not the classical area. Machismo is deep in the bones of pop music, there are few women in powerful positions. In Sweden, 2000 women signed an open letter in which they told of numerous attacks and promised not to be silent anymore. Unfortunately, the rest of Europe is not yet ready.

A LOT OF PREPARATION REQUIRED

Going to Eurosonic requires preparation. Just going and hoping to check it all out simply won’t work. The right management, the right agency, the right preparations are decisive for making sure that it pays off to go to Groningen. You have to create networks, expand contacts, but this is one of the best marketplaces in Europe.

Hannes Tschürtz wants to continue coming, even though something is increasingly bothering him. Bookers would have taken a chance on certain acts before, relying on their instincts. But today they play it safe, they rely on figures from Facebook, Youtube, Spotify and radio-rotations. This is a new hurdle, even for quality bands. “You have to keep up, it’s like Austrian football, catching up helps only to a limited extent, the others don’t stop.”

Eurosonic takes place every year in the middle of January in Groningen, Netherlands. This year Ankathie Koi, Avec, Cari Cari, Hearts Hearts, Nihils and Thirsty Eyes played there. If you want to play there, you can do so by submitting your entry to Austrian Music Export. More information about the selection process here.