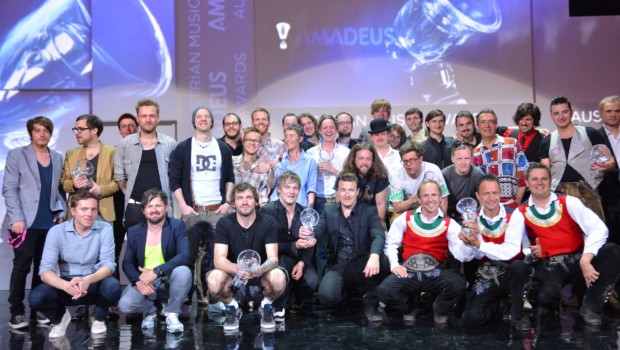 On the 1st of May the Austrian music industry once again celebrated its heroes at the 12th award ceremony of the Amadeus Austrian Music Awards. Chosen by public voting, the coveted trophies were handed to the winners in thirteen categories. The big winners of the evening were Hubert von Goisern, who received two awards, as well as the alpine rocker Andreas Gabalier. The lifetime achievement award went post mortem to the Viennese singer Ludwig Hirsch, who passed away last year.

It was a lavish celebration. Almost everybody with a big name in the Austrian music industry was there to pay their respects to this year’s winners of the  Amadeus Austrian Music Awards. The big winners of the evening were undoubtedly Hubert von Goisern and Andreas Gabalier, who were both called twice on stage to receive the prestigious awards. The third big winners of the evening were the representatives of German-speaking dialect pop, such as Holstuonarmusigbigbandclub (Song of the Year) and 5/8erl in Ehr’n (winner of the category Jazz / World / Blues).