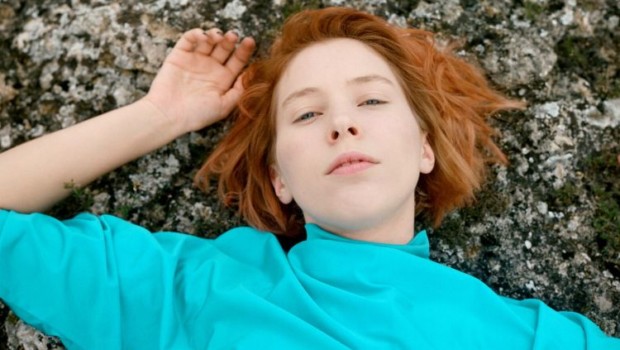 There are cracks in the space-time continuum, there must be, how else is MIRA LU KOVACS supposed to cope with: curating a medium-heavy festival, play in three full-fledged bands (5K HD, Schmieds Puls, My Ugly Clementine) performing at the festival PRIMAVERA SOUND and weep over a beheaded Medusa at the KUNSTHISTORISCHES MUSEUM WIEN. Stefan Niederwieser talked to the artist about her band projects, Henry Purcell, showcase festivals, and witch burnings.

Schmieds Puls, My Ugly Clementine, Ganymed in Love, 5K HD, co-curator of the Popfest Wien, music advisory board in Vienna. How do you do it?

Mira Lu Kovacs: It miraculously works with the right partners. I am a bit controlling and don’t like to delegate. I am in a phase of high output, which I have to process. My Ugly Clementine with Kathrin Kolleritsch, Barbara Jungreithmeier, Sophie Lindinger and myself is a nice new thing, nobody expected these reactions. Finally I’m a guitarist, standing in the background, in a very talented group. Communication is another level, which is probably because of us being women. I left the music advisory board in December 2018 due to lack of time. This is important work, it was too much responsibility with the Popfest Wien.

Isn’t it even worse to be a control freak when you want to have a say in stages, videos and artworks?

Mira Lu Kovacs: Exactly, it’s never just what you see in public. Schmieds Puls in its previous form no longer exists, the drummer and bassist have changed. The band was great, but I wanted to give myself the freedom to change my music, for which another line-up might fit better. We were together for seven years, there is no bad blood. And for those who think that everything will be different now: I’m the composer, the organizer, it’s something I developed together with my partners. I can’t stop with Schmieds Puls.

Do you often not get a light on the street like in the video for “Never Be Yours”?

Mira Lu Kovacs: I’m a militant non-smoker, but I grew up in an environment where everything was smoky. I haven’t been to any place where there’s been smoking for three years. My voice is sensitive, I have to accept that. I always wanted to smoke, I would like to make this cool gesture. Each of us had two seconds of cameo. Barbara did an awesome job, I almost didn’t recognize Kathrin, and Sophie showed her best side.

Mira Lu Kovacs: Sophie is an incredible all-rounder. She produced the whole album, recorded almost everything, composed, made the concept, she organises everything. Highest props! Sophie was one of the first women I met just for a tech talk. A year ago she asked me if I could imagine only playing guitar, I said: “Yes please, for once not standing in front”.

Your first show in Vienna was sold out within hours. Why wasn’t it moved?

Mira Lu Kovacs: We thought about it, but it worked. I finally wanted to play in the Rhiz, I’ve never played there before. There will be more dates.

Is the vinyl on the turntable in the Substance Recordstore already the finished album of My Ugly Clementine?

Mira Lu Kovacs: I think it’s still coming. The album should develop organically and stress-free. There is a repertoire that we presented on 14 May at the Rhiz.

And the medium-term plans?

Mira Lu Kovacs: Phew. I don’t know what I am allowed to say. What do you mean?

There will be more songs soon, at some point an album, then you will see if the tour will happen in the same half year or not until the following half year.

Mira Lu Kovacs: Sophie already said in an interview that there will be an album next year. She is constantly working on it, now we are more involved, smell the bacon and enjoy the collaboration very much. Many songs are made by her only, there is a fixed plan, we get involved with the new songs and do a lot in the arrangement.

The project “Ganymed in Love” brings the paintings of Kunsthistorisches Museum to life. You chose the painting “The Head of Medusa” by Rubens. Why?

Mira Lu Kovacs: Medusa’s story is incredible. She is the only one of three sisters who is mortal. And maybe that’s why she is the most beautiful of the three. Because she is so beautiful, she is raped on the altar of Athena by Poseidon. Athena is so angry that she curses Medusa. Her snake hair and her petrifying gaze isolate Medusa from her world. This drives her mad. She lives in a park of fossilized people. Perseus beheads her while she sleeps. And Rubens paints her as a monster. De facto she was a victim and was used again and again. It touched me so much and made me angry. I think this story can easily be implemented in today’s age. That’s what I associate with love: violence. Often times you can’t choose love, love can be an intoxication in which you feel trapped. Medusa’s ability to decide was taken away. That’s why I wanted to complain, I want to cry for and with Medusa.

“WITCH BURNINGS WERE GENOCIDE ON WOMEN… “

Medusa, witches, is this just a coincidence or do we have to reinterpret these female figures despised by the patriarchy?

Mira Lu Kovacs: Certainly. Witch burnings were genocides on women, these were systematic killings of women because they defended themselves. They were often the healers of society.

Do you listen to Henry Purcell often?

Mira Lu Kovacs: I have my favorite songs. Purcell was a songwriter like Schubert later in his life. I love “When I’m Laid In Earth”, which I sing on Ganymed, very much. But also “What power art thou” from “King Arthur”, of which there is the famous version “Cold Song” by Klaus Nomi. Purcell translates the king who freezes to death and dies, through the way they sing, very staccato with vibrato. He did a crazy job.

Mira Lu Kovacs [laughs]: The „Seitenblicke“ (an Austrian society magazine on TV) weren’t there yet. When I was twenty I worked as a museum guard at the Kunsthistorisches Museum, I know the house, the back ways, I like it there. It’s a little cold. In the beginning I stand on the main staircase in front of the lion sculpture in a black mourning dress for half an hour and raise my hands. At seven o’clock sharp we go to our stations. I have a few minutes of break time in my performance and lie on a pedestal. I perform alone. Three hours later I am often rested, the work is intense, almost meditative.

I would like a performance in which the creaking of the floor in the KHM is processed.

Mira Lu Kovacs: Yes, I don’t think it should be perceived as so annoying, even though it obviously is.

Is studying jazz or art a mistake?

Mira Lu Kovacs: It’s not an error, but I wonder how sensible it is. If you want to understand something, you need a reason. Sometimes it’s great, looking back I am sometimes very happy with the path I chose.

I asked you the same question in an interview two years ago.

Mira Lu Kovacs: I hear horror stories from talented people who were trained at institutes to lose the things that make them special. That’s the worst part. Miles Davis and Charlie Parker did their own thing. Then institutions were created to study something that is very independent. A lot of times I don’t think that’s the right way to go.

How has the band structure changed in 5K HD?

Mira Lu Kovacs: It has changed. We have different approaches. Over the last few months Manu Mayr and I have been composing together a lot, sometimes it was our producer Monophobe [Maximilian Walch; note] who put everything into context. There is a fantastic album brewing.

5K HD were playing at Primavera Sound. On which stage?

Mira Lu Kovacs: We played on the “Night Pro Stage”.

You played at the Eurosonic Festival. Can you say how much it did for you?

Mira Lu Kovacs: A lot. But all this is still in its infancy. We will present a few dates, have made contacts, important things are happening that I can’t say anything about yet. Last year would not have been the right time for the Eurosonic, not even for the Reeperbahn. Hence the decision to do so this year. 5K HD and Schmieds Puls are also no longer strictly divided, one year this, the other year that. That didn’t turn out right for anyone, I don’t want to take such a long break. I don’t resist it anymore, the others don’t either, now we do everything at the same time [laughs].

“THEY SHOULDN’T BE PLAYING EVERY BULLSHIT.”

When and how should bands play showcase festivals?

Mira Lu Kovacs: They shouldn’t play every bullshit. Not all showcase festivals are equally important. As a German-speaking band the Reeperbahn is very important. There are some that focus on indie pop. There aren’t all too many that would do Schmieds Puls any good, while for 5K HD there are many. But generally speaking, the business is a poker game, a lot of it depends on luck, being at the right place at the right time, to have the right face and the right style. A strategy is good, but even the best strategy can fail.

How much well-intentioned advice do you get for Popfest?

Mira Lu Kovacs: Sometimes there are complaints, but we know why we made every decision we made. I quickly tried to get a reputation as a bad cop, which blocks out a lot. The team is fantastic. Yasmo [Yasmin Hafedh; note] and I support each other, it’s easy to curate a festival with Yasmo. With her I know that everything fits, and that there are no racist, sexist people on stage. Only once or twice was there a need for a veto.

What would be an appropriate quota of women on stage?

Mira Lu Kovacs: A good percentage of women, people of color, non-binary people and people who would otherwise not be visible would be one hundred percent. By that I don’t mean that no men are allowed to come. But all the stories that cannot be told, the perspectives that are not represented, that is a huge mission, it would be ignorant not to bring them on stage. Nothing would be more boring than a mini Nova Rock at Karlsplatz.

Clubs and locations complain about free festivals, saying they could just as well write off the weekend. Can they be integrated?

Mira Lu Kovacs: I’m interested in changing cultural politics, and I see it as a nice job to help shape the festival and determine who gets this stage. But I understand the criticism. It is one hundred percent justified, important and right.