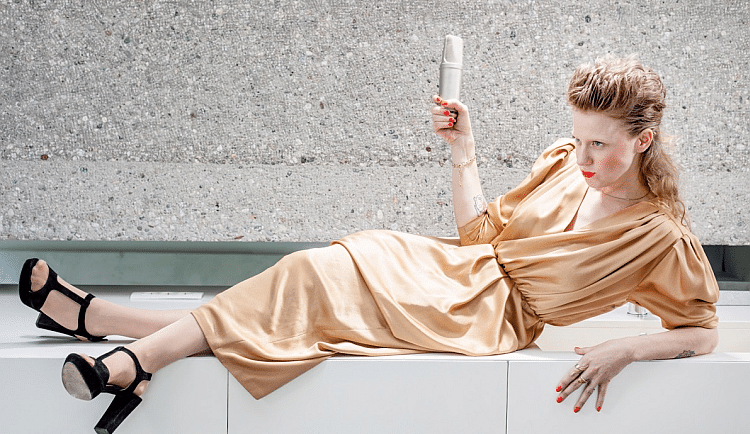 Anyone who has heard “Little Hell” and hasn’t been able to think about anything else since knows what is coming: The newest album from Ankathie Koi is finally here. It is titled “I Hate The Way You Chew” (Seayou Records) and it is jam packed with disco hits and 80’s feel.

There is so much more that can be said about this album, though. Beginning with its density. Ten songs at roughly three minutes a piece result in a rather short long player. But, as with some of the greatest punk albums, the lack of length can also be a strength. The songs all follow a leitmotiv without blurring into each other. In other words: Every song is an individual gem, one that is held together by a golden chain that let’s every individual gem shine with its own brilliance.

There are pop-songs, disco-hits and a few peaceful moments. And above them all floats the ethereal voice of Ankathie Koi. A voice bubbling over with a lust for life. It was already clear during the Fijuka days that both singers knew how to work with their strengths and weaknesses and were highly capable of playing to those strengths. But listening back to the music of Fijuka makes the solo paths they have followed even that much more astounding.

And that is the beautiful thing about the musical illusion created by a band. The harmony created seems perfect, but it isn’t because it was the fate of the protagonists to make that music. It’s actually exactly that combination of Ankathie Koi and Judith Filimónova that makes Fijuka what it is. And alone the two singers make completely different music. Judith Filimónova makes sophisticated EDM as part of Mandy + Judith while Ankathie Koi has become a living breathing disco queen.

BEAM ME BACK WITH A TIME MACHINE!

And that isn’t exaggeration. Because songs like “Hurricane” and “Cult” awaken memories of Donna Summer and “I Feel Love”. They use all of the elements required for a 70’s disco hit: a hard and driving beat, the slow development of the song leading to an explosive climax with synthesizers and bright and strong vocals. In these songs, and in “Foreign Heart (Caribbean Theme)” you don’t just get the feeling that Ankathie Koi was inspired by the good old days, but that she has actually managed to transport us back to the past with a kind of music time machine.

Especially “Foreign Heart (Caribbean Theme)” has so much to love. The kitschy melody of the verse creates the feeling of a day at the beach reminiscent of songs from The Pretenders or Katrina and the Waves. The refrain conjures up the spirit of Stevie Nicks and gives the song a pleasant depth that refines the kitsch without destroying the retro feel.
And then, just as the album has put you under its spell, there is “Little Hell”. A true ear worm that will never let you go.

“I Hate The Way You Chew” is an excellent album, and anyone who dares to speak of it with less than total enthusiasm risks being cast into the Time Machine created by Ankathie Koi in order to learn a lesson or two about music history.