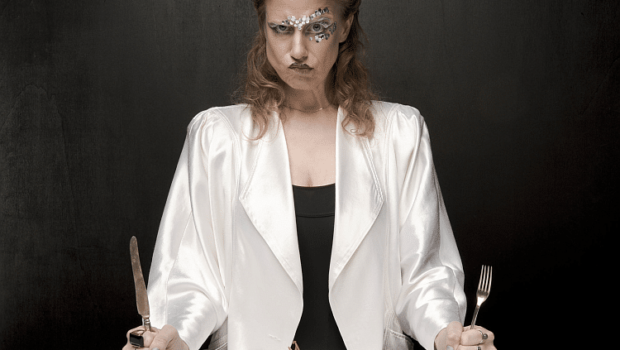 Expressive, explosive and the most beautiful mullet around: ANKATHIE KOI let’s it really rip. Her new album “I Hate the Way You Chew” is set for release in April, but she has offered a taste of things to come with her single “Little Hell”.

And this little hors d’oeuvre is so good that waiting until April might drive one a little bit crazy. But, it is what it is, and if we are going to have to be patient, we can at least pass the time watching the video for “Little Hell” over, and over, and over again. The clip features Ankathie at her most androgynous while she turns the head of a poor socks-and-sandals type. There are few artists who can reach this degree of androgyny and still be so sexy. Tilda Swinton, Peaches and David Bowie count amongst them.

Musically, the song has little in common with the last two. Instead, Ankathie Koi manages to create a mix of italo-disco, 80’s pop, and alternative dance a la Moloko. And it works. Too well, perhaps. “Little Hell” is one of those songs you only need to hear once to have it echoing in your ear canals for ages. And that has a lot to do with her unbelievable vocals that effortlessly switch between two octaves.

Is it a love song or a split-up song? With lyrics like „I could do things, I could say words, I could be mean, I can make your life a little hell” it is hard to be sure. It could still be interpreted as a declaration of love along the lines of “I love you so much that if you break my heart I will make your life a living hell.” Whatever the intentions, the text adds just as much to the songs ear-worm qualities  as the music does.

THE GENRE-MIX IS ON POINT

Musically she has drawn on the powers of Powernerd Paddy. Paddy and his two colleagues in Powernerd are known for their excessive use of nostalgic synths. Beni Brachtel and Patrick Pulsinger have also played a role on the new album. One that makes it seem, at least judging from this single, as though it is going to have little in common with Ankathie’s duo project Fijuka. Suspenseful anticipation of the albums release isn’t just an option, it’s a must!