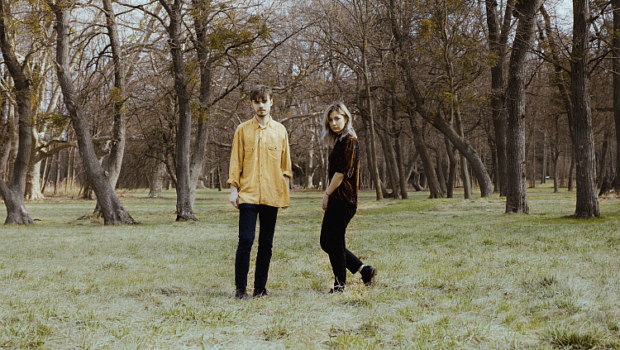 In 2016 LEYYA released their debut album “Spanish Disco”. It brought them success well beyond the borders of Austria. The single “Superego” landed at the top of the FM4 charts and they reached the pinnacle of the alternative Olympus with the FM4 Award at this years Amadeus Austrian Music Awards. Now, together with Bilderbuch they have made Upper Austria the centre of internationally recognised alternative acts. MARCO KLEEBAUER and SOPHIE LINDINGER spoke with Julia Philomena about ambition and industriousness, humour in the pop business, and cheap instruments as inspiration.

Last year Leyya was nominated for the FM4 Award at the Amadeus Austrian Music Awards. This year you won. What does the award mean to you?

Marco Kleebauer: For us the FM4 Award means that people have realised that we make music and that people appreciate our hard work. There is no denying that the Amadeus is the most important Austrian music award, and the FM4 Award is certainly the coolest we could imagine. FM4 makes a major contribution to the music infrastructure and without the station we wouldn’t be where we are now.

Sophie Lindinger: If we wouldn’t have won we probably would have kept on going as we had been. But it is a nice feeling to know that your music is appreciated. It is a confirmation that hard work and ambition can pay off.

From teeny-rock from Efferding to successful alternative-pop that works well beyond the Austrian borders – a very public career development that has shown increasing professionalism with every new video. Was it a conscious decision to become more accessible?

Sophie Lindinger: When you start making music at 12 you just have a cellar, a guitar, and a voice. You make what you like to listen to, and in our case that was rock. Our music matured as we did. As we continue to develop, our music will continue to develop with us.

Marco Kleebauer: It was a challenge for us to combine depth and complexity with pop in a way that shields the listener from the construction behind it and lets them just fall into the music. That is the ultimate skill. But no matter how good we get at it – a major station like Ö3 will probably never play our music.

Sophie Lindinger: We will always be too weird for Ö3.

Marco Kleebauer: You can’t please everyone. Leyya probably wouldn’t do too bad. Just the opposite, it might increase peoples acceptance for new and different music.

Sophie Lindinger: But the majority would have a problem with it since we aren’t totally polished. Our acoustic is wilfully edgy and doesn’t fit into the clean Ö3 soundscape.

On internet platforms, Wikipedia or oe1.orf.at for example, you can read that Leyya comes from the Inuit word “marketing strategy”.

Marco Kleebauer: That was a joke. I had to write a text about our band once, and I found it so ridiculous that I wanted to write something silly and I thought people might pay a bit more attention if there was some strange fact about us. I liked the idea that Leyya meant something. In reality it doesn’t mean anything at all (laughs). Leyya just doesn’t have any Google search competition, and that was the main thing then.

Sophie Lindinger: I don’t know who wrote the Wikipedia article but I find it really funny how uncritically the information was accepted. In the end it really isn’t that wrong, because our concept really did work.

Marco Kleebauer, you are also a member of the duo ANT ANTIC and also have a solo project KARMA ART. Sophie Lindinger, you occasionally provide vocals for the Viennese DJ MOTSA. With the success of Leyya, do you have enough time for side-projects?

Marco Kleebauer: I try to delegate the things that don’t completely interest me. Management or social media stuff, for example. There isn’t a lot of time next to Leyya and when I do have the chance to work on other projects I would prefer to be able to concentrate on the music.

Sophie Lindinger: There are phases when there is no time for anything but Leyya. Most of our energy goes into the band. But variety helps to get a breath of fresh air. Other projects help bring new ideas. Variety is important.

The Eurovision Song Contest also offers a lot of variety. And fireworks. Would Leyya be interested in taking part in a contest like that?

Marco Kleebauer: Never! Never! Never! For a very simple reason. We aren’t really interesting characters. If I were to get on that stage no one would see me. The Song Contest is about entertainment. That’s not bad, we just can’t do it. If music needed a good story to survive, fascinating people in fancy costumes, then Leyya could just give up.

Sophie Lindinger: Some of the reasons that Salvador Sobral probably won was the fact that he had a heart condition and that he really stood out with his ballad. When everything disappears into a musical swamp the focus goes to the most interesting person. We saw that with Conchita Wurst.

Marco Kleebauer: The sporting character of a competition or a casting show is questionable. If I have something to say then it should be relevant enough that it can carry itself. The process might be more tedious but the success is more lasting.

THERE ARE SO MANY GOOD MUSICIANS THAT NEVER FIND THEIR AUDIENCE

Do you think anyone can become successful with enough perseverance?

Marco Kleebauer: Of course there is a large element of luck involved. That comment was rather exaggerated. Will and desire aren’t realised on their own. There are so many good musicians that never find their audience. No one was interested in us for years.

Leyya hasn’t just developed acoustically over the years, but optically as well. Do you think that finding the right appearance helped your appeal?

Sophie Lindinger: We did our first press photos three years ago. I had just moved to Vienna and was still shy and reserved. I wasn’t interested in putting on an act. My confidence increased with every live show and I gained the courage to try out new things.

Marco Kleebauer: For me it was just the opposite. At the beginning I thought that hairstyle and clothes were important. In the meantime I have been able to drop my mask. I am who I am, and when it comes to fashion I am no pioneer. Perhaps this progressively more authentic appearance will be felt to be appealing.

Sophie Lindinger: We complement each other quite well. I am honestly interested in fashion and he is honestly disinterested in it. (laughs)

NEVER TAKE YOURSELF TOO SERIOUSLY. THAT IS IMPORTANT!

Like the US Pop Queen Lana Del Rey, your content has less to do with sunshine and children’s smiles and more to do with serious subjects. In your current music video “Zoo” you play with the division of roles between men and women.

Marco Kleebauer: We are annoyed by this omnipresent assumption that the man plays the instruments, produces, just generally does the work, and the woman just hums into a microphone. It’s just not true. We both do the exact same work. She produces as much as I do. That’s what the idea for the video is based on. That we can play around a bit with prejudices and categorisations. We exaggerated it a bit then in the execution. I really exaggerate the vocals and then Sophie suddenly plays saxophone and then the lyrics “Don’t believe what they say” (laughs).

Sophie Lindinger: Never take yourself to seriously. That is important. I will always write lyrics about subjects that are important for us, but not in such a way that they take the upper hand, but hover in the background. You can consume our music as you wish, but if you are looking for substance you can find it.

According to Spotify you are most listened to in Berlin. Why do you think your music works best there?

Marco Kleebauer: Berlin is a progressive city with hordes of young people. That is probably the main reason. Our audience is students. It’s clear that we won´t be received as well in Osnabrück or Kitzbühel.

Sophie Lindinger: And due to the size of the country there are a few German radio stations that play our music. In Austria it’s mostly just FM4.

Marco Kleebauer: The phenomena of curiosity for the foreign is well known. If we were a band from Berlin, Leyya would probably work best in Vienna. Distance is attractive.

Is there any artistic attachment to your hometown Efferding?

Marco Kleebauer: Lyrically and accoustically our home town plays no role for us. We were musically socialised, like 90% of our generation, with US and British music. My parents listened to the Beatles rather than Schlager. There wasn’t a lot of Austrian influence in the music.

Sophie Lindinger: I was strongly influenced by the music school. Almost all Upper Austrian children are enrolled by their parents in a music school and are confronted with singing and instruments at a very early age. Without this knowledge I would have started making music much later. That early influence accelerated my development.

Marco Kleebauer: I am still critical of the recorder. It is the first Instrument that you are allowed to learn at the music schools. I don’t think there is anything more senseless than the recorder. If I had given my youthful enthusiasm over to the recorder, I never would have wanted to make music later. But thanks to my wonderful parents, I was lucky enough to avoid the recorder-trauma and got to start out with drums. That was certainly a major advantage for me. Maybe a bit weird when you already know with 15 what you want to do for the rest of your life, but energising.

What are you inspired by?

Marco Kleebauer: A bunch of inexpensive instruments. And right now any music that doesn´t come from Europe, or our cultural circles. For example I am fascinated by Indian music. Its not about well behaved notes, its about feeling.

Sophie Lindinger: We both try to find new approaches, other moods, that can come into their own on our next record. We aren’t done with it yet, but if everything goes well, it should be released this fall.