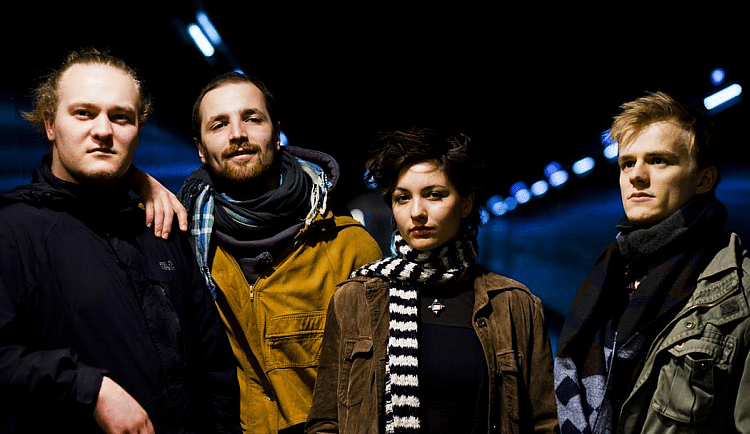 Evocative, groovy, deep: the Salzburg band ARAMBOA released their debut album on May 18th. It’s not just a first work, it’s a masterpiece.

Originally going by the name Black Lotus Experiment, they eventually changed their name to Aramboa. The name draws from a dream that Moritz Scharf (guitar, electronics) had four years ago. This word was the only thing that he could remember when he awoke. Together with Elena Shirin on vocals, Lukas Moser on keys and trumpet, and Andreas Stocker on bassoon he now produces music that doesn’t really fit any single genre. It is a mix of downbeat, trip-hop, IDM, neo-soul, bass music, dubstep and jazz. Does that sound strange? Or does it sound more like an all enveloping cloud of sound?

What does Mereon Matrix mean? Producer Moritz Scharf explains it thus: “A Mereon Matrix is a geometric harmonic matrix, an impulse-response-schema that can be made visible through music, for example when sound waves hit water. This reaction model is formative for biological processes and describes how frequencies can permanently change our surroundings.”

Listening to the album makes the title clear. Nothing here is out of place. Every single beat, every tone, harmonises with the rest. The voice fits in as though it was always so. The sound gives you goosebumps, it’s danceable, and flows through the body like a magical potion. This is particularly evident in “Only Coincidence Talks”, the third number on the album. The song isn’t really melancholic, not really happy, it’s more thoughtful and ecstatic at the same time. The subtle baseline provides the necessary groove.

The jazz comes in on “Styx” and announces itself through the wind instruments that provide a subtle melody for the musical imagery in the background. Things get a little brighter with the seventh track, “Pituitary”. Elena hums more than she sings, the melody feels like a loop although it is constantly evolving. The interesting structures of the songs in general make listening to the album an adventure in sound. Unconventional beat patterns combine with apparently chaotic passages that transform into perfect melodies. “Autumn Beats”, the last song of the album, is somewhat faster, but the mood is – fitting for fall – thoughtful and evocative without losing a certain cheerfulness. The winds play a greater role, providing the leading note and putting the listener in an almost hypnotic state.

After nine tracks the album, unfortunately, comes to an end. But we want more. Aramboa have created a really strong work that can be listened to repeatedly, discovering a new aspect to the songs on each new listening.