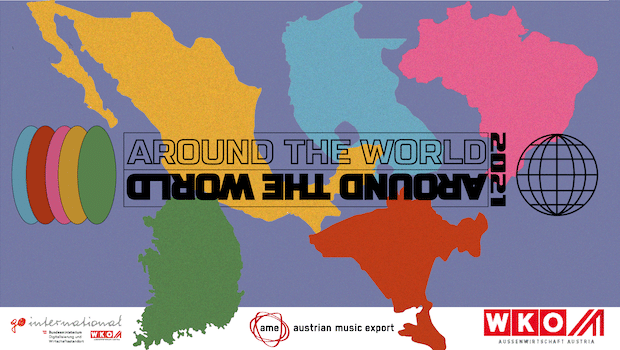 The corona pandemic has brought large parts of the music sector in Austria and internationally to a sudden and unexpected standstill. The usual exchange at international music industry events has been canceled or has shifted to digital platforms. Together with ADVANTAGE AUSTRIA, Austrian Music Export would like to provide a virtual program for export-oriented companies, labels and publishers, agencies and managements and launches the project “Around the World”.

In a series of webinars, a selection of music markets in South America, Africa and Asia is highlighted, global trends are discussed with selected professionals and networking with international colleagues is encouraged. The focus in spring 2021 will be on Brazil, Mexico, South Africa, India and South Korea.

Information on speakers and participants will be updated and expanded continuously. The participation in the webinars is open to artists, individuals, freelancers and companies and free of charge after prior registration. Need help or have questions? Please get in touch via email.

The Asian continent not only makes up around 60% of the world’s population, countries such as Japan, China and South Korea are also consistently in the top 10 of the largest music markets worldwide. The IFPI Global Music Report 2019 recorded overall growth of 3.4% for Asia, while South Korea, China and India saw stronger regional growth of 8.2%, 16.0% and 18.7% respectively.

Above all, the growth in the streaming sector is strengthening the local music scenes. MIDEM’s 2020 white paper on the Asian markets states that the potential number of music listeners in China, Japan, South Korea, India and Southeast Asia exceeds 3.5 billion, and that a significant proportion of customers, including the growing middle class, access music via Broadband internet or smartphone.

Latin America is also benefiting from rapid expansion in the digital sector and, according to IFPI, was once again the fastest growing region (+ 18.9%) worldwide in 2019. The digital sector makes up almost three quarters of the market and achieved a share of 74.6% in 2019. In Brazil (+ 13.1%) and Mexico (+ 17.1%), the urban agglomerations such as Sao Paulo, Mexico City or Rio de Janeiro are not only Trigger Cities and the drivers of the streaming sector, but also appealing tour stops for international artists.

Official statistics for Africa show that it only accounts for a very small share of around 2% of the world’s recorded music market. The very young average age of its 1.3 billion people and the increasing digitization nonetheless point to interesting potential for the music industry. South Africa is the most developed and industrialized country in Africa. An excellent infrastructure, for example in the transport or IT sector, and a well-organized music industry with sales far above those of other African markets make South Africa an interesting market for Europe as well.
There are numerous festivals and international digital platforms such as Spotify, Deezer or Apple Music are present in South Africa. Despite the rapidly increasing numbers in the streaming sector, high data costs, for example, still pose major challenges and thus radio and social media continue to play a decisive role in the distribution of music. South Africa is a market with some challenges, but it is showing strong growth – according to IFPI 2019, Africa is the second fastest growing region in the world with an increase of almost 15%. The country also has a very diverse and rich music landscape, which can make cooperation projects attractive from an artistic point of view.

The webinar series is implemented in a cooperation of AUSSENWIRTSCHAFT AUSTRIA and Austrian Music Export and as part of go-international – a joint initiative of the Federal Ministry for Digital and Economic Affairs and the Austrian Federal Economic Chamber.

In case you missed it…

You can watch recordings and see presentations of the past webinars here: