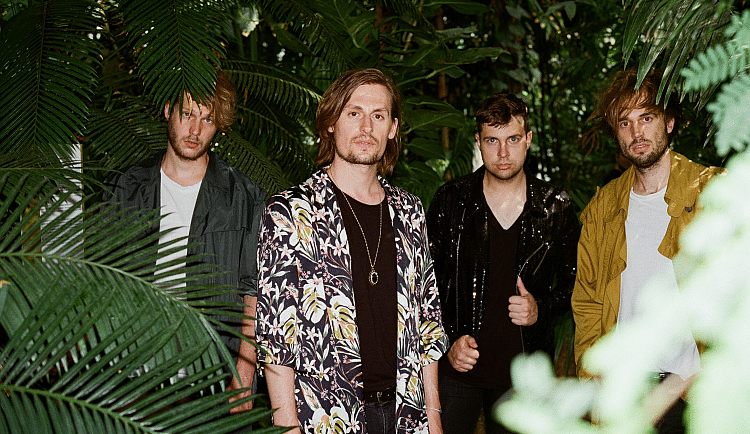 The Graz-based indie band FAREWELL DEAR GHOST established themselves in 2013 with their debut album “We Colour the Night”. In 2015 they played sold-out concerts in Beijing, Nanjing, Shanghai and Wuhan, which served as the subject matter for their acclaimed single “We were wild once”. Now they have presented their latest album “Neon Nature”. Julia Philomena talked to the band about their new album, why every concert can be the best and how they approach the creative process.

Your new album is titled “Neon Nature” and will be released on October 13th, 2017 on “Ink Music”. Which guidelines does it follow or is it an organic development?

Andreas Födinger: Organic development is a good description, although this time the premise was that we wanted to have no structural boundaries. We tried to get rid of our musical habits and find new methods, new ways and approaches, to work as freshly as possible. I think we succeeded and it still surprises me. I’ve never heard us like this before. We were able to create our own cosmos. 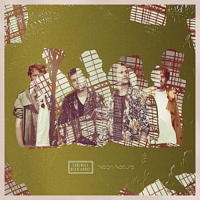 Can such a cosmos only be created through improvisation? What does your creative process look like?

Andreas Födinger: This time we worked very freely, sometimes individually and sometimes collectively. You can imagine it like a big canvas that we were constantly throwing stuff at. Not just paint, but also avocados. At the end of the day we created an unusual painting that follows a stylistic theme rather than a lyrical one.

Philipp Szalay: We really didn’t let ourselves be held back by barriers. We never followed a plan, a fixed idea, or a sophisticated concept. Each song was created differently. Sometimes faster, sometimes slower. The real challenge was to transform this chaos, which is necessary for us, into something coherent and understandable.

Philipp Prückl: The only limitation was the label’s deadline. But if it didn’t exist, no musician would ever finish their work. Other than the deadline the whole process was about getting out of our comfort zone, exploring our potential, and leaning as far out of the window as possible without falling down. There is nothing wrong with pursuing a path that has led to success in the past, but this time we wanted to discover new musical terrain. We didn’t just gain new experiences as a band, but it was also breath of fresh air for us as individuals.

Does “out of the comfort zone” also mean: professional versus self-taught?

Andreas Födinger: The study of music sounds strange in my ears. For me, this automatically means the appropriation of outside  influence. I find a childlike spirit of discovery much more exciting and worth maintaining as long as possible. Of course, that is very difficult in our society, but if you push yourself and constantly remind yourself how important and refreshing an inexperienced approach is, then you can achieve it. For Farewell Dear Ghost, it was time to spark a new creative fire and explore the computer with all its boundless possibilities. We explored the nature of expression and allowed our creative impulses free reign. I know you can study electronic music, but the exciting thing for me is that you don’t need to in order to let off steam and create interesting sounds.

Philipp Prückl: Innocence is always great! Legendary pop songs have been written by people who had no clue about the theory behind a pop song. I think we found a good balance with “Neon Nature”. There are simple songs that are easy to listen to, and others that we thought of as more thoughtful and that might require more attentiveness.

Alexander Hackl: Studying an instrument can help you technically but not necessarily artistically. Similar to all other branches of art. For me, I have found that instrumental perfection can get in the way. Knowledge about the actual possibilities of the instrument can be immensely limiting in practice. I remember a year ago I wanted to record new guitar sounds. At that time, a friend advised me to put the guitar down and try out other instruments and come back to the guitar later. That was very helpful. Musical detours are always good. As far as our band, and especially the new album “Neon Nature” is concerned, I can probably say for everyone that we have never experienced such a progressive working process before. Everyone pushed their own boundaries, everyone courageously ignored their insecurities, and in the end this is why our new album sounds so fresh. For us as a collective, it is a result of which we are very proud. We will see how the media, the press, colleagues, etc. react [laughs].

In 2015 you released the single “We Were Wild Once” which refers to your tour of China in the same year and concludes with the phrase “We won’t let ourselves be tamed.” A thematic statement?

Alexander Hackl: Looking back, the statement fits very nicely into our history, but it was not a conscious leitmotif to step courageously and uninhibitedly into the future.

Philipp Szalay: We might have subconsciously known what would be coming.

Andreas Födinger: Very fateful. It’s a good thing we listened to our instincts, that is probably the charm of it.

Has the China tour changed anything with regard to your relationship with the audience? Are smaller concerts in Austria now more relaxed or is stage fright independent of location?

Philipp Szalay: Every concert is THE ONE! Of course we look forward to large concerts, but you are always excited! Every show is special.

You named yourselves after Tobias Kuhn’s song of the same name, were support act for The Naked and Famous and with Nada Surf on tour. What are your main musical influences, your existential companions?

Philipp Szalay: I couldn’t reduce that to one or two names. There have always been important influences that are sometimes more, sometimes less dominant or influential.

Andreas Födinger: We have also had a lot of different genre influences, everything from Mozart to Robert Hood.

Philipp Prückl: The starting point for all of us was probably Coldplay and the like. You can hear this on the first album, but sound-wise it changed very fast. We had a really intense Justin Bieber phase[laughs]. Actually, we really have started to be very interested in pop structures.

Andreas Födinger: That wasn’t just exciting from an economic point of view, but we eventually really enjoyed it!

Philipp Prückl: If you try to produce a sound that already exists, something interesting happens. Bon Iver, for example, was present for a very long time. We were immersed in his world – similar to Justin Bieber – for a long time. Ideally, in the course of this one finds a new idea for one’s own band, one that can open new doors.

Andreas Födinger: When we’re recording an album, though, this phase has to already be over. It can be very irritating to constantly deal with another’s music while you are trying to finalize your own. The moment the album is finished, it will be fine again. Your attention is freed up and the desire for new inspiration is great.

Philipp Szalay: The recording process is like a state of emergency. I always get very manic and have to analyse every note. That doesn’t have much to do with inspiration [laughs]. Sometimes obsession can also be a stimulus that leads you to exciting explorations, but as a rule at this point in time any foreign influence is dangerous.

Can you tell us a little more about the recording process?

Alexander Hackl: In total, the recording process took one and a half years. From May 2016 to October 2016, we just experimented – without any output. It was extremely important for us that the music didn’t leave the room and that we could move freely for as long as possible.

Andreas Födinger: Feedback is always difficult, especially if you are a bigger band and you have to satisfy four filters anyway. We are our strictest judges.

Philipp Szalay: There are, of course, individuals whose opinions we value highly, but in the end, I only trust us 100% and not an outsider.

“WE WANTED TO BUILD A WORLD: BIG, GLITTERING, AND COOL.”

“Moonglass” is one of the two previously released singles from the album. In it you sing “I am your boy, let’s make this dance slow” is “Moonglass” more than just a love song?

Philipp Szalay: Basically “Moonglass” isn’t a love song at all. The song is more concerned with the question of how far you can get involved in something and at what point you involuntarily let go. It is about an initial subservience that leads to a situation over which one loses control.

How homogeneous or inhomogeneous are the numbers of the album with regard to the mood?

Philipp Szalay: “Neon Nature” is supposed to function like a small utopia. We wanted to build a world: big, glittering and cool. Lyrically we created many different figures that move through this seemingly magnificent world and very quickly reveal the ambivalence of such apparent perfection.

Andreas Födinger: We have also addressed the gender discourse a bit. It was fun to play with masculinity, puff out our chests and then put on a crown, be weak when everyone is strong, and vice versa.

Is “Neon Nature” a concrete reaction to socio-political events and influences?

Andreas Födinger: In concrete terms, we aren’t reacting to anything, but subconsciously probably always.

Philipp: If you want to, you can find a context, but we certainly aren’t pointing any fingers!

Philipp: Art is more than just entertainment, but I think it’s very okay if it doesn’t want to be more and our audience is just happy to have seen a cool show.

Would you play for a political party?

Andreas Födinger: I would play for a movement, for example at every Refugees Welcome event.

Philipp: I find it rather difficult to play for a party. Each band has to decide that for itself. As private individuals we are all very political, but we don’t want to position ourselves politically as artists at the moment.

Philipp: It also depends on the situation. When you think of national or international runoff elections, positioning takes on a different meaning and necessity. In America, for example, many musicians played for Obama.

Andreas Födinger: We will see what result we are facing in the parliamentary elections and what urgency we will feel to express ourselves artistically. It may well be that sooner or later this will be the case, but I believe in a good future[laughs]!

Why does the music of Farewell Dear Ghost work so well in Germany and what is keeping you in Austria?

Andreas Födinger: Theoretically, nothing is keeping us here, but I think that it is still possible for a musician to go far with the spirit of the Austrian soul. We live in a globalized world where English language pop music can work anywhere.

Many thanks for the interview.