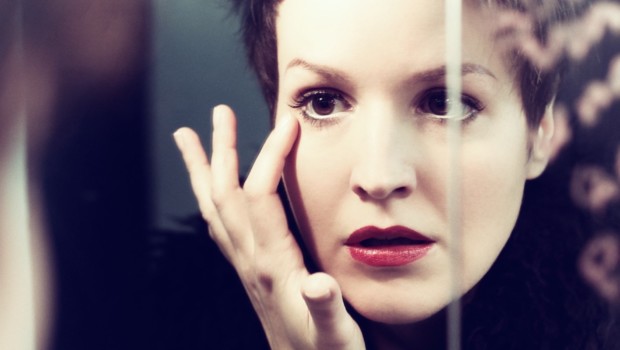 There are musicians and artists who never conform to any type of categorization and with their full body of work vehemently oppose any kind of expectation imposed on them. One of these intrepid musicians is Agnes Heginger, who without doubt belongs in this category of artist. Looking over the multitude and diversity of projects that she has been involved in over the years, it is clear that since her early years as a budding talent in Vienna, she has been one of the most diverse artists in all of Austria. She has shown throughout her career that she can have success within a range of genres and styles, and in a wide variety of musical contexts. Whether it be Jazz, traditional folks music, electronic, experimental, pop or with pure improvisation, Heginger has shown that she excels in almost an musical context, and isn’t afraid to show her chameleon-like ability to fit harmoniously into challenging and new musical situations.

She elaborates:I leave all my own private craziness behind and let stillness take over my deepest desire. The most beautiful thing is when I can sing, listen, play, and see as a child, when it becomes a kind of magic; that’s the most extraordinary thing. I have a great desire to dance with my voice, to fly with it!

Heginger, born 1973 in Klagenfurt, has always held the freedom to express herself musically, without any preconceived notions, in the forefront of her creative approach. She first studied classical solo voice in Vienna, before finding that too restricting and continuing to the University of Arts in Graz where she also finished her studies, with honors, in Jazz voice. It was already becoming clear that she wasn’t focused on just one musical outlet, but that she was on a path to fuse traditional and contemporary styles together into something uniquely her own.

Currently Heginger holds the position of Jazz voice docent at the Anton-Bruckner University in Linz, but continues to develop her craft, and, as musical free spirit, to reject following traditional and dogmatic notions of a typical vocalist, whatever they may be. Her passion and curiosity pushes her to continually strive for something new and fresh, and drives her from the completion of one project, quickly to taking on the next one thereafter. It is impossible to see her ever being bogged down in only one style or project.

She seems to have been involved with almost every and any person of mention within her native Austrian music scene. With Karlheinz Essl she probed the Avant-guard electronic music scene, in duo formation with Klaus Wienerroither the traditional folks-music and pop, in trio with Nika Chritoph Cech and Peter Herbert she connects Jazz, folks-music and vocal improvisation, as with the Paul Gulda Ensemble she dedicates herself to pure experimental Jazz. These are only a smattering of examples of projects and ensembles that Heginger is involved in. She has also worked with (amongst others): Georg Breinschmid, Krzystof Dobrek, Roland Neuwirth, Franz Hautzinger and Elisabeth Harnik. It is clear with this list; Heginger knows no musical limits or borders.

For an artist with such diversity and freedom of expression, it is difficult to say with whom and in which style and context she might work in the future. What one can say with surety is: that with her talents and musical dexterity, Agnes Heginger will without a doubt continue to surprise us, long into the foreseeable future.