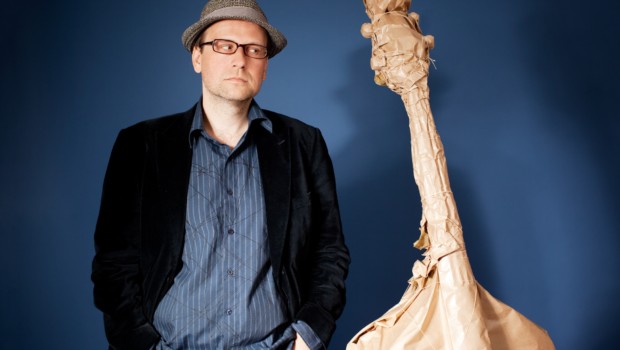 If you’re looking for the most influential and important jazz-musician within the Austrian music world, then at the top of the list you would find the name, Georg Breinschmid. A glance over the résumé of projects with which the compose and contrabassist has been involved makes it clear: here is a musician who is not afraid to push his own limits and one who generates his own playing field of musical expression.

Breinschmid prefers to be somewhere in between a multitude of musical styles, and has found success here, being awarded the prestigious Hans Koller Prize in bot 2002 (together with Arkady Schilkoper) and in 2003 for the album, Muave with Alegre Correa. He isn’t prone to repeating himself, and prefers to continually strive towards something new without fear of losing his already garnered popularity. Driven by his curiosity and bravery, Breinschmid generates something always unfamiliar yet singular musical mixture of styles between jazz, classical, world music and free improvisation, although his path towards jazz specifically was not a direct one.

Georg Breinschmid studied classical Contrabass at the University for Music and Performing Arts in Vienna, Austria. Directly following his graduation he was already engaged with the highest echelon of classical orchestras such as the Vienna Philharmonic and the Vienna Symphony, as well as other chamber music ensembles (Amadeus Ensemble, Kontrapunkte and Die Reihe) and the Lowe-Austrian “Sound-Artist Orchestra”. Over time though, Breinschmid was pulled ever-more in the direction of jazz, where he saw more potential for his own musical evolution and growth. In his owns words,”I always had more of a natural tendency or inclination towards jazz than I did to certain types of classical music, which even today I haven’t yet really found an emotional outlet  for.”

His decision was made, and he turned his back on the classical orchestra path he was on to pursue the next level of his career as a freelance jazz musician. In no time at all he had a reputation as one of the most diverse and versed bassists in the international jazz scene. He joined forces with legends such as Archie Shepp, Charlie Mariano, Kenny Drew Jr., Biréli Lagrène, Wolfgang Muthspiel, Triology, Megablast, and Harry Sokal to name a few. Additionally, between 1999-2006, Breinschmid had a fixed placement in the Vienna Art Orchestra.

In all of his musical endeavors and wherever he is engaged, Breinschmid shows himself to be a flexible and chameleon-like musician who easily fits a multitude of projects. Both his albums and his projects show an immense openness and adaptability; whether it be the art of improvisation with his longstanding colleague Thomas Gansch, or his most acclaimed album “Wien bleibt Krk” which plumbs the depths of Balkan folks-music, to the project “Liszt Café” with the Janoska brothers, following in the great composer’s footsteps. Whatever Breinschmid undertakes, he always seems to be a few steps ahead of the pack.

The love of experimentation as well as his unquenchable curiosity for the new, gives wings to this contrabassist and composer to reach the highest levels of creative inspired output. With his talent to always develop himself and reinvent his music, we can expect to hear more from this artist for years to come.
Michael Ternai
translated from German by Austin Settle
Photo: Julia Wesely