A pioneer in in the field of electronic music, HANS-JOACHIM ROEDELIUS is considered one of the founders of contemporary popular electronic music. Remarkably prolific, Roedelius has appeared on well over 100 releases between his own work and collaborations. Born on October 26th, 1934, in Friedenau / Berlin, he has lived in Baden, south of Vienna, since 1978 where he began his career as a professional composer / musician / writer in the late sixties, with sound-experiments described as “anarchic musical actionism”. Well regarded as a collaborator, he has worked with many composers and musicians including Brian Eno, Holger Czukay, Michael Rother, Konrad Plank, Peter Baumann, Dieter Moebius, Fabio Capanni, Jurij Novoselic, Hiroshi Kobayashi, Andres Gil, Felix Jay, Nicola Alesini, Konrad Schnitzler, Alexander Czjzek, Eric Spitzer-Marlyn and many others.

He was a founding member of many experimental groups and projects including “Geräusche”, “Plus/minus”, “Per Sonare”, the free artslab “Zodiak” in Berlin, “Kluster”, “Cluster”, “Harmonia”, “Meeting Point Vienna”, “Friendly Game”, “Aquarello” and “Tempus Transit”. In 2011, Roedelius and Dieter Moebius broke-off formal ties with one another and Cluster. Roedelius went on to form a new variant of Cluster called Qluster. The new lineup consists of Hans Joachim Roedelius and Onnen Bock. He has worked with choreographer Caroline Carlsen for the “Theatro e Danza la Fenice” in Venice, with Esther Linley, Mark Lintern-Harris and Joao de Bruco for the “Wiener Festwochen”, the “Donaufestival”, the “Eurokaz” in Zagreb, the “Szene Salzburg” and other Festivals. 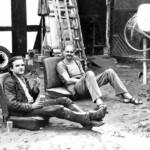 HANS-JOACHIM ROEDELIUS is considered a pioneer of electronic music worldwide. While the band CLUSTER (with Conrad Schnitzler and Dieter Moebius) was still a typical product of the wild, uninhibited subculture of the sixties – the … read more » 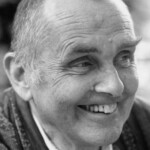 Sound-explorer, electronic pioneer and holdout. Hans-Joachim Roedelius is one of the unsung heros of pioneering experimental electronic music, who steadfastly explored a new medium of music without the notion of fame or fortune driving him. … read more »