Founded in 1998 by Sigi Feigl as a mainstream oriented orchestra, that among others others collaborated with the New York Voices, Jon Hendricks and Bob Mintzer, the Jazz Bigband Graz was able to sharpen their profile and raise international attention in 2003. In this year, Heinrich von Kalnein and Horst-Michael Schaffer took over the leadership.

After restarting with the program composed by John Hollenbeck “A Life Affair” (2005, with vocalist Theo Bleckmann), Schaffer presented himself as a composer for the “Electric Poetry & Lo-Fi Cookies” (2008), combining theremin sounds with influences of digital electronics and minimal music elements, as well as integrating spoken-word interludes. 2012 followed with the Jazz Bigband Graz’ album “Urban Folk Tales” released by ACT Music and featured among others Theo Bleckmann, Nguyên Lê and Gianluca Petrella as guest soloists. 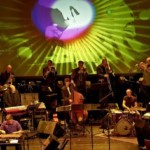