Austrian alto, soprano, tenor saxophonist, singer and composer Muriel Grossmann was born in Paris and grew up in Vienna, where she initiated classical studies of flute at the age of five until twenty-one, when she switched to alto and soprano saxophone for further studies.

In 2002 she moved to Barcelona where she started to lead her own bands for recordings and concerts. Muriel Grossmann is resident in Ibiza since 2004, which marks a very fruitful recording and performing period.

Since 2018  Llorenç Barcelo  (Mallorca) on hammond is part of her group.

“WHAT I KNEW WAS: I WANT TO GO TO THE SUN” – MURIEL GROSSMANN 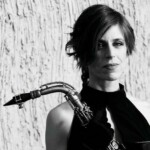 In London, the epicenter of the spiritual jazz boom, Viennese saxophonist and composer MURIEL GROSSMANN is considered a hot stock. She has releases on the renowned London indie label “Jazzman” and GILLES PETERSON is her … read more »