PRIM was formed in 2015 by three musicians associated with Vienna’s vibrating music scene and they have since then managed to impress critics and crowds alike with their progressive sound and technical virtuosity. The cultural scene of Vienna – the world’s capital of classical music – serves as an interesting background for their rather experimental but nonetheless accessible style. Their intriguing compositions and innovative use of the standard piano trio line-up differentiate them from standard jazz trios. Despite their diverse musical inspirations and individual manner of playing, they complement each other perfectly. Christoph Karas’ polyrhythmic illusions and drum & bass rhythms match Felix Biller’s film-musical expressivity and classically-inspired, lyrical melodies as well as Martin Melzer’s occasionally contrapuntal basslines.

PRIM mixes simple and lyrical melodies, rock riffs and drum ‘n’ bass with inspirations from classical music and jazz. The trio from Vienna released their debut album “More & Less Diminished” in 2016, followed by their EP “40 Days” one year later. 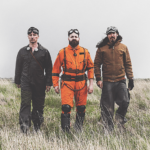 Every year in April, jazzahead! turns Bremen into the most important meeting place for the international jazz scene. The trade fair also features an integrated showcase festival. 40 bands from 18 countries will be on … read more »