Stephan Kondert is probably better known as SK, a producer, composer, bass player and the founder of SK Invitational. He started the music project in 2006 when he gathered the solid core of his musician friends on stage. A large stage since that group consists of altogether 16 people. SK experimented with Drum and Bass, Dancehall, and Hip-Hop beats to work out different ways to present the full range of the big band sound.  The first album, “SK Invitational”, was released in 2007 and got attention for it´s originality. SK Invitational´s second album “Raw Glazed” was nominated for the Amadeus Award in 2010 and became album of the week on the radio stations FM4 and Superfly.

The band has also been hired by some of Europe’s best independent and major label artists for recordings, performances and production. They appeared on the the album “Wir” from the Munich-based Rap crew Blumentopf and also on the live album “sweet16” from the Austrian Hip-Hop group Texta. 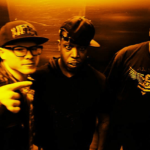 Straightforward and simply a brilliant comeback. Stephan Kondert together with a genuine all-star group behind him has brought his project SK Invitational back to life in the most grandiose manner. Their new album “Golden Crown” (Kopfhörer Recordings/Groove … read more »