Tenta play art rock by their own definition. Those music lovers who also know how to gain something from other forms of the arts immediately feel addressed. Rock music that expresses itself not only in discharged testosterone, but also in artistic demands? How wonderful. Also musically this kind of rock by Tenta is demanding. It moves somewhere between the atmosphere of psychedelic rock, the instrumental intimacy of progressive rock and the more catchy vocals of more radio suitable subgenres.

Even though most of Tenta´s music isn’t very conventional concerning both sound and songwriting, singer Andreas Kinzl manages to keep the songs accessible and catchy with his appealing voice. But what makes the sound of the band even more distinctive is not necessarily the frontman’s voice only. It’s the second guard of the band: the bassists. Yes, several bassists. Since 2015 Tenta have been playing in this unusual line-up with two bassists (Arthur Darnhofer-Demár and Nicolas Fischer), but without guitarists.

“Every band has a sweet spot” – an interview with Tenta 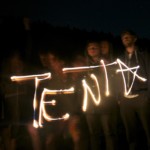 The experimental Viennese rock quartet TENTA oscillates between the sounds of the 70s and the current view of modern societies. The second album “W.E.I.R.D. Subtopia” is a big step towards the consolidation of the band’s … read more »