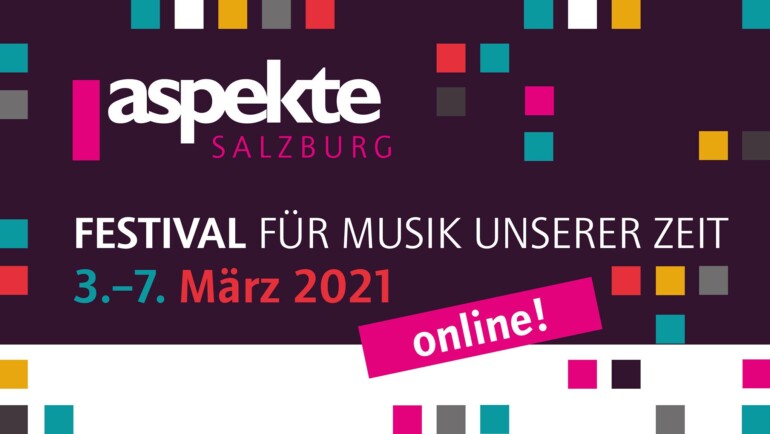 Openness and curiosity – BON VOYAGE, through the digital space!

This edition of the aspekteFESTIVAL is being held in an online format due to corona. This ensures that all ensembles, composers and musicians can present their art to a broad audience, in the digital space. On the one hand, the festival presents a wide spectrum of music of our current times, and on the other, it focuses on the Austrian composer Johannes Maria Staud, whose work both fulfills intellectually innovative artistic demands and also, through its clarity and comprehensibility, enables a pleasurable experience for the listener.

Young creative forces play a significant role this year; hence the numerous premieres of new works by Marco Döttlinger, Jakob Gruchmann, Maja Osojnik and Lorenzo Troiani, alongside new pieces by Klaus Ager and Alexandra Karastoyanova-Hermentin. Equally, the festival once again places emphasis on the importance of children’s and youth’s musical work with its series, aspekteSPIELRÄUMEN.

A map of music of our time, following different currents, keeping an eye on interpretations and compositions alike, and focusing on the composed work of the extraordinary composer Johannes Maria Staud. All of this is: aspekteFESTIVAL 2021. The Salzburg Festival may well be understood as inspiration and encouragement; even in a time when real concert life may not take place, to listen to and pay attention to those composers whose musical expressions may seem more difficult, more demanding, and at times more unpleasant, due to greater complexity. New music may be ventured, because it can be experienced intuitively, emotionally and atmospherically.

Professor of composition at the Mozarteum University since the 2018/19 academic year, Staud is undoubtedly one of the most successful composers of his generation. The artistic successes and awards, performances and commissions of the composer, who was born in Innsbruck in 1974 and was a student of Michael Jarrell and Hanspeter Kyburz, illustrate his distinguished international career. His music has been premiered by orchestras such as the Berlin Philharmonic and the Ensemble Modern Orchestra, and he has received commissions from, among others, the Vienna Philharmonic, the Cleveland Orchestra and the Vienna State Opera, where, a few months ago, the premiere of his opera “The Willows” took place.

The starting point of this program, dedicated to Johannes Maria Staud, is the violin concerto “Towards a Brighter Hue II” composed for the violinist Midori. This work has a memory, so to speak, as it is based on the earlier composed work of the same name for solo violin inspired by a sculpture by the English artist David Nash. The latter was premiered by Ernst Kovacic, who will also play the solo in the violin concerto at the opening concert. The Ensemble Resonanz, under the direction of Johannes Fischer, provides the perfect body of sound for this concert.