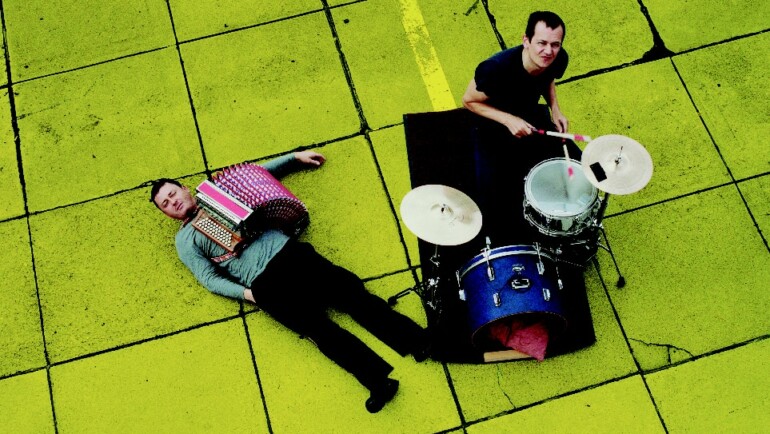 With a wild mix of folk, punk and hip hop, Attwenger are certainly one of the most exciting and talked-about formations in the Austrian music scene. For over two decades the Upper Austrian duo consisting of Markus Binder (drums, vocals, jew’s harp) and Hans-Peter Falkner (button accordion, vocals) has been taking listeners on a cross-genre thrill ride.

Playing with languages and mixing genres is Attwenger’s name of the game. In the course of their development, the band engaged in various adaptations of traditional folk music combined with Austrian dialect. Elements of punk, hip-hop, blues, break-core and drum’n’ bass contributed to the typical Attwenger sound, which has emerged as a unique mastery of central European folklore. Attwenger’s lyrics are for the most part committed to social criticism.

Thanks to features on the Austrian radio station FM4, Attwenger turned into an overnight sensation in the local alternative music scene. In the course of their band history, Attwenger has worked with various international musicians and groups, such as with the British avant-garde guitarist Fred Frith or the Serbian Roma brass band Boban Markovic Orkestar.

It is mainly due to Attwenger that dialect-poetry has found its way back into the local musical landscape. Singing in dialect is acceptable again and has lost its old-fashioned touch for the younger generation.

Over time, Markus Binder and Hans-Peter Falkner have refined their music with influences from various genres. With an unmistakable style,  the duo consistently manages to reinvent and expand its sound, which is perfected by their very specific use of language. At the moment Attwenger definitely belong to the best of their kind.

For the first time ever, Attwenger will be performing at selected locations throughout the United States and kickoff their U.S. debut  at the SXSW in Austin, Texas. Further concerts include gigs in New Orleans and New York.
Michael Ternai