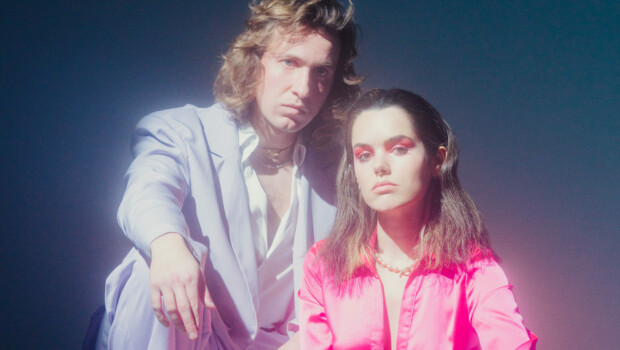 BIME has announced its 10th anniversary celebration in Balbao! And Austrian-Spanish duo, ATZUR will be there to join the party! The great international music industry event will celebrate its 10th edition in Bilbao from 26 to 29 October. 22 artists and 22 speakers have confirmed their attendance representing the United States, Colombia, Germany, Chile, France, Argentina, Poland, Mexico, Austria, and Spain. Read on to learn more about the festival and the band, ATZUR.

ATZUR is probably the only Austro-Spanish duo in the world of Alternative Pop that met on Tinder. Together they create a sound that lives between north and south, warm and raw, free and epic. Between Florence+The Machine and Woodkid, pop and punk attitude: the music of ATZUR has two faces, a dreamy and a wild one!

Formed in spring 2019, the band signed a record deal with Austrian label Seayou Records and released their first single “Running”. With a video produced in Spain, the single quickly entered the charts of Austria’s Radio FM4 and Germany’s EGOfm and stayed there for several weeks. The songs from their second EP Big Delirium made it into rotation on various Spanish radio stations like Radio3, Radio4 and Radio Primavera Sound. The duo’s long-awaited debut album will be released in spring 2023.

BIME is dialogue, work, proactivity and business. Since its birth 10 years ago, it is the place to meet all the people who work in the music sector and the cultural and creative industries. A community active 365 days a year through its online platform and with 2 annual meetings: Bogotá and Bilbao.

Both cities consolidate the bridge of cooperation and internationalisation between Latin America and Europe and become the centre of innovation, technology, networking and the future of the music industry.

On the heels of the success of the first edition in Bogota last May, the most significant international music industry event, BIME, celebrates its 10th anniversary from the 26 – the 29 of October in Bilbao. From its inception in 2013, this event brings together professionals from around the world in the capital city of the Basque Country, making it the epicenter of innovation, technology and networking, and the future of the music industry. The perfect space to reflect on the challenges that the future brings in an industry in constant transformation. Its growth has rendered it an international reference in music industry events. Since its first edition in Bilbao a decade ago, BIME has continually evolved and achieved notable growth in every way: the attendance of professional participants has tripled, with over 3,500 people in the last edition, representing 35 countries. The institutions collaborating in organizing this event have also risen to more than 30 worldwide. The involvement of the city of Bilbao has also increased as the number of halls hosting the showcases has grown from 3 to 11. The partnering educational institutions have gone from 4 to 28, and the number of students at BIME Campus has multiplied from the original 32 to currently over 150, including 18 international scholarship recipients. And the most significant growth has been reflected in the addition of a second location in America, whereby the annual event has become a gathering held twice a year, consolidating, in turn, the collaboration and development among both continents.

During this journey, the international scope has not only surpassed geophysical borders but also overcome the limitations of physical presence: the online platform enables participation from around the world and guarantees access to content, including networking at any time. BIME is the place for music industry professionals, not just in person but also virtually. It is a living community that, in addition to its two annual events, stays active throughout the year via the app. And now, on its anniversary, it is revealing its new logo and image, honoring its maturity and consolidation status achieved after ten years of constant development.

This Fall, the Basque Country hosts the upcoming edition of BIME in Bilbao for nearly a week, from Wednesday, October 26 through Saturday, the 29, to rethink music and everything surrounding it. The event will have two main sections distributed in different spaces. On the one hand: BIME PRO, the professional congress which will be carried out at the Euskalduna Conference Centre, and, on the other, BIME LIVE, which will be the ideal opportunity to share and celebrate live music.

The showcases schedule already boasts 22 confirmed artists; from France, ANNA MAJIDSON; from Germany, ALBERTINE SARGES; from Poland, IFI UDE; from Chile, GIANLUCA; CHINI PNG and NIÑOS DEL CERRO; from Argentina, LOS BESOS and HIPNÓTICA; from Austria, ATZUR; from the Basque Country, MICE, MERINA GRIS and IDOIA; from Catalonia, LA ÉLITE, 31FAM, CARLOTA FLANEUR and CHAQUETA DE CHANDAL; from Galicia DANI; from Murcia MUERDO, from Navarre, KATANGA DUB and EDU ERREA BAND, from Valencia SANDRA MONFORT and SANTERO Y LOS MUCHACHOS and many more to be confirmed thanks to the support from Andalusia, Colombia, Aragon, The Netherlands and Sounds From Spain.

Among the novelties of the upcoming edition of BIME PRO, it will open to new musical genres, including classical music, electronic music, and flamenco. Also, the edition will present the Film Music Lab, where film composers and directors will collaborate closely to score original music for different productions, which will be enjoyed live during the professional congress. This program will be accompanied by other panels covering composing for film and audiovisual productions, led by industry references. But there’s more, introducing the BIME metaverse. The ongoing innovative spirit that has characterized this event in its 10 years of existence has culminated in the metaverse of Uttopion, winners of the 2021 Startup Competition. The virtual world will be the backdrop of activities, awards ceremonies, and music.

CONSTRUCTING THE FUTURE THROUGH SIMULTANEOUS EVENTS

A deep dive into the international dimension to strengthen the connection between Europe and America, this year, BIME, in partnership with BASQUE MUSIC, will host for the first time a mission with the European Music Export Exchange, a consortium of European music export offices, which will bring Bilbao more than 20 music internationalization experts from around the continent.

BIME will continue reinforcing its commitment to equity and the MUSIC EQUALITY FORUM. Part of the program is devoted to discussing, giving visibility, and finding solutions to achieve a more egalitarian and inclusive industry. Partnering associations include MIM, Keychange, SHESAID.SO, Femnoise, Ruidosa, MUSAP, Descubreas and new ones such as WIM Colombia and MIM LATAM.

No doubt celebrations will shape this 2022. The European association of concert venues LIVE DMA celebrates its 10th anniversary at BIME, including the most relevant European lounges and the tenth edition of the FEST Awards.

The CAMPUS+ scholarship is now open for enrollment, offering 18 young people from Europe and Latin America the chance to participate in an advanced music industry training program for 5 days and the Start Up! Competition, with a chance to win a trip on the Trade Mission to BIME Bogota 2023, a tour that will introduce them to Venture Capitals in Silicon Valley, a mentoring process before the pitch with Bill Reichter from Pegasus Tech Ventures as well as a booth in the STARTUP Village.