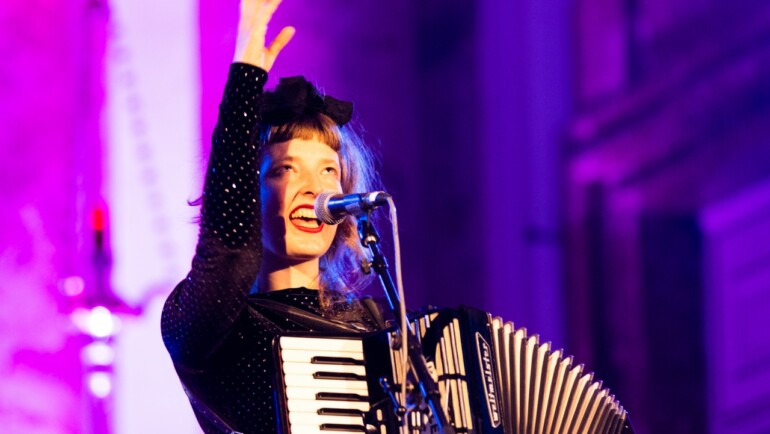 From Wednesday, October 19 to Saturday, October 22, 2022, the Altice Arena in Lisbon, Portugal will host the next edition of the world’s largest music fair for world, roots, ethnic, traditional, local and folk music: the WORLD MUSIC EXPO (WOMEX). We are proud to announce that this year Austrian artist, ALICIA EDELWEISS will be performing! WOMEX is an international PR, networking and showcase event where participants can make contacts, expand their network and discover new music.

Alicia Edelweiss is an Austrian-British singer, songwriter, multi-instrumentalist, artist and yarn-spinner, whose imaginative forays into dark folk tales, humour-laden autobiographical sketches and sideways observations on life are suffused with both a sense of child-like wonder and an arch contemporary savvy, couched in subtly insistent melodic ear-worms. She began her musical career as a teenage street musician during a two-year bout of hitch-hiking around Europe before settling in Portugal, where she had a fateful encounter with an accordion, which became the springboard for her dive into song writing. Returning to her home-town Vienna, she collaborated with many different musicians, performers and circus artists, before releasing her debut studio album, When I’m Enlightened, Everything Will Be Better, in 2019, featuring her in trio with cello and violin, which has led her to numerous festivals across Europe.

The aim is to bring the participating Austrian artists and companies from the music industry closer to the international professional audience, to offer an interesting marketing platform through a striking appearance and at the same time to generate a positive image for Austria with special promotions.

The joint appearance is also intended to present Austria in 2022 as a diverse and vibrant music business location with great growth opportunities in the field of world music, which is becoming increasingly interesting internationally due to the geographical location of Austria and in particular Vienna as a gateway to Eastern Europe.

The event is part of the internationalization offensive go-international, a joint initiative of the Federal Ministry of Labor and Economics and the Austrian Federal Economic Chamber, and takes place in close cooperation with Austrian Music Export.

This year there is a very special addition: participants at the Austria booth can apply for a music workshop and concert performance/gig on October 21 in Lisbon with musicians from Cape Verde. More information here.