Popkomm – one of the most important international trade fairs for the music and entertainment industry will take place this year in Berlin from the 7th – 9th of September.  The Popkomm especially offers labels, retailers, publishers and music-related companies the opportunity to present themselves and their latest products. Austria will also, by now already for the 17th time, be presented with a collective booth. Besides the booth, the Austrian pop music scene will be represented by showcases at the airport Berlin – Tempelhof. Among many others, Kruder & Dorfmeister, Killed by 9V Batteries, Bensh, Gary and Bernhard Eder will play concerts in front of an international audience.

Bernhard Eder („To disappear doesn´t mean to run away“| Solaris Empire, release date 01/21/2011)
“Perhaps the best German, but English singing songwriter Bernhard Eder succeeded in creating the perfect soundtrack for the autumn season. Time to light the candles, cuddle into a warm blanket and give melancholy free rein.” TAZ (Germany)

My Name is Music (“We Are Terrorists” | Pate Records/edel distribution, release date 03/11/2011)
My Name Is Music is a duo from Vienna, which creates its very own indie style in the tradition of a mixed double à la White Stripes, The Ting Tings, The Kills, or Blood Red Shoes. Since the release of the debut album “REVOLUTION” in the spring of 2010, things started to move pretty fast. The local and international music press was full of praise. In the John Peel Radio Sessions My Name Is Music was presented as the new sensation from Austria, on Radio Sputnik as the freshest band in a long time, the U.S. radio legend Sat Bisla played the album at American radio stations. In the UK-Indie Charts the song “Smooth Revolution” landed rank 30 in the very first week and the video was shown on TV. The second album with the programmatic title “We Are Terrorists” was released on the 11th of March 2011 (Pate/Edel/Soulseduction). The new songs are harder, more rebellious and eccentric.  In the same manner they accordingly perform their current shows.

Bensh (Clues | Odd One In/Hoanzl, release date 05/27/2011)
From the Austrian Alps to Japan, from Germany to Iceland and back to England: “Clues” is the debut album of the Tyrolean-born noisepop cosmopolitan Bensh. The album is the result of a six-year expedition to some of the most unusual places of current pop music productions. After a period of song writing and recording sessions with Dan Swift (Snow Patrol, Art Brut) and Gordon Raphael (The Strokes), Bensh ended up in Osaka, Japan, as part of a cultural exchange. After his return to Europe he lived and worked in Germany, United Kingdom, Austria and Iceland, where “Clues” was jointly completed with Biggi Birgisson (Sigur Rós).
Smashing … Quirky … A unique sound and style – Future Music (United Kingdom)
Catchy and full of details – TBA Magazine (Austria)
Fresh, juicy, catchy … at all-round package – Radio FM4 (Austria)
The Lovechild of Beck and Syd Barrett – Japanzine (Japan)

Diver (EP “Diver” | ink Music/Hoanzl, release date 03/2011)
During a hot summer in the attic of the perhaps most condemned building in Berlin, Stephan Ebert and Wolfgang Bruckner met to work on common musical ideas. In addition to breaks on the roof overlooking the television tower, first recordings were created, which were later sent via the internet under the name of diver to Vienna and then to Munich. Addressee is Olaf Schuberth, who extends the arrangements of the songs and tosses in new material. The music is emotional, reduced and honest. With acoustic instruments and the diversity of its voices, emotions are implemented quietly but forcefully. Some songs live from the contradiction between musical harmony and lyrical themes of uncertainty and disorientation. It is often about the difficulty of meeting the expectations of others, while remaining faithful to yourself and about the discrepancy between ecstatic feelings and rational knowledge.

DJ sets by:
Thieves Like Us (Andy Grier)
Jools Hunter
V Team
The Viennese label Seayou – established with the first release in February 2006 by Ilias Dahimène – releases artists like Paper Bird, Vortex Rex, Thieves Like Us, Sir Tralala, Love & Fist, The Eternias, Toxic, The Terrordactyls, Holiday For Strings and The Pharmacy. In addition to the international releasing activity, Seayou works as an organizer of concerts and clubbings, such as the “Seayou ABC – After Business Clubbing” 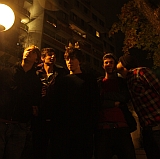 Killed By 9V Batteries (“The Crux” | Siluh Records/Hoanzl, release date in September 2011.)
The Styrian noise pop slackers KILLED BY 9V BATTERS surprised in 2011 with the announcement that they would collaborate on their new album with the Viennese techno pioneer and producer of the last “Hercules and Love Affair” record Patrick Pulsinger, to rehabilitate their long cultivated new-hate-post-nothing sound. The results are the “cheesiest” guitar solos of the band’s history, nature sounds, ’80s pop on the radio and downright epic synth scapes coming from Pulsinger’s rich instrumental pool – most evident on the single “Worst of Total Anarchy”. “Impulse Control”, on the other hand, is driven by an almost classical Batteries approach, and aims at all those who will never get enough of sub pop and amrep from the ancient days and those who have only just hooked on to male bonding, no age and japandroids.

Luise Pop
Luise Pop, founded in 2004, have dedicated themselves since the release of their debut album “The Car The Ship The Train” (Asinella Records) in March 2009 to the destruction of the implicitness of male domination in music. With the voices of smoky angels and melancholic larks, they bow nonchalantly before the Young Marble Giants, Sonic Youth, Tuxedomoon and Le Tigre. Together with Andreas Spechtl (Ja, Panik), who plays the drums, they are a band that is smart and sexy without having to use gender stereotypes. Powered by escapist arrogance, they race rumbling and clattering like mad lemmings  alongside  the abyss: Luise Pop know very well that their flirtatious post-punk detachment is not to be trusted, and capitulate to an elegant melancholy that reverberates with an echo of those times, where a pop song could unhinge the world in two and a half minutes.

Gary (“One Last Hurrah For The Lost Beards Of Pompeji”, Siluh | Loob, 2010)
A perfect reunion: After the success of the 2002 album “The Lonely Cnorve Machine”, GARY temporarily became a side show. Despite this, constant gigs were played in various formations and the band evolved over the years into a creative network where new songs and plans were continuously forged. With the help of producer Tobias Siebert, they finally managed to give the accumulated material the finishing touches. The result is “One Last Hurrah For The Lost Beards Of Pompeji” and is full of catchy guitar pop songs with unexpectedly skillful and daring reminiscents of Teenage Fanclub, Guided By Voices and The Lemonheads. GARY are Robert Stadlober (vocals, guitar), Rasmus Engler (drums) and Astrid Noventa (keyboards, vocals).

In 2010, Kruder & Dorfmeister celebrated the sixteenth anniversary of their label with the retrospective “Sixteen Years Of F ** king G-Stone Recordings”. Since then, they have been busy in New York, London, Rome, Los Angeles – and now Kruder & Dorfmeister will again honor the German capital city at the Berlin Festival in 2011. This very special evening promises an outstanding music experience with the best known representatives of Austrian DJ and dance floor culture – including the MCs Earl Zinger and Ras MC T-Weed and VJ Fritz Fitzke, who is responsible for the spectacular appearance of the live show. “Sixteen F**king Years of G-Stone Recordings Anniversary Sessions”: a must for all lovers of heavy bass sounds and driving beats.