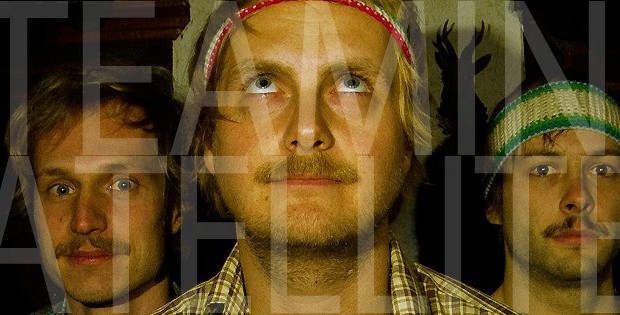 With the upcoming release of their second LP ‘Slipline’ and the ‚Slipline‘ tour through Germany, Switzerland and Austria in March, 2013 is looking to be a good year for the three boys from Steaming Satellites. To top it off, Steaming Satellites will kick start the new year alongside other Austrian acts at the Eurosonic Noorderslag Festival to be held in the Netherlands in January 2013.

Born in the mountainous region of Salzburg, the music produced by Max Borchardt (Vocals, Guitar), Matl Weber (Drums) and Emanuel Krimplstätter (Keyboards, Synths, Bass) could easily be accredited to a band springing from the suburbs of England or the USA. With acknowledging Austria’s exceptional talent, Steaming Satellites sound so atypically ‚Austrian‘ or at the heart of it, sound nothing like the traditional city of Mozart that they come from, that it‘s hard to believe that they are indeed an Austrian band. But they are not afraid to promote their Austrian heritage. Though their sound steers far from the classical traditions of their home town, the Steaming Satellites give a nod to their Austrian roots with their tongue in cheek title of their well received debut LP ‘Moustache Mozart Affaire‘ released at the beginning of 2011.

Steaming Satellites sound is a meshing of influences from different epochs of the history of guitar-orientate music. The variety of influences navigates a trip through rock from the 70’s to the current era of synths and adds a quality of timelessness to their music that makes them difficult to categorise. Their drive to differentiate their sound coupled with their electrifying and smooth live performances sets them apart from their indie peers. With the opportunity to tour with Portugal the Man (Portland, USA) in 2010, which has continued to be a fruitful relationship for both bands (playing together again in 2011 and 2012) Steaming Satellites were exposed to an entire world outside their bedrooms and beyond the enclaves of Austria. As with all young bands, they refined their sound and polished their live act, moving Steaming Satellites to an international niveau not easily achieved for an Austrian band and in a general climate of similar sounding bands.

And they’ve been gathering international attention from critics and fans for their unique interpretation of Indie guitar-driven music. Steeped in Psychedelic, Avantgarde-Rock and Post-Core influences, Steaming Satellites have one eye to the past and one to the future. With some bumps along the way, inclusive of a slight line-up change (previously a five piece, now a three piece) the band has been building a solid following both locally and internationally, chiefly through tireless touring of their outstanding debut ‘Moustache Mozart Affaire‘.

For Max, Matl and Emanuel, the next era has already begun. Don’t expect another Moustache Mozart Affaire’. Repetition is unlikely. Each track is a small piece of art work that stands alone, has been perfectly crafted and belongs to a curated collection.

Steaming Satellites fans can look forward to getting their hands on ‘Slipstream’ on 15 February 2013.