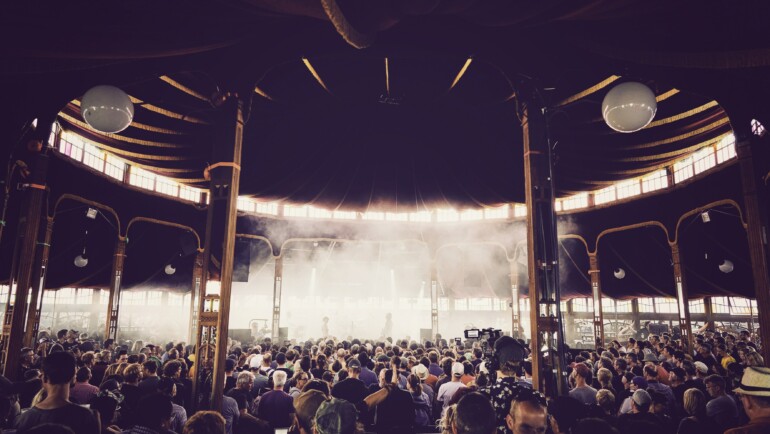 Haldern Pop is an annual open air music festival, first held in 1984 in Germany. From August 8-10, 2019 the small village Haldern welcomes the Haldern Pop festival and its diverse guests. From Austria Soap&Skin and Elektro Guzzi, up-and-comers 5K HD, singer songwriter Felix Kramer, and Thirsty Eyes can be spotted in the line-up. We spoke to the festival director Stefan Reichmann about real values in the pop circus, his ambitions and his point of view on the Austrian music scene.

Haldern Pop is an annual open air music festival, first held in 1984 in Germany. Kaltern Pop took place in 2015 for the very first time in Alto Adige (IT). What is the common history of both festivals Haldern Pop and Kaltern Pop?

Stefan Reichmann: Both festivals stand for music and the surprising elements of music; for the diversity at distinctive venues, supported by village communities who welcome strangers and are open to external influences.

Stefan Reichmann: The actual idea of the festival was watered down by third parties’ economic interests, becoming somewhat arbitrary. Haldern and Kaltern are an alternative concept and perhaps in the broadest sense museums and refuges for both experimental and contemporary music. The Haldern Pop Festival was founded 36 years ago by 14 altar boys, and Kaltern Pop is continued using the experience of Haldern, but the energy of the original founders’ children.

Can you notice any tendencies or changes in the festival market in Germany nowadays?

Stefan Reichmann: The initial enthusiasm to present music you love has become replaced with a calculated economic logic. It’s less and less about one’s own preferences, and more and more about fulfilling expectations –and thus about facilitating effective consumption. It’s become a commodity. Third parties sneak up to the bonfire and use emotional “ovulation” to sell the accessory of youth.

What´s the situation like for festivals – such as Haldern Pop and Kaltern Pop – which also aim to discover unknown acts compared to the festivals featuring only the big headliners?

Stefan Reichmann: It’s still a niche, but on a small scale these festivals will continue to be prominent landmarks in the pop circus. They will never be fast selling or self-sustaining; they will always need courage, attention and passion. The trust that’s been gained generates a history – and that’s where the real value lies.

What is your point of view on Austria´s current music scene? Do you see opportunities for upcoming Austrian artists in Germany in general?

Stefan Reichmann: Austria has maintained a certain peculiarity, and also benefits from not always being in the spotlight. But it has always believed in itself. The Austrian scene is very lively and versatile, has a good sense of humour, and there’s always something unique resonating from the roots of its own history. Experiments are able to thrive before the holy Anglo-American pop-inquisition judges them.

Alongside Soap&Skin and Elektro Guzzi, up-and-comers 5K HD, singer songwriter Felix Kramer, and Thirsty Eyes can all be spotted in the line-up. When did you first get to know these acts?

Stefan Reichmann: Actually, all of them from the get-go – it was only the quality of Elektro Guzzi that took me some time to fully recognize. But this quality doesn’t surprise me; because I believe in the theory that a country’s culture is strongly influenced by people’s personal lives, landscapes and history – and by the freedom to respond forcefully to too much bliss. The natural (geographical) remoteness – or let us call it proximity to Eastern Europe – generates a vast field of energy into which one can stretch optimistically into the bright side of life and social participation. This, in balance with existential boredom, currently gives many bands that strong initial push.

Can you give as a sneak preview for Kaltern Pop too?

Stefan Reichmann: Kaltern Pop will have a very exciting season, because this mix and village are far away from the Pitchfork and Hurricane leagues, bringing things to light that are rarely seen in this combination. Kaltern is a playground for the experimental; a blank sheet of paper, free from expectation, but full of trust in the invited artists.