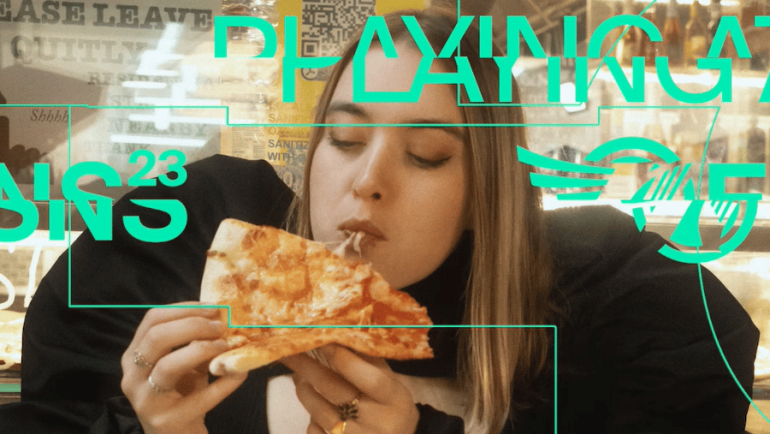 The first artists have just been announced for ESNS 2023 in Groningen! And we are thrilled to tell you that eight of them are from Austria, and one is nominated for the Music Moves Europe Award, presented at the festival! EUROSONIC NOORDERSLAG (ESNS) will once again be the first big event of the music industry in the upcoming year. Taking place from January 18-21, 2023 in Groningen, the Dutch festival features Europe’s most promising up-and-coming artists and gathers the most important stakeholders of the music industry. Every year, Austria has been well represented with a strong selection of emerging artists. So, who’s on board this time? Let’s have a look at the first confirmed artists for ESNS 2023!

Nine Austrian artists have been invited to present themselves at the 2023 festival edition in January. They are: Aze, Doppelfinger, Florence Arman, Good Wilson, OSKA, Takeshi’s Cashew, Toupaz, Uche Yara and Wallners. More good news: OSKA has been nominated for the Music Moves Europe Awards which will be presented at ESNS in front of a live audience. Stay tuned for updates to the lineup and schedule!

Apart they are Beyza and Ezgi, together they form Aze. Since 2020, the Austrian duo provides a nonchalant insight into their inner selves with a mix between sad and sexy topped off with charming, playful lyrics. Be sure to call Hotline Aze, their 2022 debut album that combines facets of RnB, indie and dream pop with sparks of oriental music.

His dark and honest songs reveal a deep admiration for classic folk singer-songwriters – the ones who guided Clemens Bare to his own way to music. Under the moniker Doppelfinger the Austrian started releasing tracks, leading in 2022 to acclaimed debut album ‘by design’. It’s a true folk-project in collaboration with Viennese indie artists like Jakob Herber, Sophie Lindinger, cellist Lukas Lauermann (Soap&Skin), Sophie Löw and OSKA on backing vocals.

Florence Arman is an established singer/songwriter, who has worked with artists like Rhys Lewis, The Kooks, Barns Courtney, G-Flip, Bakermat, filous and Harry Hudson. She was noticed as one of the most promising newcomers thanks to her intimate, yet witty and light-hearted debut EP ‘Out of the Blue’. A collection of songs with honest lyrics and strong melodies that she wrote as a sort of self-therapy over the last few years. Her next 7-track EP is currently in the works.

Good Wilson is a dreamy walk in spring’s first sun rays, marked by easiness, absent-mindedness and sweet-tempered naivety. The Viennese band’s self-invented genre “sky gaze” – dream pop for staring at the sky and letting the mind drift off – describes their vibe perfectly. Moody guitar loops, soulful strings, catchy synths and the smoothness of the pedal steel guitar remind us that life is a game, which shouldn’t be taken too seriously.

OSKA moved to Vienna at 18 to study pop and jazz singing. She started busking in the street, signed to Nettwerk in 2020 and released her debut EP ‘Honeymoon Phase’ to critical acclaim. On her 2022 debut album, ‘My World, My Love, Paris’, OSKA weaves together tales of her family life and the experiences of a young person growing up in this strange world. She made her Great Escape debut in May and is the support for Tom Odell on his European Tour.

Takeshi’s Cashew (Laut&Luise, Berlin) are a new psych-funk group that explore the boundaries of club culture, world music and 70s psychedelia. All coming from different musical directions, these Austrians create a colorful fusion of genres embedded in a club-like beat framework. Their debut album, self-produced in their DIY-studio in Vienna, takes you on a journey into cosmic krautrock, cumbia, afrobeat and disco.

Toupaz is the solo-project of Austrian Timo Bürgler, also known as producer Awo Ojiji and from his activities in the Graz dj duo doze and the disko404 collective. Think of: polyrhythmic patterns, broken beats and atmospheric textures, firmly inspired by the UK bass genres. The style of Toupaz is charactarized by his preferred selection of booming bass, dub chords, cuts from juke and jungle and technoid funk.

UCHE YARA is a 19-year-old artist with Nigerian roots, who grew up in Austria and is now living in Berlin. Her profound songwriting and multi-instrumental skills, plus an energetic live presence with her full band started the rapidly growing hype. Discovered by artists such as Marc Rebillet, Bilderbuch and Parcels, she started touring the first day after she graduated from school. Together with Bilderbuch she recently opened up for The Rolling Stones. All that happened even before her first single release, expected in 2023.

Wallners is a family of four siblings from Vienna – the capital of classical music. Raised by a piano manufacturer they produce mesmerizing songs somewhere in between Rhye, James Blake or Lana Del Rey. The mature sound and exceptional asthetic is held together by the voice of singer Anna Wallner.

For more details on all the international acts, ticketing, lineup, the conference and the festival at large, go to the ESNS official website. Stay tuned for updates as they come. In the meantime, plan your trip, and meet us there!