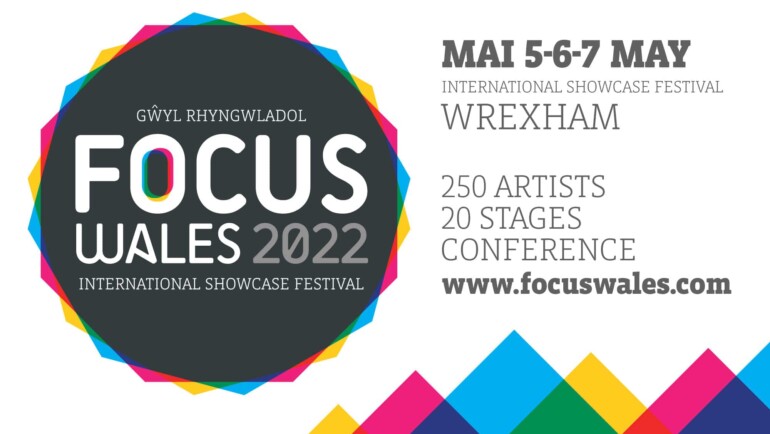 FOCUS WALES is an international multi-venue showcase festival taking place in Wrexham each year, which places the music industry spotlight firmly on the emerging talent that Wales has to offer the world, alongside a selection of the best new acts from across the globe. FOCUS Wales 2022 takes place from May 5th-7th and will mark the festival’s 11th edition, welcoming over 15,000 people and showcasing 250+ artists from across the world. Among them are Austrian acts ATZUR and LAIKKA. During the Focus Wales conference AME will also invite international delegates to a networking reception: ‘Meet The Austrians’ Brunch Mixer Event: Saturday 7th May, 11 -12pm at Ty Pawb!

ATZUR is probably the only Spanish-Austrian duo in the world of indie pop that met on Tinder. With songs written from different places mentally and emotionally, ATZUR dives deep in the extreme feelings, where wild and raw drums meet dramatic and epic melodies. Patricia, who graduated in Fashion Design and is head of her own fashion label, is a fierce frontwoman, with a strong sense of aesthetics that flawlessly unites music with fashion. Paul, on the other hand, is a renowned drummer in the Austrian indie scene, having played for bands such as Cari Cari and At Pavillon. Together, the duo creates a sound that lives between north and south, warm and raw, free and epic.

Founded in Spring 2019, the band signed a record deal with the austrian label Seayou Records and released their first single “Running”. With a video produced in Spain, the single quickly entered the charts of Austria’s Radio FM4 and Germany’s EGOfm and stayed there for several weeks. With their debut EP “Flesh, Blood, Bones” they presented themselves for the first time in 2019 at the Waves Vienna and Reeperbahn Festival. The pandemic was clearly a challenge for the young duo, but still they played at festivals like Poolbar, Future Echoes, Reeperbahn (for the second time again in 2021) and the online versions of Live at Heart and Liverpool Sound City. They have been internationally supported by their #INEStalent nomination. No matter the stage – ATZUR has the capacity to successfully deliver a fresh performance in any size of venue.

The duo steps into the future with a new EP. “Big Delirium” will be out in May, giving us a taste in March with the single “Do you feel the same?”. A song about falling for someone and the excitement and adrenaline that the other person may feel the same and how it scares the shit out of you. Upbeat, energetic with indietronica vibes, it’s a great soundtrack for you to put your headphones on, close your eyes and dance around your bedroom.

When a new band is already surrounded by a certain hype, even before they have released their debut album, you know that something special is going on. Magical, mysterious and fascinating are just some of the terms that come up when talking about Laikka.

A duo that puts equal emphasis on both visual aesthetics and music, pushing into the international spotlight with an exciting mix of experimental soundscapes, dreamy vocals and electronic beats. Rather loosely and coincidentally, the band’s name is reminiscent of the first living creature to make space history – and yet it’s also somewhat programmatic.

Founded at the beginning of 2020, Laikka deals with the big issues of our time, both musically and in terms of content, right from the start. A deep, melancholic look inside, strong emotions, the feeling of loneliness, diffuse fears, or even boredom in the digital age are often juxtaposed with their own big dreams. The overall appearance of the band is influenced by a digital aesthetic – with preference Laikka also blur the boundaries between music and art world with their visual works.

After the internationally acclaimed singles “The Answer” and “Dissolving”, Laikka presented a great and true electronic pop gem with their album debut “Morning Glow” in October 2021. As with Laikka’s previous works, the album’s content is about breaking out of rigid, pre-fixed structures and diving into one’s own vulnerability. Compelling and fascinating how the duo thereby mixes dreamy pop, experimental electronics and dark techno into a unity.

The release of their powerful audiovisual artwork “Grey Edge (Unfolded Version)” will follow in early 2022, and a limited edition vinyl version of their debut album “Morning Glow” will be available from March.

During the Focus Wales conference AME will invite international delegates to a networking reception:

Austrian delegates wishing to participate at Focus Wales can get a 50% discount on delegate passes: In partnership with Focus Wales Festival, Austrian Music Export has arranged a special 50% rate for Austrian delegates. To obtain your ticket discount code, please send us an email to office@musicexport.at until April 25th.

As well as entry to all FOCUS Wales festival events, Delegate Priority Passes include:

– Full badged accreditation for the festival 4th-7th May – Profile on FOCUS Wales website
– Profile on FOCUS Wales mobile app
– Access to online delegate networking area
– Profile on online delegate networking area
– Consideration for participation in panels and 1 to 1 meetings
– Priority access to all live shows (subject to venue capacity)
– RSVP evites to ALL official events / mixers / parties etc
– Invite to exclusive delegate only opening party on 4th May
– Invite to exclusive delegate only closing party on 7th May (until late)
– Access to all Music, Digital and Film sessions during the interactive conference

FOCUS Wales is a not-for-profit organization, established to provide the annual new music showcase event for the Welsh Music Industry. The core work centers around the delivery of our international multi-venue showcase festival taking place in Wrexham each year, which places the music industry spotlight firmly on the emerging talent that Wales has to offer the world, alongside a selection of the best new acts from across the globe.

FOCUS Wales 2022 will mark the festival’s 11th edition, and will welcome over 15,000 people to the town, building upon 2021’s record attendance across a jam-packed weekend of events. There’s no place like Wrexham during FOCUS Wales, as we showcase 250+ artists from across the world, fill out a variety of spaces and music venues, using 20 stages, and hosting a full schedule of interactive industry sessions, arts events, and film screenings, throughout the festival. In addition to the delivery of the FOCUS Wales festival, we also deliver a number of international FOCUS Wales events throughout the year.