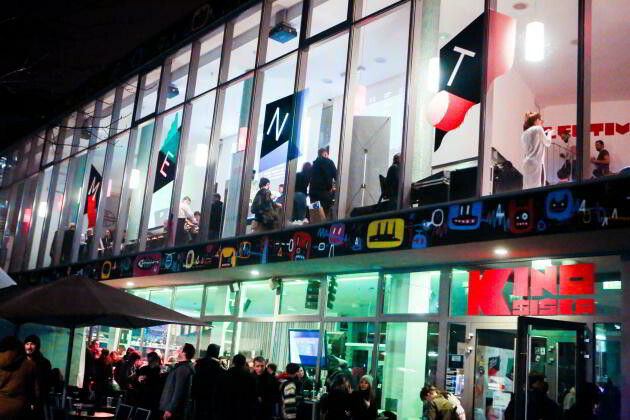 MENT Ljubljana is a three-day showcase festival of fresh artists from all of Europe and beyond, during which around 70 acts perform at different venues in Ljubljana. The international conference focuses on the music industry and creativity. This year MENT Ljubljana is taking place from January 30 until February 2, 2019. Thanks to a long-standing cooperation with Waves Vienna and Austrian Music Export, Austrian musicians are able to present themselves at MENT Ljubljana every year next to a large number of bands from Eastern Europe.
In 2019, live acts from Austria are the indie/post-punk band Tents, the “survival pop” duo Mickey and the trio Schmieds Puls, that formed around the singer, guitarist, and songwriter Mira Lu Kovacs. In addition to their live set, Jerobeam Fenderson & Hansi3D will also be present with an installation and a workshop. It is a chance for them to perform live in front of a good part of the important figures from the European music industry, including delegates from the press, promotion, booking and management.

“Oscilloscope Music” is an audio-visual project where the visuals are drawn by the music’s own soundwaves. In order to get the closest possible correlation between image and sound, the same signal that is connected to the left and right speakers is also connected to an analogue oscilloscope’s X and Y inputs, producing Lissajous figures and complex 3D graphics. Over the span of five years, Jerobeam Fenderson and Hansi3D have created ever more elaborate techniques to explore this largely uncharted field of audio-visual music. Their live set will include new material from their upcoming EP. (Coproduction: Projekt Atol Institute)

Mickey, who call their sound survival-pop, first showcased in spring 2018 at Sharpe (SK) followed by open-air concerts at Vienna´s Donaukanaltreiben. The duo then has been nominated for the 2nd XA Music Export Award and performed a well received gig at WAVES VIENNA 2018. “You can see the guys don’t take themselves too seriously, but they definitely do so with their music”, stated Ákos Remetei (Sziget Festival; HU) after their showcase. For Ment Ljubljana, Mickey will bring their unique mixture of fun, professionalism and a spirit of constantly overcoming ones own limitations. Mickey are definitely a band meant to be live on stage.

Schmieds Puls stand for a virtuoso blend of instrument and voice offset by the extreme directness of its narration. In fall 2018, Schmieds Puls released their album “Manic Acid Love”, right after they premiered at the Int. Jazzfestival Saalfelden. Press and media called it the band´s “loudest” album. But it’s not loud because of crackling instruments, it’s loudness lies especially in its lyrics. The astonishing thing about Schmieds Puls is that the trio knows how to turn the vocals of singer Mira Kovacs into an instrument that forms a symbiosis with the other instruments. Visitors of Ment Ljubljana 2018 could already get an impression of the outstanding presence of Mira Lu Kovacs, when showcasing with her other band 5K HD.

Tents released their first full-length album “Stars On The GPS Sky” (Numavi Records) on LP, CD and cassette in May 2018. Scenesters and the press quickly got excited about their unique musical style. Tents already showcased at the famous Reeperbahn Festival and at Monkey Week in Sevilla. Their songs are partly carried by organ textures and partly cut by post punk guitars. Repetitive drums and bass complement the voice, which follows form and sound and is orbiting minimal collages of text.

During the two-day open lab, Jerobeam Fenderson and Hansi Raber will explain the basics of vector synthesis while providing hands-on instructions with a set of basic oscilloscope music hardware: an oscilloscope, a laptop and a sound card. The artists will display different custom-made software tools to support the making of such music, and explain some of the tricks they use to achieve the visuals and sound they want. You can drop by at any time to get a hands-on introduction to the topic and nerd out about how cool analogue oscilloscopes are!