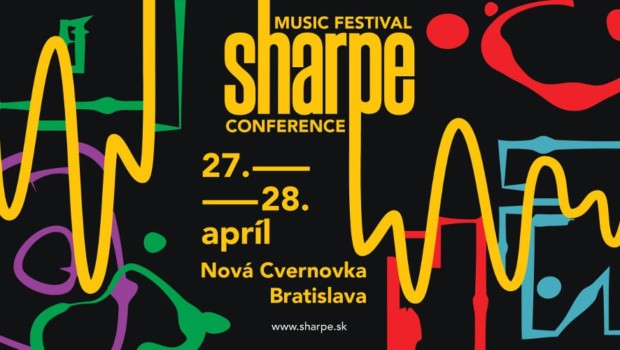 The concept of showcase festival and music conference returns back to Bratislava under the name SHARPE. The festival will be held in the cultural space Nova Cvernovka from 27 to 28 April 2018 hosting more than 25 performances on 6 stages.

SHARPE will have plenty to offer to music fans including open-air performances or club and “unplugged” sessions. Austria will be represented by Ankathie Koi and Mickey. The conference part offers the possibility to attend lectures and panels or participate at workshops and speed meetings with music professionals from Slovakia, Czech Republic, Poland, Netherlands, UK, Luxembourg, France, Italy and other countries.

SHARPE conference is strongly oriented on connecting foreign music delegates with local festivals and the active and forward-thinking cultural centers from all Slovak regions. Among other conference events, you can also pick to be part of the drumming workshop with an acclaimed Italian producer and musician Andrea Belfi.
The full programme of the conference can be found here.

If you are interested in taking part and meeting the representatives of Slovak music organizations please get in touch with us: office@musicexport.at

Ankathie Koi began her career in Pop music after a classic education in jazz vocals. Although born in Bavaria she has been making waves in the Austrian music scene for quite some time. Now she counts as one of Austria’s most impressive female voices. But it isn’t just her vocal acrobatics that has grabbed everyone’s attention. Her almost gender-fluid stage persona drags the audience out of their comfortzone. Combined with her unbelievingly vivid and otherworldly voice, the end result can send shivers down your spine. Her debut album “I Hate The Way You Chew” (Seayou Records // produced by Beni Brachtel & techno-legend Patrick Pulsinger) is pretty spectacular proof of what she is capable of.

Mickey was born in the fresh meadows and on the dusty streets of Uhliska (SK), playing around with those first tracks, without taking any of them too seriously.
Mobile phone recordings of the piano in the house of a great-aunt are mixed over some amateur beats of a 2009 laptop. The lyrics being a mixture of clickbait and advertising slogans from the internet and from what happened yesterday or will happen tomorrow. Limitation as a creative response to infinite digital possibilities. The minimal as an artistic reaction to the abundant. The instantaneous and the trivial as the starting point instead of that one big idea.
Sketches and spur of the moment decisions, are the impulses for Mickey’s music, that, in spite of the sometimes melancholic lyrics, sprays a surprising positive energy all over the place… This is what we call Survival-Pop.