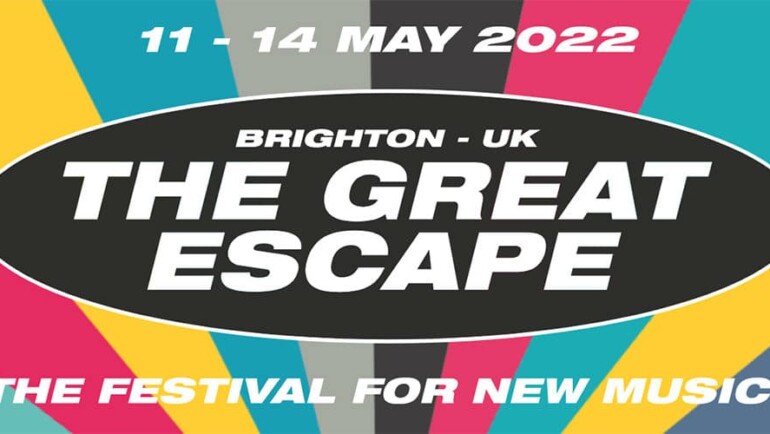 THE GREAT ESCAPE (TGE) is returning this year, taking place in 30+ venues across Brighton from 11th – 14th May 2022. The belated 15th birthday edition of the festival will once again introduce a cutting-edge line up of both brand new and established artists from all over the world to celebrate new music discovery. Among the stellar international lineup are Austrian acts, Alicia Edelweiss, Florence Arman, OSKA and Sofie.

In partnership with The Great Escape Festival, Austrian Music Export has arranged special rates for Austrian delegates for hotel bookings and delegate passes. Delegate passes at a discounted rate are available here to purchase. The festival´s official partner hotels, Jury’s Inn Waterfront and Queens Hotel are now on sale, click here to book.

The yearly Austrian Heartbeats Matinee Showcase at TGE will take place on Thursday 12th May 2022, 12 pm – 4 pm, at Latest Music Bar. Discover a powerful line up of up-and-coming female artists from Austria, mix and mingle with members of the Austrian music business, meet old & new friends and enjoy some drinks with us!

Alicia Edelweiss is an Austro-British singer-songwriter, multi-intrumentalist and artist based in Vienna. She began her musical career as a teenage street musician, hitchhiking all over Europe for two years. Regarded as one of Austria’s most exciting new voices, Alicia’s music lies somewhere between chamber pop and weird folk. Poetry, quirky humour and an avowal to the mythical and dreamlike, interwoven with delight in unbridled emotion, are carried by a voice that ranges from otherworldly siren to graveside dirge. Her first studio album “When I’m enlightened, everything will be better” came out in 2019 and has led her to numerous festivals across Europe.

The rising singer-songwriter’s disarming humour and honesty go hand in hand with her bittersweet take on pop: deep, literate, real, playful, devastating and affirming all at once – inspired by dark times, but bringing a little bit of light. Her songs have a knack of cutting straight to the core of the coming of age experience of love, rejection, identity, confusion and all the rest. Plus, you relate because their solid-gold tunes are written with pure musicality and respect for thoroughbred song craftsmanship.

Her path was inevitable really. Born into a family where both parents and all of her grandparents were musicians, their rule was that if you were old enough to hold a crayon then you were old enough to learn your first instrument. She was playing violin at age four. Of her 63 cousins, most of them are in music. One of her brothers is a jazz guitarist with “the fastest fingers in Europe” and the other is a songwriter and “the best producer in the world”. Music’s in her DNA.

Born in Palo Alto with Austrian and Iranian roots, Sofie is a classically trained instrumentalist, playing the violin and viola since she was four, as well as self taught on the piano. Her songs draw on an unexpected range of influences: French chanson, cult experimental musician Gary Wilson, ‘60s pop ballads. In 2021, Sofie was nominated for a Radio FM4 Award at the annual Austrian “Amadeus Austrian Music Awards”.

At the age of 18, OSKA moved to Vienna and started busking in streets and squares of the capital while also studying pop and jazz singing. In January 2021 she released her debut EP “Honeymoon Phase” to critical acclaim and have amassed millions of streams, won her the XA Music Export Award at Waves Vienna Festival 2020 and a nomination for the Anchor Award at the Reeperbahn Festival 2021. Now in 2022, OSKA is proud to release her debut full-length album “My world, My love, Paris” which is a snapshot of a young woman attempting to make sense of getting older in an increasingly uncertain era. OSKA creates an inviting world of bright melodies, grooving rhythms, and poetic, storytelling lyrics.

The belated 15th birthday edition of the TGE will once again present a cutting-edge line up of both brand new and established artists from all over the world to celebrate new music discovery. Kicking off the UK festival season, TGE transforms the bustling seaside town of Brighton & Hove into a new music mecca for 450+ artists, 16,500 festival goers and 4,000 international music industry delegates, leading as the UK’s biggest music showcase. In addition to discovering the latest talent from across the genre spectrum, TGE also programmes a series of conferences and conventions with key industry figures, featuring insightful panels, topical debates, keynote speeches and networking opportunities.

TGE is renowned internationally as the very best place to discover new artists and see them in an intimate setting before they go on to play bigger venues and festivals later in the season. Previous artists who have performed at The Great Escape include Adele, Stormzy, Ed Sheeran, HAIM, AJ Tracey, Skepta, Dave, Charli XCX, Wolf Alice, Aitch, Foals, Loyle Carner, Rag ‘n’ Bone Man, Bon Iver, Lewis Capaldi and many more of today’s celebrated artists gracing intimate stages early on in their career, creating memorable moments for all in attendance.