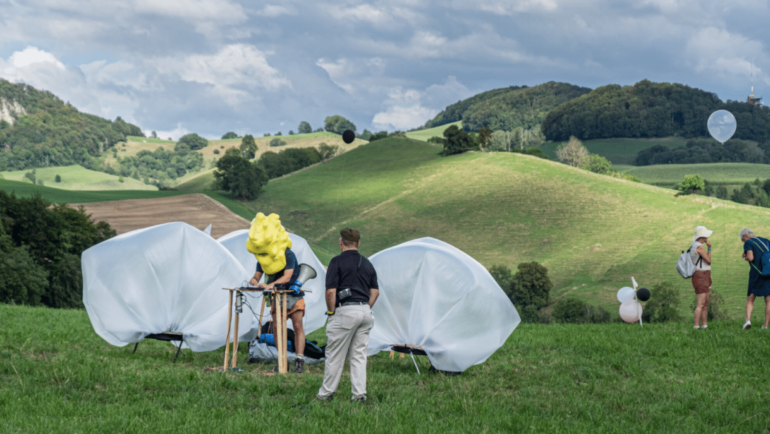 For the 31st time the new music festival Rümlingen will take place between the 16th and 19th of September. It is one of the most intimate and most unusual music festivals in Switzerland. All concerts take place outside. In 2021, the festival will again be primarily a festival of world premieres.

“I sit there as if I were not there”: Robert Walser and the music

This year’s programming is inspired by and thematically centered around the German-speaking Swiss writer Robert Walser (15 April 1878 – 25 December 1956).

Austrian Artists at the Festival 2021

This year’s Rümlingen Festival features a great many of world-class new music composers and performers. Among them are a number of Austrian or Austria-based composers worth mentioning.

Cordula Bürgi studied violin with Daniel Dodds at the Lucerne School of Music, conducting with Raphael Immoos, singing with Hansjürg Rickenbacher and “Schulmusik II” at the Basel School of Music. She continued vocal studies with Douglas Hines (Vienna) and Gregorian performance practice with Cornelius Pouderoijen (Vienna). From 1999 to 2014 she was the choir director at the Mädchenkantorei Basel, taking over the overall direction there in 2008. Choral studies at the Theater Basel, with the SWR Vokalensemble as well as with the Basler Madrigalisten; musical assistance at the Opera Graz (Opern der Zukunft); at the Staatsoper Berlin rehearsal of the opera Violetter Schnee (premiere 2019). In 2016 she founded the professional vocal ensemble Cantando Admont, which combines early and new music, spanning many centuries of vocal music history.

Born in Upper Austria in 1964, Herndler studied organ, electro-acoustics and composition at the Vienna University of Music. The latter with Roman Haubenstock-Ramati, whose graphic notation practice had a formative effect on Herndler’s own musical compositional exploration. This was followed by study visits to the USA, to the Center for Computer Research in Music and Acoustics at Standford University and to the Department for Visual Arts at the University of California, San Diego. Herndler was a member of the Klangforum Wien until 1992. Since 1994 he has been a member of the artists’ association MAERZ. In 1997 Herndler founded the ensemble EIS, with which he has since realized many of his intermedia projects. The basis of this work are Herndler’s intermedial scores, which he understands as graphic interpretations of an underlying idea that allows for different realizations, thus not exclusively musical, but also cinematic or choreographic.

Carola Bauckholt was born in Krefeld, Germany, in 1959. She studied composition at the Musikhochschule Köln with Mauricio Kagel (1978 – 1984). She founded the Thürmchen Verlag (music publisher) along with Caspar Johannes Walter in 1985, and six years later they founded the Thürmchen Ensemble. She has received numerous residencies and prizes such as: in 1998 she was designated the Artist of the Year by the State of North Rhine Westphalia, and she was selected to represent Germany at the World Music Days in Mexico City 1992, Copenhagen 1996, Seoul 1997 and in Zurich 2004. She was awarded the German Composers Prize from the GEMA in the category of experimental music in 2010. From London International Animation Festival 2019 she received the “Best Sound Design Award” for “The Flounder” in collaboration with Elizabeth Hobbs and Klangforum Wien. For 2021 she has been invited to a three-month stay at the Villa Aurora in Los Angeles. In 2015, she was appointed as professor of composition with focus on contemporary music theater at the Anton Bruckner Privatuniversität in Linz, Austria.

A central theme of Bauckholt’s work is the examination of the phenomena of perception and understanding. Her compositions often blur the boundaries between visual arts, musical theater and concert music. She is especially fond of using noisy sounds, which are often produced by unconventional means (such as extended instrumental techniques or bringing everyday objects to the concert hall). It is important to note that these noises are not just part of some kind of a predetermined compositional structure, but rather they are carefully studied and left free to unfold and develop at their own pace lending the compositions their own unique rhythm.

For the full program, go to the festival website.