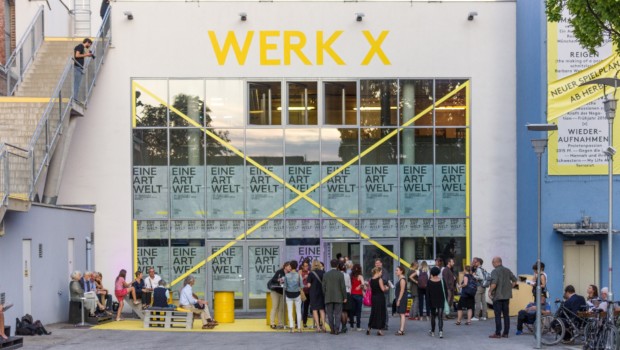 What is „music theatre“? What is the relation between music, spoken word and other media? Are spoken words important at all? If not, will this still be „music theater“? Contemporary music theatre productions question these issues, often in very different artistic and human ways.

The legend “Bird Talk”, based on a story by Farid Nischapuri Attar, tells of a dangerous and difficult journey of birds through seven valleys in order to get to their true king Simurgh (thirty birds). Finally they recognize their own identity.

Two soloists, a vocal ensemble and seven instrumentalists play in several rooms. The audience walks through these rooms and remains at different places. A narrator, reciting texts, tells the story that goes along with the music, which refers to baroque aesthetics. This represents the philosophical-religious aspects of history, which describes a human being as a hiker on his path on different levels.

The Fifth Cardinal Direction – in German “Die fünfte Himmelsrichtung” – can be found in ancient Asian-, Native American- and Indo-European cultures. It represents the center, the here and now, the inner self. Based on this knowledge, this composition is an introspective journey to the inner self and its transformations during a person’s lifetime: birth, maturity, love, work and creation, (self)destruction and re-birth. The two composers – also known as Duo Siedl/Cao – have been inspired by symbolism, rituals and music of the ethnic minorities of North Vietnam and expanded their artistic language by the means of contemporary expression. The fact that the canto is based on a fantasy language enhances the conceptual intention so that the audience can focus on the musicality and the expressiveness of the language rather than on the meaning of the text.

In 1963, the Austrian author Marlen Haushofer creates an extraordinary situation in her novel “Die Wand” (“The Wall”): All of a sudden, a woman finds herself completely isolated from the rest of the world while in the mountains. The border is an invisible wall. In the tradition of fantastic realism, the novel goes beyond the story. “Die Wand” is also about the inner emigration of an author who lived her real life in literature. It was only after Marlen Haushofer’s early death and through the help of research on women’s literature in the 1980s that the thought-experiment „Die Wand“ gained popularity and acceptance among literary critics.
Composer Christian Diendorfer, born 1957 and based in Vienna, was commissioned by the Landestheater Linz to write the score for “Die Wand”. In the chamber opera the protagonist´s role is divided among a singer, dancer and an actress.

In cooperation with artists from aXe Graz and young refugees, “La Strada” brings an opera onto the streets: “L’énfant qui grandissait démesurément” is set in the heart of a housing complex. The libretto was written by the Congolese author Fiston Mwanza Mujila. It is about a society which is becoming more and more alienated. A society, saturated with consumption.
For this music theatre piece, composer Patrick Dunst combines two opera voices with ambient noises and acoustic chamber music ensemble sound. “L’énfant qui grandissait démesurément” is an interactive play of street art to get some dynamic and movement into the audience.
Links: Patrick Dunst, La Strada

In DINGEN choreographer Paul Wenninger and composer Peter Jakober follow the trail of an archaeological find: of a chordophone – an “enormous string instrument” – that was discovered during an excavation in 1835 in Aksum, present-day Ethiopia. A few sketches and ancestral history describe the form and use of this musical instrument, which was played exclusively by two men and is said to bring divine, love and purity. For DINGEN, the two artists have reconstructed the instrument using present-day materials in order to stage it in a situation between concert and performance in various structural conditions, and from the perspective of various artistic positions. The especially for the instrument written composition, performance, spatial acoustics and choreography mutually influence, generate and condition one another in a work with archaeological traces that develops with and through the body.
Composition: Peter Jakober | Choreographie: Paul Wenninger |Performer: Raul Maia, Raphaël Michon | Construction of the Instrument: Jakober / Krenmayr / Wenninger
Links: Peter Jakober, Kabinett ad Co

DINGEN from Paul Wenninger on Vimeo.

The opera in Japanese language is an attempt to display human solitude through the encounter with the shadow: we cannot overcome our existential loneliness but can only try to accept it. “Lob des Schattens“ (Praise of the Shadow) was inspired by Jun‘ichirō Tanizaki’s essay with the same title. The story: five archetypical solitudes arise above a continuously changing static sound to overlap more and more, and to allegedly build a community in order to overcome their unwanted solitude. A process which comes to a sudden stagnancy as the white „Shadow“ appears to dissolve the community.
Links: Oscar Jockel

“A Sensorium” is an interdisciplinary work created by three young artists – Emre Sihan Kaleli (composer), Luz Lassizuk (director), and Yolanda Uriz Elizalde (multi–sensorial artist) in collaboration with “Ensemble Modelo62”. It represents the second phase of an artistic partnership project between “Ensemble Modelo62” and Emre Sihan Kaleli, which took place in 2014 and 2016, and was realized with” financial support by The Performing Arts Fund NL.
The central idea of “A Sensorium” is to create a work of abstract music theatre, based on sound, light, and physical gestures of musicians. The piece also includes such complementary elements such as video projection and scent. Instead of presenting a story, the artists aim to point at and develop theatrical qualities which are inherent in these elements. For instance, the musician’s physical gestures playing their instruments are emphasized by various settings of light and excessive gesticulation of the performers. The piece also explores connections between sound and light, and their opposites – silence and darkness. Make sound visible through light, and the light audible through sound.
Composition: Emre Sihan Kaleli; Director: Luz Lassizu; Yolanda Uriz Elizalde: multi-sensorial art;
Ensemble Modelo62
Links: http://emresihankaleli.com/

In “the beautiful square”, composer Klaus Lang and media artist Sabine Maier are trying to create a microscopy of music theatre: a space-sound composition that always deprives of one of the senses in order to deepen and sharpen one another. With veiled eyes, the audience listens and perceives hazy light changes. Watching the room and the musicians playing soundlessly, the only acoustic impressions are random noises and micro fragments of sound caused by the playing movement. Aspects of contemporary music, composition and fine arts initiate a dialogue without overlapping the interpretations and intellectual backgrounds of the other individual.

A woman remembers. Countless stories of violence, censorship and the lack of love erupt in a stream of consciousness. “MUNDTOT” is based on a prose fragment in which a litany of never-ending infanticide cases spill forth. Speechlessness transforms into physical aspects of speech, where the fundamental questions of ‘why, how and when to speak or sing’ determines the relationship between language, voice and body. This defines the conception of the instrumental parts of “MUNDTOT”. As language becomes a corporeal and tonal sign, the „presence of the voice“ is the genuine protagonist of the musical drama.

“Rynok” was commissioned by Max Brand Ensemble in 2017 and represents a composition that unfolds between improvisation, video, context, content and its presentation. The score was created in the tradition of graphic notation but using animations instead of graphics.
The work lies on two quotations: “A day will come when the only fields of battle will be markets” (V. Hugo) and “Europe is not a market” (E. Gonzalez, EU-Parliament). This unfolds through its presentation on visual levels and is simultaneously reflected by the musicians and soloists.