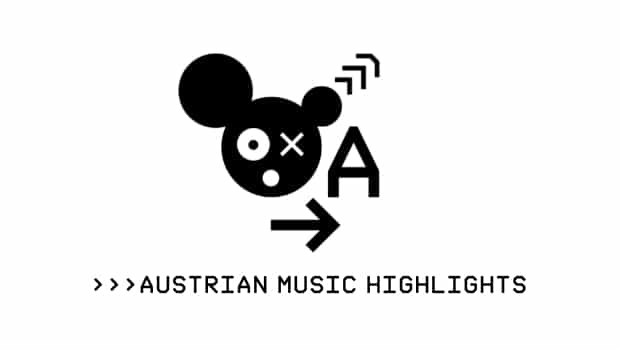 Pinch us, is it real? Live music? Live audiences? Together again? Indeed, hopes and reality have converged at last! While temperatures are rising, restrictions are declining. And the effect on music and art? Nothing less than an avalanche of events pouring down from mountains of pent-up creativity, landing blissfully on a culturally-starved population of eager audience members. The number of events popping up all around is hard to keep up with, so it’s highly recommendable to continuously check your favorite artists’ and venues’ announcements. However, for a start, here are a few highlights happening in Austria in the coming days and weeks.

To the international film community’s delight, the renowned film festival DIAGONALE has given the green light for its in-person festivities in Graz this June. Besides the plethora of popcorn-pairing content, there is, as well, a top-notch music program accompanying the cinematic journey, with two Music Video Programs. On Friday, June 11th, one can experience Johannes Gierlinger’s first feature-length film “The Fortune You Seek is in Another Cookie” for the first time in a live re-montage set to music. The musical cast is just as promising as the grainy, wanderlust-inducing film images, and is made up of Isabella Forciniti, Lukas König, Peter Kutin, Karolina Preuschl and David Schweighart, with narrator, Anat Stainberg. The film is a travel film in search of happiness in the form of a poetic and political exercise. On Saturday, June 12th, DORIAN CONCEPT – keyboardist, producer and composer, whose experimental electronic music is influenced by jazz, funk, hip-hop, ambient – will present a live AV performance with PRCLS, intertwining the club with the cinema; electronic beats with the screen.

With LEO RIEGLER’S new composition for the Ensemble for Contemporary Music Zurich (ENMZ), entitled, “Vasectomy”, we hardly know what to expect, because with this artist, having expectations is usually in vain. His boundless creativity and unique meshing of humor, sociopolitical critique, and serious musicality with uninhibited inventiveness tends to surprise, amaze and inspire the audiences who encounter him. What we do know is that in this latest collaboration between Riegler and ENMZ, free improvisations (sung and played on the piano), in the tradition of the Second Viennese School, are transcribed, arranged and performed with the ensemble. The project falls under the concept, “concert video opera”, in which composition, libretto, stage design and live video culminate into a performance. The theme revolves around the vasectomy, emblematic of cutting off prevailing capitalist, fascist and patriarchal power structures. The piece will be premiered on June 9th and 10th at Kunstraum Walcheturm in Zürich, before moving east to Riegler’s hometown for its Vienna debuts on June 12th and 13th at echoraum. To tie in with the opulence of an opera production, the ensemble is reinforced by Billy Roisz, Dieb13, Christian Weber, David Meier and Christine Gnigler, bringing an uplifting depth to the composition with their improvisational, electronic, baroque, video skills.

A cinematic achievement produced by KLANGFORUM WIEN: animated films with new music and positions on sustainability, the future of man and a healthy economy. Under the dictum “Happiness – Seriousness A Counterpoint” Klangforum Wien and other artists from various backgrounds have come together to create a program in five chapters and an epilogue around the “eternal struggle between greed and compassion, profit-seeking and public spirit. A highly topical and at the same time ancient problem – voice artist David Moss illuminates it by means of relevant texts from antiquity to the present. A counterpoint is provided by short poetic meditations that cannot be pigeonholed and remind us of the intrinsic life of things beyond all purpose.” If that wasn’t enough, five short films on the theme specially commissioned by the ensemble, a tightrope walker and, of course, new music are included in this extraordinary undertaking, both practically and thematically. EIGHT BRIDGES. Happiness Seriousness – A Counterpoint can be seen on philharmonie.tv and in the EIGHT BRIDGES media library.

It’s a bit of challenge to not love the music of WILLI LANDL. The singer and songwriter puts it best himself: “I master my life with a smile and drops of heart”, which is precisely what one feels in the presence of him and his songs. That’s why the appearance of his fourth album, “Abstruse Gestalten” (“Abstruse Forms”) coming out on June 18th on Wohnzimmer Records is warmly and excitedly welcomed. The album is a reduced form of his normal set up – just piano and voice – together with his long-term co-musician and keys-virtuoso, MICHAEL HORNEK. As Wohnzimmer Records puts it: “Willi Landl doesn’t write lyrics that go in with one ear, out with the other, and love appears somewhere in the chorus in between. He is an exaggerator, exaggerator and compressor and can not only sing words like Hosenboden (crotch-seam), Käseigel (cheese and pretzel porcupine edible sculpture) or Nagellacksäufer (nail polish chugger), but address them poetically. Michael Hornek has the gift of immersing himself in pieces at least as much in harmony as in madness. His keyboard switches between Brecht, Hollywood, Zappa, Schubert, Dracula, jazz and deconstruction massacre. The instrumental and textual statements of this duo are unmistakable.” Look out for “Abstruse Gestalten” coming out June 18th, or, even better, attend the album release concert on the same day, as part of the We are Vienna Festival 2021 at 8pm (CET), with Millycent as the opener at 7pm (CET).

Is there a more synonymous word with ‘summer’ than ‘lazy’? For most of us, it’s the moment to let go, to loosen the collar, unbutton the top button, go limp, go wild. At least that’s the ideal, if not the reality. Playing with precisely these paradoxes and juxtapositions, NNOA’S first single “Lazy” tells the story of relatable inner conflicts and questions. It’s sweet, strong, human, groovy and booty-swaying. All the ingredients of a summer hit.

echoraum (Vienna) has never been known for stagnation. In contrast, it has always ebbed and flowed, moving with the signs of the times. In that same spirit, it found its own unique way of adapting to the challenging historical moment it found itself in, and in Spring 2021, shifted itself from a live music venue to a sound gallery with its exhibition series, Tonträgerinnen*. The concept has been to display documentations of works, as well as sound installations of some of the most active experimental artists of the current music scene in Vienna and Graz. The last of its kind for now, is opening on June 7th, and will present SLOBODAN KAJKUT (God Records) and his installation entitled, “20 Inventionen (for 20 record players in a room)”. The cyclic work, consisting of twenty short piano pieces, is inherently interactive, inviting visitors to manipulate the object as they please. Each of the twenty portable turntables in the installation represents one music station, and each station represents one piece – one invention – on one side of a 7-inch record. Entering the space, the visitor has the freedom to shift from station to station, and play the turntables in any order. The installation object can be experienced till July 22nd at echoraum.

KOENIG, the solo project of Lukas König, has released a new video as a teaser for the upcoming album “Buffering Synapses” being released on the English independent record label, Opal Tapes in July. The sequel to “Messing” and continuation of Koenig’s signature reduced-form, experimental, noisy single-cymbal endeavor, will be Koenig’s first release on Opal Tapes, located in Newcastle, renowned for its releases of abstracted forms of house music, techno, and other types of electronic music. The English label is well known for releasing its music on cassettes, which is the form “Buffering Synapses” will take, in addition to the digital version. Filmed in 16mm format by artist Lydia Nsiah, mixed and mastered by Nik Hummer and expanded by analogue modular laser artist BR Laser, the first single “Holography” can be heard and viewed in all of its strange and beautiful glory.

Live techno trio extraordinaire ELEKTRO GUZZI has recorded a new album with the title “TRIP”. On this particular trip, the first pit stop will be June 7th, for their album presentation at the illustrious Radiokulturhaus theater in Vienna. Fuel up with driving beats and a powerful performance concept, at the live and in-person concert showcasing their unique techno dance music with the instrumentation of a rock band. With a new focus on real-time interaction of the instruments, the three musicians developed new recording techniques, making the tracks on the new album sound even more direct, thereby inching closer to the sound and energy of the live concerts. For their their first trio album since 2017, Elektro Guzzi return to their core competence of creating driving techno on the spot. Through their impulsive interplay and the heavy use of effect circuits they create an energetic and unique form of dance music. TRIP will be the first vinyl release on their very own Palazzo imprint and might be the purest Elektro Guzzi record so far.

If ever you’ve been meandering through the center of Vienna, and pass by the arts and culture hotspot – Museumsquartier (MQ Wien) – you probably have noticed the TONSPUR passage sound installation floating through one of the alcoves of the historical structure. The TONSPUR series has been presenting sound works by international artists for nearly 20 years in the public space of the MQ and at other locations around the globe. Their multi-channel compositions, which expand the usual stereo image, generate captivating sound architectures and walk-through soundscapes. TONSPUR passage – Micro Museum for Sound – has released its latest episode: TONSPUR 88: Unrevealed by cutting-edge experimental composers and musicians Angélica Castelló und Burkhard Stangl, on-listen from May 31st to September 18th at Q21 in MQW. Angélica and Burkhard have been partners in life and art for a long time. ‘They say: The longer you live together, the more mysterious the other becomes – in love, as well as in art. For this project, the two artists try to reveal sound secrets for the other, but in the hope that they will never succeed in revealing them, as their mutual lack of understanding unites everything they understand about each other. The eight loudspeakers of the TONSPUR passage are played with eight sound events, in an even split – four from Castelló, and four from Stangl. The respective sounds occur simultaneously, relentlessly creeping up on each other, constantly shifting in space, never congruent, but always in communication, nevertheless. A sound image that is irrevocably unique in its constant impermanence’. (Tonspur)

Vienna’s iconic underground club FLUC didn’t waste a second from the moment the lockdown ended, boldly hitting the ground running with its “Wiedada” concert series from June to July. Some highlights of the mini-festival include DORIAN CONCEPT (Affine Records/Brainfeeder/Ninja Tune) on June 7th, two nights of ZINN and DOWNERS & MILK June 18th-19th and MYNTH on July 7th. Admittedly, the concert-going experience may be different to that of the pre-corona times, given restrictions like seated audience and lower capacity. Perhaps the space for mental concentration and leg stretching will have positive effects in the live-music-consuming-experience? Or maybe the restrictions will loosen again, just in time? Either way, we’re pretty certain it’s worth it.

Another highlight of the “Wiedada” program, is the post punk noise jazz duo BOSNA, celebrating the release of their debut album YOU KNOW TOO MUCH (Nuvami Records) at FLUC on June 17th. “Hibernation” is the first single of the album, made up of beguiling guitar riffs, entrancing loops, and the melancholic vocals of Pete Prison IV and Sticky Lenz interlaced over a rough percussive backbone, culminating in one thick melodic entity. The duo mingles jazzy beats with noisy arrangements, which are then disrupted by wistful episodes, and back again. This uniquely positioned new band is keeping us at the edge of our seats to hear what the rest of the album sounds like.