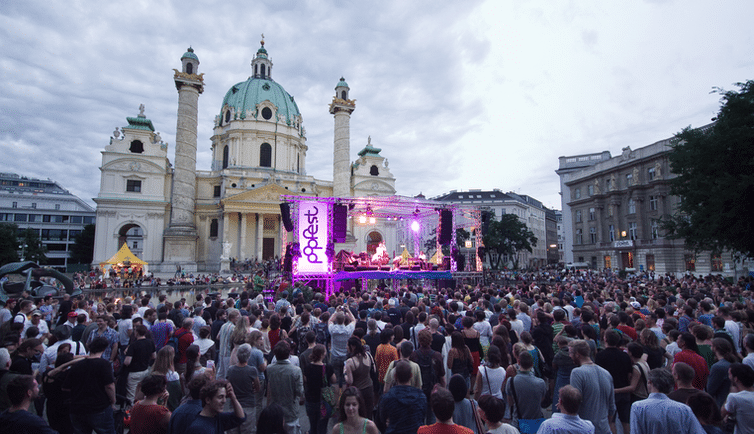 ON THE FRUITLESS SEARCH FOR THE DEFINITE SOUND OF AUSTRIAN POP.
By Robert Rotifer.

It was June 2013. The singer-songwriter CLARA LUZIA had just played a live session on the MARC RILEY SHOW on BBC 6Music when the DJ stumped her with an unforeseen question. Could she tell him the names of a few Austrian peers that listeners should know of? Clara hesitated for a few moments before coming up with “Falco” (Riley: „No, I mean peers…“), then “FRANCIS INTERNATIONAL AIRPORT”. Facing the presenter’s nemesis that is radio silence, Riley quickly changed the subject. That might have been a shame, but even from my desk, with the added bonus of a few weeks pause for reflection, Clara’s stunned reaction seems all too easy to understand. Not because there isn’t anyone to name, rather the opposite. Where to start? Where to find a common thread?

GIN GA, SOAP&SKIN, SWEET SWEET MOON, TANJA FRINTA (with Lonely Drifter Karen) or JA, PANIK are all alternative pop acts from Austria with a considerable degree of international recognition, but sound-wise they don’t have that much in common. Maybe I should start my attempt at an overview back to front, conclusion first: If there hasn’t been any characteristic Austrian pop phenomenon since nineties’ downtempo, it might just be because of the endless variety of what has surfaced since. Seen in a positive light, this variety is the Austrian pop phenomenon of the last ten years. In the nineties the digital democratisation of the means of production broke the monopoly of commercial studios and paved the way for the largely homemade electronic boom.

But along with the onset of the Pro-tools age (ironically now increasingly replaced by the analogue revival), this liberating effect was extended to pop and rock music played with analogue instruments, resulting in an explosion of self-releases and small labels. Any narcissus with a bank loan, but also many a genuine talent with seemingly uncommercial tastes could suddenly release their own record. The fact that from 1998 on the public alternative radio station FM4, formerly only broadcasting at nights, suddenly had 24 hours of airtime to fill, accelerated a development which would result in something like a normalisation of the previously underdeveloped Austrian pop landscape.

Beyond that the singer-songwriter scene also created a new audience for unflinching solipsists like BERNHARD SCHNUR, NORB PAYR, Georg Altziebler aka SON OF THE VELVET RAT and ERNST MOLDEN. At the turn of the 2010s the latter, having sung in German received pronunciation before, exorcised the Viennese dialect from the clichés of 1970s and 80s so-called “Austro pop”. In doing so, he found common ground with his younger fellow maverick DER NINO AUS WIEN, who featured RAPHAEL SAS, another major talent, in his backing band. But all that singer-songwriting also manifested itself in a wholly different, new kind of art pop, spearheaded by electronic protest singer Eva Jantschitsch aka Gustav. MAJA OSOJNIK has created her own fusion of electronic experimentation and Slovenian folk songs, WILLY LANDL mixes jazzy ballads with Daft Punk covers, and then there is the sometimes sung, sometimes spoken poetry of Bis eine heult, not to mention MIMU MERZ, MEAGHAN BURKE, SIR TRALALA or Karl Schwamberger aka LAOKOONGRUPPE whose concerts border on performance art.

Not without reason, even the humorous approach of a duo like KOENIGLEOPOLD emanates from the musicians’ collective JAZZWERKSTATT, which is probably even closer to the arts than to the pop scene. And still it’s not too long a way from their world to the kind of place that produces the best rock music in Austria today: The band KREISKY have inverted the traditional Austrian tendency of turning rock into a cabaret or comedy act through their razor-sharp, disciplined and anti – glam ou rous celebration of stiffness punctured by bursts of rage. When Kreisky arrived fully formed, indie rock veterans NAKED LUNCH had already de- and reconstructed the guitar band format by electronic means on their big turning point album “Songs for the Exhausted” (2004), before venturing into the worlds of film (“Universalove”) and theatre (Kafka’s “Amerika”). In 2013 they unleashed another monumental work, “All Is Fever”, which had reviewers throwing around shiny words like “sacral”, “stalactite cave” and “crystal mountain”.

The task of creating forward moving, unabashedly noisy rock music with a melodic pop instinct, has since been taken over by a younger generation of bands like M185, MILE ME DEAF and SEX JAMS, the latter two sharing most of their line-up, not least guitarist WOLFGANG MÖSTL, who emerged from rebellious provincial outsider act KILLED BY 9V BATTERIES and has since become Austria’s prime noise pop poster boy as well as a sought-after producer. His aesthetics are closely related to those of acts like MONSTERHEART, DIE ETERNIAS, LUISE POP or VORTEX REX as well as anyone who has released music on labels like FETT KAKAO, WILHELM SHOW ME THE MAJOR LABEL or TOTALLY WIRED RECORDS, beacons of a burgeoning DIY pop scene that includes JUST FRIENDS AND LOVERS, PLAIDED, CRYSTAL SODA CREAM, GOLDSOUNDZ, GRAN, BRUCH and ANA THREAT (also part of the brilliant garage punk duo THE HAPPY KIDS with self-appointed trash pop historian AL BIRD DIRT). What unites them all is a consciously feminist consensus, an aversion towards rockist gender stereotypes and a healthy disdain for the norms of professionalism that are omnipresent in a land that regards musical education as something akin to correct table manners.

Another scene that adheres to a similarly DIY ethos is the noticeably booming sixties-psychedelic/trash/ garage/rock’n roll revival of recent years, noisily represented by bands like WILD EVEL & THE TRASHBONES, the not so fundamentalist SADO MASO GUITAR CLUB (both off-shoots of the Graz-based band THE INCREDIBLE STAGGERS), garage beat survivors THE JAYBIRDS, BO CANDY AND HIS BROKEN HEARTS from Burgenland, BEAT BEAT from Carinthia, BLACK SHAMPOO and the francophile combo MOPEDROCK!! from Vienna. Clara Luzia could have told Marc Riley all of this if she had been given the time. And even then she still wouldn’t have mentioned other recent phenomena like FIJUKA, NEUSCHNEE, STEAMING SATELLITES, WE WALK WALLS, POP:SCH, CRAZY BITCH IN A CAVE, KOMMANDO ELEFANT, AMERE MEANDER, or GODS (formerly BENSH). It seems any search for a definitive Austrian sound would be bear little fruit. There’s just too much going on round here for a narrow concept like that.