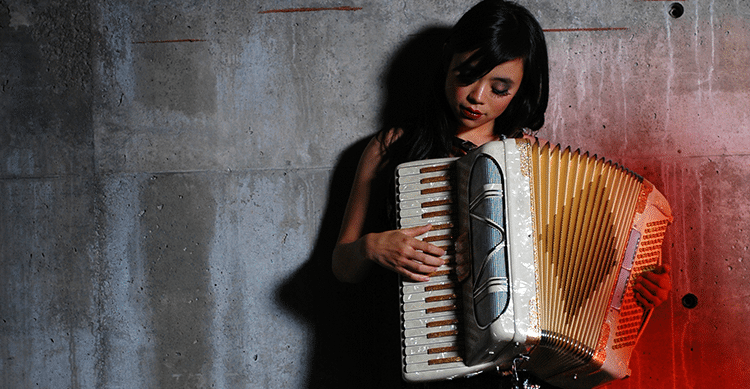 After last year’s successful installment of the Austrian World Music Awards, the new bestowal of the significant award for the Austrian world music scene will take place once again at the end of this year. The recent call for applications was well received: organizers counted more than 120 submissions for this year’s awards. The competition of the Austrian World Music Awards not only illustrates the stylistic development of the past decade in Austria, but also provides an important platform for the younger generations with the opportunity to demonstrate their skills in front of a selected jury of experts and an interested audience. The eagerly awaited selection of finalists will perform live at the award ceremony in the Viennese music venue Porgy & Bess on December 4, 2015, gathering some of the most creative musicians and ensembles from the Austrian world music scene.

ALMA’s music undoubtedly has its roots in Austrian folk music, but can also be seen by some as a winking nod to this form of music. All of the members grew up in musical families, with traditional music already playing a major role at an early age. In the sense of out with the old and in with the new, the five young musicians breathe new life into old traditions, while leaving enough space to explore their own musical origins. These are wildly interpreted and uniquely set into a new context. ALMA playfully combine folk music down-to-earthness with complex arrangements. Realizing their own vision of how Austrian folk music should be adapted for the present time and its audience, ALMA play their instruments – violins, bass, accordion and vocals – with tremendous ease, passion and imagination, letting their roots blossom into colorful and varied flowers. www.almamusik.at

The five-membered band around the accordionist and singer Franziska Hatz performs at a very high artistic level and presents humorous pieces mainly from the klezmer tradition, as well as self-composed works with influences from pop, folk-rock, ska and jazz. Even Austrian “yodeling” and electronic music finds its way into their music. Far off from any restrictions, their music is as diverse and captivating as it gets. With noticeable liveliness in every tone, Das Großmütterchen Hatz Salon Orkestar walk the fine line between various styles and musical traditions, creating a unique blend that is rarely achieved elsewhere. www.gmhorkestar.at

The music of the accordion duo Dinovski-Schuberth is all about provocation and improvisation. Playing together since 2013, the two young accordionists from Upper Austria (Schuberth) and Macedonia (Dinovski) like to indulge in their mutual passion for Balkan music, Scottish and Irish sounds, jazz and contemporary music. From these artistic starting points they move on to their own musical language and aesthetics – a forceful, sometimes restrained, new form of music. The two musicians share a common desire to improvise without any rules. Dinovski-Schuberth see it as their duty of artistic existence to express the vulgarities of life with music. The telling name of their first CD is “Improvokation”. Duo Dinovski-Schuberth

The ensemble Federspiel was founded in 2004 in Lower Austria and audaciously combines local folk music with world music elements. Federspiel’s musical signature is above all characterized by the origin and background of each of the seven musicians – all of their (musical) biographical stories inevitably have some kind of impact on the ensemble’s music. In this sense, Federspiel’s repertoire ranges from self-composed works with pop elements to arrangements of traditional Mexican music or the zither as a solo instruments. In the past few years the ensemble Federspiel has become one of the most interesting ensembles in the European wind music scene. Awards: Ö1 – Pasticcio Award, German Record Critics’ Award (Best List 2012), Audience Award of the Austrian World Music Awards 2011. www.feder-spiel.at

Originally from Iran, the musician Mahan Mirarab has been based in Vienna since 2009. Within a short period of time, the talented guitarist with his wide-ranging music styles not only made connections in the local music scene, but also built a name for himself beyond Austrian borders. Although tolerated, jazz is frowned upon in Iran and so Mahan Mirarab learned to play the guitar as an autodidact. With just the same dedication, he also invested his time and passion into the traditional string instruments oud and tar, as well as the fretless guitar. Mahan Mirarab plays in various formations, composes film music and is involved in several projects. Together with his band and supported by the remarkable voice of Golnar Shahyar, the young artist presents poetry made up of traditional Persian sounds with jazz influences. www.mahanmirarab.com

Vusa Mkhaya began his musical career at an early age in his homeland Zimbabwe. He then continued his musical education with studies in Graz, Styria. As a member of the award-winning Zimbabwean vocal trio Insingizi and various other internationally renowned projects, Vusa Mkhaya has become an indispensable part of the Austrian world music scene. In his homeland he is celebrated as the hope of Zimbabwean music which he carries into the world. With his fresh musicality and witty lyrics, he shares his perspective on life and his experiences in a fast-paced world. Vusa Mkhaya’s openness to other cultures and his own diverse background gives the musician the ability to conjure musical magic that is highly infectious and captivating. www.facebook.com/Mkhayamusic