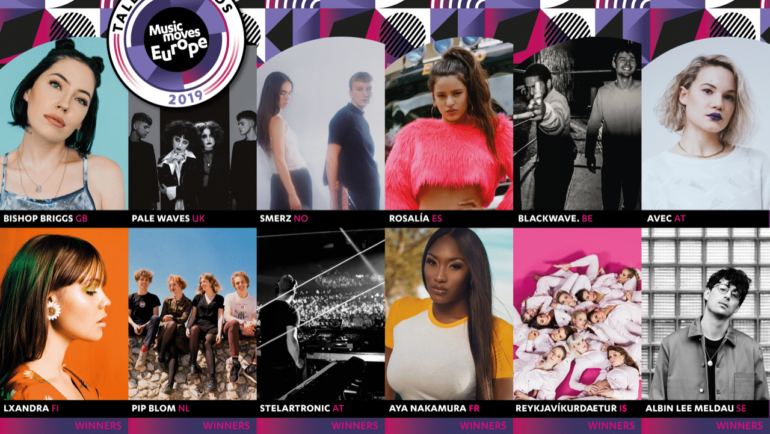 The first winners of the MUSIC MOVES EUROPE TALENT AWARDS have been revealed. Following the announcement of the twenty-four nominees at Reeperbahn Festival, an international jury selected twelve winners, who represent the European sound of today and tomorrow. Austrian Music Export is very honored to announce that two winners are from Austria, AVEC and STELARTRONIC.

The Music Moves Europe Talent Awards are the new European Union Prize for popular and contemporary music. The prizes will be awarded at ESNS (Eurosonic Noorderslag) in Groningen. Additionally, the general public will select another winner from each category through the Public Choice Award through online voting, starting today. The Public Choice Award winners will be revealed at the award ceremony on Wednesday January 16, 2019.

Out of six genres these acts win the Music Moves Europe Talent Award:

With AVEC and STELARTRONIC, one can see Austrian artists on the rise. 23-year-old AVEC won a loyal fan base early on and now celebrates international success. With Stelartronic, Austria´s electro swing pioneer Marcus Füreder – aka Parov Stelar – is returning to his roots.

AVEC appeared out of nowhere in 2015, but she was already exceeding expectations with her first recordings. Today her song “Granny” has been streamed almost 6 million times on Spotify. Her new album “Heaven/Hell” reveals itself as the step forward many had hoped for. The last few years with the sudden fame, the attention, the intense time on the road and performing at numerous international festivals have shaped AVEC: “I just feel more mature today and see things in a different light,” she says.

Her songwriting is stylish and intriguing, never obvious. (Jury statement)

STELARTRONIC is a side project of Marcus Fuereder aka Parov Stelar. He is considered to be an electro swing pioneer, blending electro-house basslines and 1930s inspired swing. With that vibrant sound Parov Stelar routinely thrills audiences all over the world and fills venues up to 100.000 people. With Stelartronic, he is coming back to his roots, to electronic music as he produced it 10, 15 years ago, calling this new genre “electro shock”.

Stelartronic is different and original at the same time. Production complexity hidden behind an easy-to-consume formula. (Jury statement)

The aim of the Music Moves Europe Talent Awards is to celebrate new and upcoming artists from Europe and support them in order to help them develop and accelerate their international careers. Therefore, the prize package consists of € 5.000 tour and promotion support, several performances at ESNS, free publicity and a tailor made training programme.

Music is one of the most popular forms of art, widely consumed, and a vibrant expression of Europe’s cultural diversity. Music Moves Europe, the overarching framework for the European Commission’s policies and actions in support of the European music sector, and Creative Europe, the EU funding programme for the culture and audiovisual sectors, aim to help the music sector flourish by, among other things, supporting the European Border Breakers Awards in previous years. As from now, to enhance creativity, diversity and competitiveness even better, this former prize is being replaced by the annual Music Moves Europe Talent Awards.