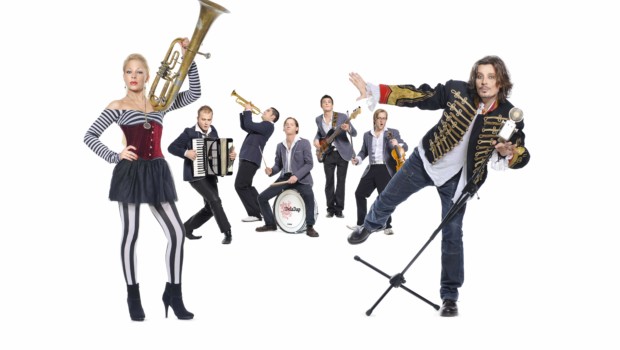 Danceable is the keystone of the Viennese band !DelaDap, which encompasses a diverse cosmos of sounds from folks music to disco, as well as traditional elements harking from eastern Europe and the near East. The mastermind of the project is the DJ and producer Stani Vana, who has worked with a host of notable guest musicians and for the last three years, has quickly garnered a larger following and well received albums.

To be fair, giving traditional Balkan folks music an updated beat heavy and pulsating sound is a trend which !DelaDap shares with an eclectic, however small group of groups worldwide. In any case, the band has been a forerunner for this sound within Austria, and especially Vienna, where they have been especially successful in establishing their sound and popularity.

It all began with the collaboration between the pianist Tibor Barkoczy and the vocalist, Melinda Stoika, the trio formed the fundament of the !DelaDap sound. Over the following years the spectrum of the band’s sound has evolved, as well as the expansion of participating musicians to a pool of over 30 members. Over the course of touring, the band developed an intuitive approach to songwriting, which was spurred by months of live improvisation, and was crucial to the development of a unique and specific sound, and spontaneous compositions which would be the foundation for their albums. The core of the live band had now grown to include: : Aleksander Stoijic guitar, Jovan Torbica double Bass, Alen Dzambic accordion, Pavel Shalman violin, Simona Senkiova und Kristina Gunarova vocals. Rather than utilizing a drummer, DJ Stani Vana uses digital samplers and beat makers, as well as interactive tools which allow for more spontaneous interactions with the other musicians. Although the band improvises in a live context, the song forms are often more simply arranged, and given a more fixed structure for live performances.

For a band such as !DelaDap which transcends the traditional folks music, there arises the question of the socio-political positioning of the group, which can be understood in two ways:  On the one, the  overcoming of the individual mode of the musicians, of the personal connections of the musicians to the tradition, and the other, the will of their desire to break with indigenous tradition and allow new influences to breech the old. !DelaDap has reached a break with tradition, the refusal of tradition affirmation of what distinguishes relevant artists, and their development is more rooted in the mingling of influences of urban sound topography, and in following the tributaries of new musical constellations.

At the end of the day, Vana doesn’t want to place too much burden on music, and doesn’t think he can break down any socio-political mountains, but does feel the potential for change and raises questions, like,” what is Romani, where do they come from….what makes up this minority etc.” The bridging of cultures and nationalities which !DelaDap embodies, stems from open intercultural connection and integration, with dance and community as its lowest common denominator. In this way it can be expected to see this project as staple of club life for a long time to come.
David Weidinger
translated from German by Austin Settle
Photo © Josef Fallnhauser/Studio Trizeps