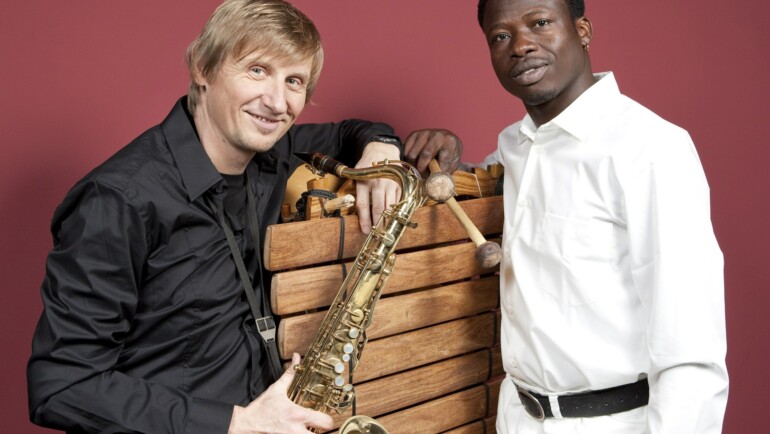 Almost every day, the news headlines are full about people who are currently trying to get to Europe from Africa. However Africa does not only stand for refugees, hunger and war, but also for culture. This scene portrait by Jürgen Plank is a close look at African musicians in Vienna as well as African musical traditions.

Mamadou Diabate, Sidy Keita, Haja Madagascar, Lamin Camara, Salah-Addin, Diakali Kone, to name just a few – the African Diaspora, which has spread African culture and its distributors for centuries around the world, extends always further and has reached Austria. In the opposite direction, Austrian musicians are experimenting with African musical traditions which often result in collaborations. It is therefore not surprising that one of the central figures in the Afro-Austrian music scene is a jazz saxophonist who originally comes from Germany but has lived in Vienna since the 1980s: Sigi Finkel.

“I always liked the energy and complexity of African rhythms. I then thought, it would be exciting to combine the rhythmic levels with my own roots in jazz and create something new,” explained Finkel about the start of his experimentation with African music. That was in the middle of the 1990s.

“For me the theme of Africa has been my focal point for many years and it is a part of my musical life.”

Said and done: from 1997 until 2008 he propelled the project Sigi Finkel & African Heart in which he played together with musicians from west Africa. The band has four CDs and can put on its list of accomplishments concerts in Europe as well as in Zimbabwe, Burkina Faso, Morocco and Tunisia and has left a lasting impression on the African music scene here in Austria. Finkel continues to this day, even after the break up of African Heart, to stay true to African music. Now he plays together mostly with the Vienna-based balafonist Mamadou Diabate. Unforgettable for Finkel was a joint performance once on a main town square in Diabate’s homeland of Burkino Faso. While still in Vienna, he prepared and learned some traditional folk pieces together with Diabate, and then at the performance he was able to completely amaze the villagers.

“For Me the Theme of Africa has been my focal point for many years and it is a part of my musical life.” said Finkel. This has nothing to do with exoticism. The musicians with whom he plays are friends, and to whom he has very much to thank: “Through the African music I have been able to escape from the tight corset of jazz.”

Both Finkel and Diabate believe festivals such as KASUMAMA Africa Festival in the Waldviertel of Austria or the African Days Vienna  which put the focus on African music are extremely important.

Eleven times at the African Days in Vienna

Whoever is looking for African music in Austria can find it in many places. DJ Zipflo has specialized in it, and whoever wants to hear all about it from an expert of the material, then he is at the right address. Apropos address: in the Liechtensteinstraße in Vienna’s ninth district, one finds the African restaurant Sagya, where alongside regional meals often live concerts from many different musical directions are served – and here we see again the above mentioned collaborations beyond all boundaries, because here musicians from the whole world play music together.

The KASUMAMA Africa Festival has Africa as a theme every year: the star guest is Habib Koité who has also sold out the Vienna Konzerthaus. Additionally from July 31st until August 16th, the festival Africa Days takes place on the Vienna Danube Island – for already the eleventh time. Finkel and Mamadou Diabate are at both festivals this year, by the way.

“In these collaborations I always try to bring together on stage both of these cultures.”

Just like Koité, Diabate is a Griot, that is the title for a professional singer, story teller and poet in west Africa. Diabate comes from a musician family and grew up in the border region to Mali. In Burkina Faso, balafon players can use their instruments as a means of communication. “We speak through music,” said Diabate and explains about a dialogue between a balafon and vocal members of the audience that can last for a while. In Austria he has developed the balafon music of his country further by writing his own pieces and creating bridges in another directions: over to Jazz and to other boundary breaking musicians such as Karl Ritter, Otto Lechner and Wolfgang Puschnig, with whom he has already collaborated. “In these collaborations I always try to bring together on stage both of these cultures.” explains Diabate.

He has learned a great deal from the jazz scene, says Diabate, but he does not see himself as a jazz musician. He draws from the traditions of west Africa and categorizes his own compositions between Pop, Rock and Jazz. What especially interests him are the quiet nuances and subtleties. “In my music, all colors are included” Diabate says. In his pieces, it is always about the connections, about the living together, thereby the proximity to political questions is inherent. When Diabate sings his own pieces in west African languages such as Bambara and Dioula, he explains afterward to the Austrian audiences what the piece is about.

Different from Diabate, his Senegalese colleague Cheikh M’Boup places the power of rhythm at the center of his music: M’Boup plays traditional drums such as the Sabar and Dun Dun, but also Afro-Cuban bongos and congas. In Vienna, the percussionist and singer has often played together with Diabate. When they do, it is enough for Diabate or him to just mention a theme – the other knows exactly  how to join in, explains M’Boup: “This is the original jazz of African music.”

M’Boup once co-founded a legendary group: Tam Tam D’Afrique was one of the first African bands in Austria. In his music, he draws especially from the country of Senegal and uses its native drums: “The Saber is used in all occasions, for healing and for celebrating.” His last project was called Deep Energy, but every few years he does something new, says M’Boup, who builds most of his instruments himself and has also appeared on the CD From Café Drechsler as a guest musician. He simply “drummed” the earlier members of Tam Tam D’Afrique together – in the real sense of the word. One can really look forward to what may be coming next.

The founding of Tam Tam D’Afrique came at the beginning stages of the African music scene in Vienna, upon which Sigi Finkel can remember well: “When I started with African Heart, we were pretty much all on our own.” Mostly because the was no Crossover yet, which has since then dominated the scene.

“We create pieces that come from west African originals, either from the rhythms or the songs”

In Mamadou Diabate’s homeland of Burkina Faso, Karin Mitterbauer also travelled, internalized, and took lessons with native teachers. In the meantime she now teaches percussion herself. Mitterbauer plays mostly Djembe and has played with her group Affenbrot for over twenty years the music of west Africa, whereby she often collaborates with African musicians. The core of the group is formed by five female Austrians: “We create pieces that come from west African originals, either from the rhythms or the songs” says Mitterbauer in an interview with mica. They utilize traditional instruments such as the Balafon, Kora and Ngoni. With the addition of accordion and recorder, the group Affenbrot  has been able to create a fusion with Austrian folk music on their latest CD.

Similar to Sigi Finkel, Mitterbauer was at first thrilled by the rhythm of African music: “The effects of the rhythm, the stimulation to dance, is fascinating”, said Mitterbauer.

However African music is very diverse and reaches from the powerful rhythm sections of west Africa to the female choruses in the south with the blues of the desert somewhere in the middle. Haja Madagascar, who also lives in Vienna, comes originally from – nomen est nomen – the island of the same name but is on the other hand to be viewed as a singer-songwriter in the US American tradition. With his formation The Groovy People, he wants to bring together all the musicians of the African Diaspora.

The musicians from the continent south of Europe all seem to be continually in motion, even here in Austria. The Sudanese guitarist and singer Salah-Addin works from Vienna, although he is currently staying in Berlin. In Vienna, he brings his meditative blues with various formations before audiences – Desert Blues is what Salah-Addin himself calls his own style, which comes from the Sudan but leaves openings and allows space for excursions in the direction of Sufi traditions or Raggae. The recently deceased percussionist Courtney Jones from Trinidad often provided energy and drive for Salah-Addin live onstage.

Some musicians come and leave again: the Kora-virtuoso Solo Kouyate from Senegal often lived in Vienna during the 2000s-years and tells the stories of his homeland in virtuoso ballads.
The Rai musician Kadero Ray has lived in Vienna since 1997 and started his international career here. Kadero Ray was born in Morocco in 1972, and in Vienna he founded together with Otto Lechner the internationally manned Vienna Raï Orchester: next to the two of them were involved musicians from Tunisia, Iraq and Austria. Thereby bridges were again created to cross between Africa and Europe on a musical level. Because the scene is so strongly and tightly linked, it does not surprise us that also Sigi Finkel has played with Kadera Ray.

Being on the Move

Themes such as Migration and Integration are currently in the scene. “One time someone came up to me and said: ‘You present the Africans in a completely different light as the Boulevard-Press”, explained Sigi Finkel. Away from the asylum-seeker and drug-dealer cliches. “The music must stand in the foreground, even when the collaborations with African musicians also contain this important side effect” says Sigi Finkel and points out ten years ago it was much easier to get entry visas for musicians from Africa.

KASUMAMA: African Music in the Waldviertel of Austria

The music label Atlas Music Pro of Katrin Pröll released a CD by Kadero and thereby did its part in establishing the African music scene in Austria. Pröll continues to do so, after all she is today significantly bound also into the organization of the KASUMAMA Africa Festival. “In the meantime, there are already many other festivals like the CHIALA Africa Festival in Graz, but KASUMAMA concentrates very strongly on local domestic African bands” says Pröll. A goal of the KASUMAMA Africa Festival from the beginning was to present Africa away from the cliches. “The people from this region have finally fully accepted the festival” explains Pröll about past festival years in the Waldviertel village of Moorbad Harbach. This year will prove again: the African music scene in Austria is creative, appears confident, and is open to many directions and influences. The use of workshops is very important. “African Music has, aside from the festivals, still a bit of a borderline existence. That is only a small piece of the larger cake of possibilities that could be offered”’, describes Sigi Finkel in spite of all the positive developments in the current state of the African music scene in Austria.