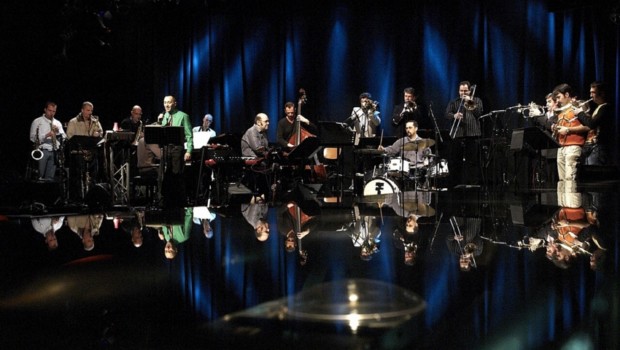 The Austrian big band scene witnessed a remarkable boom in recent years. Despite losing their most famous figurehead. By Andreas Felber.

The glory days are a long time back: In the Swing era of the 1930s, big bands were considered as hip – the pop bands of the time, with people dancing to their music and indulging in their interpersonal interests. Ever so often the genre was declared dead after 1946, when big band music in the U.S. was induced with a 20% entertainment tax and subsequently eight renowned orchestras – including those of Benny Goodman, Woody Herman and Harry James – simultaneously gave up. Despite prophecies of doom and economic difficulties big bands still existed and they exist to this day. Especially since the 1990s, the breeding ground for grand jazz ensembles has become even more fertile: Yes, big band jazz is back! This could be related to the currently observed swing revival, initiated and supported by pop stars who are looking for image renewals and new target groups: lets just recall Robbie Williams’ tribute to Sinatra with “Swing When You’re Winning”, Roger Cicero storming the pop charts with his big band swing songs, and even the Belgian crossover tenor Helmut Lotti with “Time to Swing” (2008), demonstrating the broad impact of the new genre.

Moving Away From The Glenn Miller Sound

Beyond these jazz orchestral nostalgia trips, big bands in Austria have experienced a remarkable renaissance in recent years. And this even though the scene lost its best known and longest-serving figurehead. In July 2010, after 33 years, Mathias Rüegg declared the dissolution of the Vienna Art Orchestra (VAO), which had just before opened a new chapter in the ensemble’s history with the transformation into a chamber orchestra with jazz soloists. “Chronic underfunding, a massive drop in demand from the core countries of Austria, Switzerland and Germany, as well as an economic contingent collapse of countries such as Italy, Spain or France led me to this decision,” Mathias Rüegg published in his explanation on the VAO website, which he titled  as “Game Over”. With this Austrian jazz scene lost its backbone in the scene and a major talent forge, where brilliant musicians emerged, such as Wolfgang Puschnig, Harry Sokal, Thomas Gansch and Georg Breinschmid. 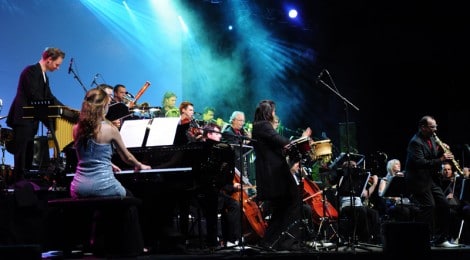 Nevertheless the local big band jazz of recent years has been thriving and flourishing. Whether this is because “today there are more musicians available than ever”, as Mathias Rüegg reasons, or due to the fact that “after many years of electronic music the people now want to see real musicians on stage again,” as the Viennese big band director Christian Mühlbacher formulates, who also sees opposing trends to the swing music surge: “In the minds of the people the big bands have also managed to move away from the Glenn Miller sound.”

This is precisely what Mühlbacher has been working on since the mid-1980s with the big band Nouvelle Cuisine, which is jointly led with pianist Christoph Cech. Over the years this formation has evolved from a style-pluralistic postmodern ensemble to an orchestra that has found its own contemporary signature with compositions by the two leaders, which are characterized by advanced harmonics and contrapuntal voice leading. Nouvelle Cuisine’s most recent CD “gDoon” was presented in the year 2009, whereas the title is to be understood as onomatopoeic: The music was – as in Mühlbacher’s “Faast” – developed from sometimes electronic influenced grooves, smooth and yet original, giving enough room for the highly concentrated solo dosages by musicians such as saxophonist Clemens Salesny.

Since 1997 Christian Mühlbacher has also been operating the orchestra Mühlbacher etc., which for a decade only performed once per year – respectively on the 5th of  April in the Viennese jazz club Porgy & Bess – before it fledged out in 2007. Besides the groove based, powerful big band sets of this 20-membered ensemble, foreign compositions for Ennio Morricone,  Sun Ra over to Johann Sebastian Bach and James Brown are also found in their repertoire. In September 2012, the ensemble performed Mühlbacher’s composed paraphrase of Anton Bruckner’s 4th Symphony in the Upper Austrian Brucknerhaus Linz.

Among the younger musicians of the Viennese scene are the two former Vienna Art Orchestra soloists Thomas Gansch and Robert Bachner, who have moved forward with their own big band projects. The most autonomous approach in terms of orchestral jazz composition comes from the Graz-native and now Viennese-by-choice trombonist and composer Daniel Riegler with Studio Dan, which is undoubtedly one of the most exciting band offsprings that have emerged from the Jazz Werkstatt Vienna. The 18-membered big band, that frequently turns into a chamber orchestra or a contemporary music ensemble, introduced itself on the double album “Creatures & Other Stuff” (2009) as an adventurous style poaching force that has no fear in juxtaposing abstract sound insertions with earthy grooves. Stravinsky meets John Zorn and Frank Zappa (note: the ensemble name is derived from the 1978 record “Studio Tan”): This striking formula could be determined as a brilliantly staged style metamorphosis. In 2010 Studio Dan once again showed a very different, exciting approach on their second album “Things” with songs by vocalist Nika Zach. 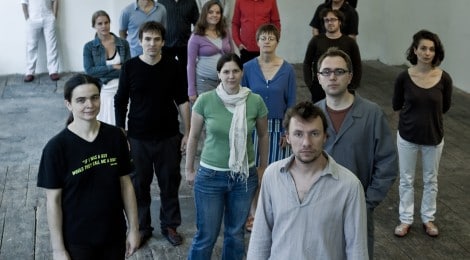 Standing out among the young Viennese tamers of the massive big band creatures is also Gerd Hermann Ortler. Originally from South Tyrol, the saxophonist, composer and arranger who studied jazz at the University of Music and Performing Arts Graz with Ed Partyka and Bob Brookmeyer is rightfully talked about as a brilliant upcoming talent. As you can hear  on the 2011 released debut CD “Hermannology” of his 23-membered GHO Orchestra, Ortler loves rich horns, which he understands how to transform into full color epics. He also enjoys retelling known stories in unconventional ways: his shrewd big band arrangement of Madonna’s “Like A Virgin” was awarded with the “Student Music Award” by the Chicago magazine “Downbeat”. In the 2011/12 season the “GHO Orchestra” performed as the very own stage band of the Viennese club Porgy & Bess.

The list of the most important jazz orchestras in the Austrian capital city would not be complete without mentioning the Vienna Improvisers Orchestra (VIO) , founded in 2005 by saxophonist and violinist Michael Fischer. As documented on the 2012 released double CD “Vienna Improvisers Orchestra 2006-2010”, Fischer structured  – in the wake of the “Conductions” concept by Butch Morris – the free improvisation process with means of hand signs – whereas he also likes to confront his conducted collective with experimental poetry by the likes of Gerhard Rühm or Gerhard Jaschke.

The VIO found its Styrian counterpart in March 2012 with the Styrian Improvisers Orchestra, a 20- to 25-membered orchestra  initiated by the Association New Music Graz and led by vocalist Annette Giesriegl and guitarist Seppo Gründler. The dactylology of conducting is based on that of the – also influenced by Butch Morris – London Improvisers Orchestra, whereas the changing conductors sometimes develop their own hand signs in order to structure the free improvisation process.

The most famous jazz orchestra from Austria’s second largest city is the Jazz Big Band Graz. Founded in 1998 by Sigi Feigl as a mainstream oriented orchestra, that among others others collaborated with the “New York Voices”, Jon Hendricks and Bob Mintzer, the big band was able to sharpen their profile and raise international attention in 2003, when Heinrich von Kalnein and Horst-Michael Schaffer took over the leadership. After restarting with the program composed by John Hollenbeck “A Life Affair” (2005, with vocalist Theo Bleckmann), Schaffer presented himself as a composer for the “Electric Poetry & Lo-Fi Cookies” (2008), combining theremin sounds with influences of digital electronics and minimal music elements, as well as integrating spoken-word interludes. 2012 followed with the album “Urban Folk Tales” released by ACT Music and featured among others Theo Bleckmann, Nguyên Lê and Gianluca Petrella as guest soloists. 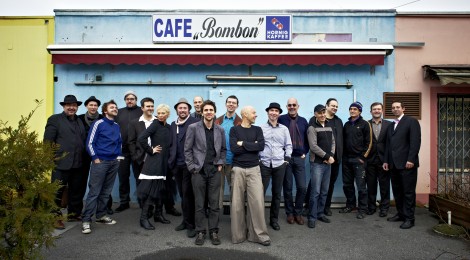 Similar to the Jazz Big Band Graz, but without their international reputation and conceptual sovereignty, are  Upper Austrian Jazz Orchestra (UAJO) from Upper Austria and the Lungau Big Band from Salzburg. The former ensemble, founded in 1991 and led by saxophonist Christian Maurer, oscillates between programs with notable international soloists and guest arrangers, such as Kenny Wheeler, Jack Walrath and Michael Gibbs (CD “101 Years Glenn Miller”, 2005), as well as those in which the musicians themselves act as composers and impressively demonstrate this in the context of the programs released on CD “La Lampe Philosophique” (1999), “Deference to Anton Bruckner” (2003) and “Dessöwe Aundas oder Thomas Bernhard groovt” (2004). The more recent programs are devoted to the music of Friedrich Gulda, Wienerlied (CD “Wein, Weib und Gesang” 2008) and the scoring of texts by Austrian authors from Semier Insayif to Gerhard Ruiss (CD “Song-Song oder 7 Musen und 4 Laster”, 2009). The world premiere of the program “Ohne Musik wäre das Leben ein Irrtum oder Eine kleine Betrachtung für großes Orchester“ in fall 2012 brought the UAJO, that has excellent soloists such as Maurer and trombonist Robert Bachner, together with the comedian Gunkl.

The Lungau Big Band (LBB) founded in 1983 by trumpeter Horst Hofer is the jazz orchestral “top dog” of the Salzburg jazz scene: Unlike the Jazz Big Band Graz and the UAJO, the LBB is more oriented towards traditional jazz, reflected in the early years of  Glenn Miller and Benny Goodman programs, while later alongside Count Basie and Duke Ellington pieces of Thad Jones, Toshiko Akiyoshi and Peter Herbolzheimer, self composed works were increasingly included in the repertoire. As guest musicians the big band featured among others Ray Anderson, Randy Brecker, Bob Mintzer and James Morrison. With “The Monk’s Progress” (2005), composed by saxophonist Robert Friedl and pianist Burkhard Frauenlob, inspired by the so-called “Monk of Salzburg”, a late medieval song writer and composer, the LBB produced an ambitious program with a Salzburg connection on CD.

The West Follows: What The CIA Has To Do With The Vorarlberg Jazz Scene

In West Austria important bands have also been formed in recent years: The Jazz Orchester Tirol (JOT), founded in 2001 by trumpeter Martin Ohrwalder and led by former “Vienna Art Orchestra” saxophonist Florian Bramböck, understands itself as a focal point of jazz in, around and from Tyrol. In 2003 the first CD of the ensemble, titled “Neue Lieder” included compositions exclusively by the band members and Tyrolean composers. 2007 followed with “Tagebuch einer Eintagsfliege”, with Martin Ohrwalder’s eponymous four-movement composition at the center. In 2011 the Jazzorchester Tirol was very successful with a big band version of the legendary “Halben Doppelalbum” of the deceased Werner Pirchner, who poked fun at the conservative establishment of his Tyrolean hometown in a provocative and satirical musical manner. 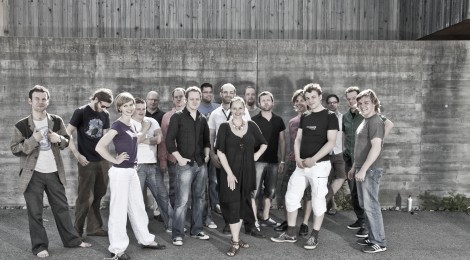 Similarly organized is the Jazz Orchestra Vorarlberg (JOV), initiated in 2005 and led by trumpeter Martin Eberle, who also wants to provide a forum for his local peers. The JOV can refer to the debut album “Introducing The Jazz Orchestra Vorarlberg” (2010), which includes compositions of trombonist Phil Yaeger. As part of the Jazz Festival Bludenz the young musicians also collaborated with Peter Herbert, Lucas Niggli and – in 2012 – with Uri Caine.

Partly responsible for the remarkable upsurge of jazz in Austria’s most western province is pianist Peter Madsen: The musician who was active in New York for many years, accompanied Stan Getz on tour in 1987 and later worked with Mario Pavone and Fred Wesley, moved to Vorarlberg in 2001. Here the 57-year-old teaches at the Jazzseminar Dornbirn and gathers the most talented young improvisers of the region to collaborate as the Collective of Improvising Artists (CIA). With this orchestra Madsen performed a Sun-Ra-Suite in 2008 at the Feldkirch Festival, and went on a musical world tour to promote the CD “Thousand Miles Journey”, with stops including China, Iran, and New York.

Given this diversity of notable orchestras, the above-described scenario can see itself as impressively confirmed: They are back in season, the powerhouses of improvised music, the elephants of the jazz ensembles. Despite the gap left by the “Vienna Art Orchestra”, Austria still seems to be a fertile ground for contemporary jazz music.
Andreas Felber
(translated from German)